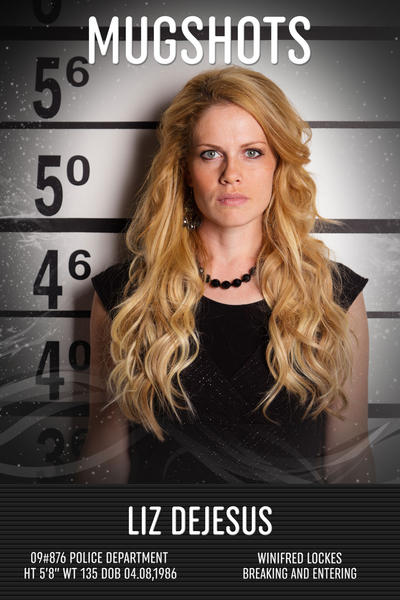 Once upon a time on a living room couch far far away…a friend sent me an illustration of Snow White. Except that this wasn’t a typical Disney drawing or illustration. This Snow White had a wicked smirk on her face, her makeup was smeared and looked as though she had been pulled away from someone else’s lips while in the middle of a make-out session…and she was holding a sign with numbers on it. This was Snow White’s mugshot and she was being arrested for sexual misconduct. And this wasn’t the only one. There were four illustrations in this series. Fairy Tale Mugshots, drawn by Marilen Androver. Snow White, Alice (from Alice in Wonderland), Red Riding Hood and Goldilocks.

I loved each one on sight.

Not only that, I was curious. And anyone that knows me, knows that I love fairy tales and I’m a curious person (very similar to our dear Alice). The more I looked at these images, the more I asked myself ‘How did they get arrested in the first place?’, ‘What lead them to commit these crimes?’, ‘What are their personalities like?’, ‘Are they innocent…or guilty of the crime?’. So naturally I had to answer all of these questions.

This is pretty much my process when it comes to my writing. Some authors have charts, post it notes and are very organized. I wish I were more like that. I’m a pantser all the way. I fly by the seat of my pants and just go wherever my characters want to go. I want to discover things at the same time they do. There are a few things here and there that I do know ahead of time but very rarely does that happen. And the great thing about writing is that everyone has a different process. Everyone has their own unique way of bringing characters to life.

I like writing the old fashioned way, pen and paper. It’s a sensory thing for me. The soft, smooth paper, and the needle tip pen (my favorite kind) softly scratching against the paper. *happy sigh* That’s really all I need. So I get lost in the sound and the story that I’m working on at that particular moment.

And sometimes, I get inspired by works of art like it happened with Mugshots. I had the pictures saved on my cellphone and whenever I needed to do so, I would look at each image and pretend to interrogate them. Sounds insane. I know. But like I said, writers have their own way of doing things. And sometimes Alice would ‘talk’ and tell me bits and pieces of her story (at least what she remembered). Or Holly (my Red Riding Hood) would half growl, half mumble her story at me.

I loved trying to figure out who these women were. What they were addicted to, who they loved, and who they hated. It took me a little over two years to write Mugshots, mostly because I got stuck with some of the research I had to do. I got bogged down by the details and didn’t focus on the actual story. What happens when you get arrested? What is it like to get fingerprinted? And the famous mugshot? How was that going to happen? Lots of things that needed to be taken into consideration. So I ended up going with a small police station and kept it all as though it were happening in a small fictional town.

I had an amazing time writing this book and I sincerely hope that you enjoy reading it as well. If you are a fan of fairy tale retellings with a little bit of mischief and erotica thrown into the mix then you will definitely enjoy Mugshots.

Alice had recently been dumped by her boyfriend, Jack Hart. She’s not taking the breakup very well. She’s picked up a dangerous mushroom habit and has been taking frequent trips down the rabbit hole. Alice and her BFF Kat Cheshire go on a drug infused and sexually charged trip as they make their way toward Wonderland, a new dance club that Alice has been eager to visit. Will she make it out of the rabbit hole unscathed or will she forever be changed?

Holly is a good granddaughter and an antique store owner by day. But by night? She becomes a wolf determined to escape the nightly attentions of her ex-boyfriend, Pyotr. The man that turned her into a monster. After she rejects his advances one time too many he threatens to kill the person she loves the most in the world. Her grandmother. Holly will do anything to keep her safe…even enlist the help of a woman with golden hair.

Winnie loves bears. Some people might say she’s obsessed but she calls it being an avid collector. She is searching for a particular set of bears. They are ‘The Three Wise Bears’ and each one is made out of solid gold. Winnie has two out of three. She’s close to finding the third one and completing her collection. She’ll do whatever it takes to find it…even breaking and entering.

Snow is in a tough position at work….in more ways than one actually. Every night she puts on a show at The Poisoned Apple, her stepmother Cora owns the highly exclusive sex club. And every night Snow entertains the clients by performing sexual acts, but she’s tired of that life. She longs for the day she can quit her job and live with her boyfriend Jerry. But things get complicated when Cora becomes more and more unstable with every passing day. She grows obsessed with Snow’s beauty and popularity. Enough that Snow tries to run away from her controlling stepmother. Will she finally be free from Cora’s grasp? Or will she pay the ultimate price?

Fairy tales like you’ve never seen them before. These wickedly enchanting tales intersect in ways you couldn’t imagine. Enjoy finding out the story behind their Mugshots.

Find out more about Liz DeJesus by visiting her website:
http://www.lizdejesus.com

Posted by Lisabet Sarai at 6:54 AM

This sounds like such a fun book! And I loved the story of your inspiration.

Hi Lisabet! Thank you for having me as a guest blogger on your blog. I had so much fun writing Mugshots that I'm tempted to write a second book using different fairy tales. So we'll see how it goes. :)