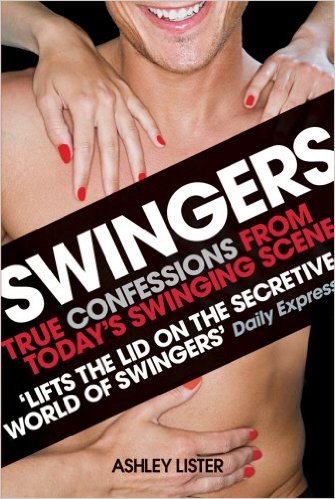 What happens, though, when we step over the line and make those fantasies real? In Swingers: True Confessions from Today’s Swinging Scene, Ashley Lister's scorching non-fiction title from Virgin Books, dozens of real people talk about what it's like to make their particular fantasies come true: ménages a trois, gang bangs, public sex, Roman orgies, lesbian lust, even being ravished by a werewolf. Okay, so the werewolf scenario is still a fantasy, but Walter and Wendy enact this imagined encounter in painstaking detail (on a moonlit night, in a deserted highway rest area, with the help of a rough, hairy stranger solicited via the Internet).

An accomplished erotic novelist, poet and columnist, Ashley has turned underground journalist in order to explore the mostly secretive world of swinging. His stated objective is to share the realities and debunk the myths about people who indulge in recreational sex. Ultimately, though, Ash is a story teller. Instead of a dispassionate examination of the varied activities and conventions of contemporary swingers, he has woven a lusty and entertaining tapestry from the personal stories of their sexual adventures (and occasional misadventures). He mixes direct quotations from his interviewees with his own (presumably imagined!) descriptions of their encounters - explicit sex scenes at least as hot as any you'll find in his novels. Sly Mr. Lister doesn't openly admit that one of his goals is to arouse his readers, but I'm sure that the effects of this book are not accidental.

Most of the voices in this book sound pleased and satisfied with their lifestyles, but Ashley doesn't omit the occasional awkwardness, discomfort, inadequacy and even negativity. One couple he interviews eventually separated, after trying swinging in order to "add honesty" to their relationship. Some couples set strict limits on what activities they're willing to engage in with someone other than their spouses. Some attend parties or sex clubs but never do find what (or who) they really want. Then there's the bizarre but compelling story of Xia, who arrives at a party to be told that she's the evening's "gang bang girl", and who is then fucked so often and so hard that her kidneys are bruised and her sex scraped raw—but who's more turned on by the experience than she's ever been before or since.

My own experience with swinging has been largely consistent with the world described by Ashley's informants. On the one hand, it's exciting to be in an environment where the atmosphere is reeking with sex; where you're encouraged to view others as potential partners, and to flaunt your own sexual desirability. On the other hand, the scripted quality of sex parties ("protocol ... more rigid than you'd find at a Victorian tea party", according to one of Ashley's contributors), and the emphasis on physical attraction, reduce some of the appeal for me. I'd rather be surprised and overwhelmed by lust than expect it.

But of course, that's just my personal fantasy. Whatever your own favorite imaginings, you're likely to enjoy these accounts of people crossing the line to make their secret desires and obsessions real.