My Sunday Snog today is in some sense in honor of Leonard Nimoy. I’ve got a kiss excerpt from my M/M story, “To Boldy Go”, which takes place at a Star Trek convention. The story will be out soon in the altruistic anthology Coming Together: Outside the Box.

Where no man has gone before...

Nothing gives nerdy web developer Jeremy more of a thrill than cross-dressing.
When his best friend dares him to attend a Star Trek convention in drag, though, he's sure he can't pull it off. Sure, dreamy co-trekkie Peter seems convinced. But how will Peter react when he discovers that svelte, sexy Lieutenant Uhura he's been following around the con is really a guy?

When you’ve sampled my snog, head back to Victoria’s place for more Sunday kisses! 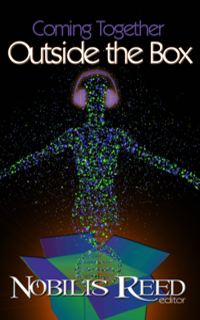 “Let me buy you a drink, Peter.” The contest’s over; the skits are next, followed by the raffle drawing, then the secret guest of honor. The night is still young.

My mouth-watering companion shakes his head. “I’ve got to be getting home. I’ve got a seven o’clock shift tomorrow morning.”

I try to reason with my sinking heart. What did I expect?

“That’s a shame. I’ll walk you to the car park.” I take his arm as we stroll to the elevator, delighted when he doesn’t stop me. I want to savor every last minute of his closeness. “Maybe I’ll call it a night, too. After winning the contest, everything else is likely to be an anti-climax.”

“Yes, I suppose it doesn’t get much better. You’re the most convincing Uhura I’ve ever seen.”

Think how impressed he’d be if he knew the whole truth.

The lift deposits us at parking level. The stink of car exhaust and motor oil drives Peter’s pine-infused cologne from my nostrils. I lean closer to him, breathing deeply to fix his scent in my memory. I’ll think of him in the future whenever I go hiking in the Sierras.

He slides his arm around my waist as we walk. I almost panic. It feels so wonderful, though, that I can’t bring myself to object.

Finally, we halt next to a blue Ford, a few shades darker than his eyes. “Here’s my car.” He releases his hold on me. We face one another, the old awkwardness reasserting itself. He fumbles with his keys. “I guess – um – well, goodbye for now, Jen. Thanks for a great day.”

Frustration, anger and lust roar through me, a strange potent mix. I can’t let him go so easily. I throw my arms around his neck to drag him down to my level, then capture his mouth in a fierce kiss.

“Wait – Jen – please...” I swallow his words, overwhelm his feeble resistance, pry his lips open and plunge inside. Inside, he’s hot, sweet, tasting of the Black Forest Cake we shared at the banquet. He grips my shoulders as if to hold me away from him. At the same time, though, he returns the kiss, sucking on my tongue, thrusting his own between my lips.

That suction – oh! My cock strains at the silly garments keeping it trapped. It’s all I can do not to explode. Logic and reason desert me. I slide one hand down to his crotch, seeking the hardness I know I’ll find there. I’m not disappointed. Peter moans, digging his fingernails into my flesh, but he doesn’t stop me.

I cup, stroke, squeeze. He kisses me harder. If that’s not permission, it’s close enough. Ignoring the potential damage to Lorelei’s leggings, I sink to my knees on the oily concrete. I’m good with my hands; his zipper is open and his rigid dick bobbing in front of my face before he even realizes what’s going on.

Posted by Lisabet Sarai at 7:59 AM