Jeez, it’s Sunday already. Where did the week go?

Anyway, that means it’s time for another snog. This is number 165, believe it or not. I’ve been posting kiss excerpts almost every Sunday, since 2011!

Today’s kiss is from my short story Chemistry, originally written for the charitable anthology Coming Together: With Pride but also available as a stand-alone ebook. Either way all sales benefit HIV charity AVERT. 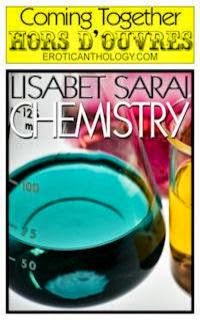 Kit is a workaholic, a brilliant pharmacological chemist who is driven to succeed. She wants a life that is controlled, disciplined, and predictable. When she meets Frank, her hairy ex-hippie neighbor, she's inexplicably and irresistibly attracted to him, though he represents everything that she despises. She tries to fight her own desire, but discovers that sometimes, chemistry trumps rationality.

This is one of my favorite stories, partly because there’s a bit of me in Kit, and quite a bit of my husband in Frank.

Once you’re done with my snog, head back to Victoria’s Blisse Kiss home page for more sexy Sunday kisses! 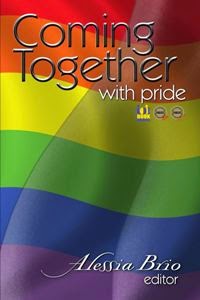 As she waited for her machine to boot, she took a deep breath and tried to focus her thoughts. She took a bite of her sandwich, savoring the smoky Jarlsberg and the crisp greens.

The curtains were open. She realized that he might, just might, be able to see into the room. A blush crept over her, starting with her cheeks to warm her earlobes, her nipples, her fingers and toes. What was she thinking of, sitting there nude? She glanced down at her naked body, and realized that she was still wearing Frank's chain around her waist. She unclasped it. It lay coiled in her hand, glittering seductively.

Oh dear, she would have to return it. But not in person. Definitely not. She could package it up and leave it on his doorstep. She could mail it to him. Even as Kit mulled over the various ways she could get the chain back to its rightful owner without further compromising herself, she was putting on a summer shift, earrings, sandals. She was still arguing with herself when she found herself on Frank's doorstep, the chain clutched in her fist.

She couldn't help it. She didn't understand. Frank opened the door wearing nothing but an Indonesian batik sarong and holding a half-full wine glass.

"Katerina! What a completely unexpected pleasure."

"But I gave it to you, princess. It's yours." His eyes narrowed and his smile widened. "You know that. You didn't need to come back here."

"Well, I wanted to, um, apologize for acting so ..." Normally the most articulate member of her team, Kit now found that she was unable to assemble a coherent sentence.

Before she knew it, Kit was sitting at the linoleum table in the kitchen at the back of the house, a full wine-glass in front of her. She couldn't seem to explain that she didn't drink. Frank raised his glass.

"To neighbors. To new friends." He sipped at the wine. A ruby drop hung in the thicket above his full lips. "To chemistry."

Then all at once he was kissing her, his mouth a bewildering array of flavors: wine, sweat, pot, and faintly, pussy. A wildfire of desire raced through her body. He thrust his tongue into her mouth and she met it halfway. His hands were all over her, snaking down her neckline to caress her tits, sliding up her hips under her dress, slipping between her damp thighs as he discovered she wore nothing underneath.

In less than ten seconds he had his fingers crammed in her cunt and she was humping them madly, moaning and twisting herself to force him deeper.

Posted by Lisabet Sarai at 6:54 AM