Two of My Hottest

The inspiration for this hot story was something not very "hot" at all. It was winter and cough medications were advertised on TV. One particular commercial caught my eye. A unattractive fellow coughed all day long, irritating his co-workers. Someone offered him a cough drop and poof!, he turned into a non-coughing hunk. A story popped/poofed! into my head. An ugly, bearded, beat up looking man rescues a beautiful woman from danger. Hint: he cleans up nicely. 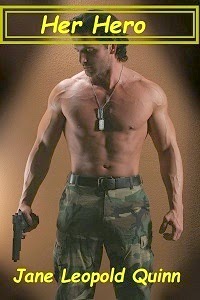 Here’s the blurb for Her Hero:

Rowdy Pierce -- warrior. Sara Stewart -- artist. Macho mercenary rescues posh jewelry designer. Their lives collide in an spectacular rescue and escape across the Egyptian desert. Sara falls for her sexy, body-to-die-for hero and makes the first move. Rowdy, fascinated by the luscious, sweet-bodied, free-spirited woman he saved, takes what Sara offers. He doesn’t expect to lose his heart. Will their lust turn to something deeper back in the real world?

“Where?” His voice was an embarrassing breathless, husky whisper.

“Thank you, Lord.” He swept her up—he loved doing that—charged through the doorway to her office, kicked the door shut, and dropped her down on the sofa. The little devil lay there beaming up at him with those blue eyes, not looking icy at all. Rowdy knelt beside the couch. “Take this off,” he ordered as he pulled her sweater and tank top all the way off over her head.

“Sonofabitch.” His breath caught in his throat. He was afraid his heart would stop.

Her falsely innocent question kicked it back in. “Like?” he gasped. Glancing at her pleased expression, he dragged his gaze back to her breathtaking breasts. His tiny feminine side appreciated that her bra was spectacular, the colors shimmering into each other, the lace barely covering her. But he could give a shit. The huge masculine side wanted to taste the soft, cushiony skin, preferably…now. He lowered his head and sucked her nipple between his teeth.

She responded with a sharp cry.

Right through the lace, he rocked it, lashing the tip with his tongue.

She twisted and surged, her fingers in his hair, gripping his head. “The other one,” she begged with little kitten-like mews.

He was a good boy; he did as he was told. With a final nip, he lifted his head and whispered, “The jeans.”

He slid them down her long, beautiful legs, right off over the sexy stilettos. “Fuck.” The panties matched her bra, blonde pussy hair peeping through the lace over her mound. “Jesus, sweetheart, you’re killin’ me,” he groaned. “Long legs, sexy underwear, and stilettos? I’ve died and gone to heaven.”

Sara groaned. Her chest rose and fell sharply. “I want you inside me now. Slow later,” she ordered, gripping the front of his shirt.

“Yes, ma’am.” He stood, divested himself of his shirt, boots, and jeans, and after peeling her out of her bra and panties, knelt between her thighs on the cushions. “Leave the shoes on,” he commanded. He didn’t give a crap if those spikes scratched his ass to ribbons.

“Rowdy, I want you…now.” She clutched his arms, pulling him toward her.

Shaking, you’d think it was his first time with a woman, Rowdy pushed her thighs out, rolling them open. God, she was pink and wet and ready, her clit swollen and red, her pussy soft, winking moistly at him. “Hoh…Jesus…” he intoned reverently. He wanted to ram his aching cock inside her little hole until she shrieked with pleasure.

She squirmed when he pressed his thumbs on either side of her clit. “This is so pretty, darlin’.”

Her Hero is available for sale here
http://amzn.com/B00TKXN6KO

Loving Valentine was the first short story I ever wrote. A critique group I was a member of had a challenge on Valentine's Day to write a snippet based around a red satin, heart shaped pillow. Some of the others wrote a scene like a couple floating in a canoe down a scenic river, the heroine's head resting on the satin pillow. I wrote what became the opening scene of Valentine's Day, as it was titled when first published in 2006.

She felt him slide her little red satin, heart shaped pillow under her. Yes. That was just perfect to hike her bottom up, level with his lips. He was so tall, and she wanted to do whatever necessary to aid him in his mission.

Their eyes locked on each other's, Rafe's mouth clamped around her clit, and she strained her long legs up and out, widening them to urge him in closer. Val clutched his hair and stood her tippy toes on end, pushing herself into his face. Her back arched as fireworks raced from nerve endings in her core, to her nipples, to her brain.

"Yes…there…that's it. Don't stop that," she pleaded, her voice rising into hysteria.

You can imagine the shock of some of the group's members. I don't think they expected something so raw. At first I was kind of embarrassed, but then I grew to be pretty proud of the imagery I'd created. The scene sat in limbo for a year or so. I sure didn't know what to do with it. Shortly after my first novel was accepted by Whiskey Creek Press Torrid, I had a chance to contribute to a series of shorts in Torrid Teasers. 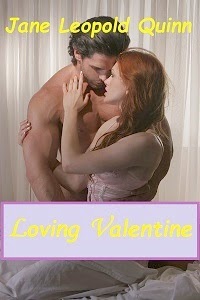 Here's the blurb of the expanded story.

Valentine, her brother Ryan and his best friend Rafe, ran wild when they were kids. Val's crush on Rafe started early and never died. Recovering from his divorce, Rafe reunites with Val at Ryan's wedding and is thoroughly turned on by the stunning woman she's become. Sparks fly, and their mutual fascination turns to lust. Val and Rafe's lifelong fantasies are fulfilled in one night of breathtaking sensuality. Can this ecstatic reunion turn to love?

One guess as to whether their reunion turns to love. I have now re-published this book, changed the title to Loving Valentine, and gave it a new cover.

Besides loving these two stories, I've discovered the pleasures of making my own covers. The Jimmy Thomas site romancenovelcovers.com has been a gold mine of possibilities for me. I've used pre-made covers from that site, and now I've begun buying stock images and adding my own title and author name. I've also used iStock.com and periodimages.com. My covers are simple, but I think pretty effective. Her Hero's cover is downright scorching hot. My eyeballs are smiling.

Sensual fantasies were locked in my mind for years until a friend said, "Why don't you write them down?" Why not, indeed? One spiral notebook, a pen and the unleashing of my imagination later, and here I am with more than a dozen books published. The craft of writing erotic romance has become my passion and my niche in life. I love every part of the creative process—developing characters, designing the plot, even drawing the layout of physical spaces from my stories.
My careers have been varied—third grade school teacher, bookkeeper, secretary—none of which gave me a bit of inspiration. But now I'm lucky enough to write romance full time—the best job in the universe! And I'm fortunate enough to have found my own happily ever after husband.

Ellora's Cave
Lost and Found
The Real Deal
Indie
Loving Valentine
His, Hers & His
The Keeper
Soldier, Come Home
Winning Violetta
A Promise at Dawn
Jake and Ivy
Wooing the Librarian
Home to Stay
The Long Road to You
Her Hero
Siren
I'll Be Your Last

Thanks so much for hosting these books, Lisabet!

Isn't it funny how our earliest work is often what's closest to our hearts?