Anything can be inspirational

“If I ever get married, it will be to a girl like her.”

That line appears in Little Rainbows and was plucked from real life. In fact, when I first thought about writing a book, that line was the only thing I had. Whatever my story would end up being about, I needed that line to be in it.

You see, when I was fifteen years old, somebody used those words while referring to me. He didn’t say them to my face, but they reached my ears anyway and I’ve never forgotten them.

Never mind that I wasn’t in love with the boy in question. Never mind that I haven’t seen him since that summer. When somebody likes or admires you enough to say something like that – especially when you’re not around to hear the compliment – it gives you the sort of confidence boost to last a lifetime.

Of course, in Little Rainbows the man who used the words and the woman he said them about, do meet again and are given a second opportunity to create something beautiful together. Their journey is riddled with obstacles though, so it is by no means certain that Jason will get his wish.

The second thing to inspire me was a geological phenomenon I encountered a few weeks before I started writing. Up until that moment I hadn’t known there were such things as blowholes. I’ll use Jason’s words to try and explain what a blowhole is:

“A blowhole is a deep opening in the ground a short distance away from the shore. There’s an underground connection between the sea and the hole where water gathers. Every so often the water erupts. It is a powerful sight when a huge column of water shoots straight up into the air, only to disappear again.”

Jason is right. It is a powerful and mesmerising sight. Once I’d seen the blowhole near Belmullet and the spouting water, I knew I had to set my book on the west coast of Ireland just so I could get that magical experience into my story. I can only hope my words do the beauty and magnitude of an erupting blowhole justice. 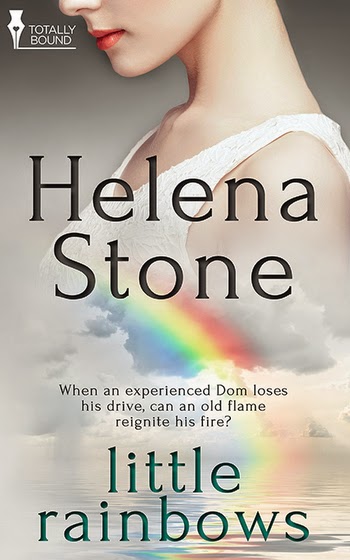 When Jason and Heather first meet they are young and sure they are wrong for each other. As a result they spend a summer admiring each other from a safe distance.

Twenty years later Heather is coming out of mourning, having lost her husband and Dom eighteen months earlier. Jason, now the owner of an exclusive sex resort on the west coast of Ireland, struggles with the loss of his desire to dominate.

Jason’s resort is about to celebrate its first anniversary and party planner Heather has been hired to create the perfect celebration. Their reunion comes as a big surprise to both of them.

There it was, her opportunity to kick-start her life again. And, as restarts went, it made quite an impression. The hotel or club—she wasn’t quite sure how to label the building—looked rather grand at the end of the long drive. The Atlantic Ocean, throwing up a spray in the distance, only enhanced the picture. Even on this bright summer’s day she could see small rainbows in the watery mist the waves were producing. It would be easy to confuse this place with any of the up-market tourist traps the west coast of Ireland was peppered with. This could be any other posh resort catering to Americans trying to find their roots and golfers looking for an opportunity to try the links courses littered along the coastline. The heavy gate blocking the entrance told a different story. She knew too much about this place, its purpose and what happened behind those gates to confuse it for anything except what it was, a dream from the past and—if everything went according to plan—the start of the rest of her life.

She’d been looking at the building, the grounds, the gate and the little buzzer on the intercom box for a few minutes. If anybody on the inside happened to be keeping an eye on the entrance through those security cameras, they would have decided she was either scared or crazy by now—and they’d be right. She was apprehensive. Her hands were clasped together, her fingers worrying her wedding ring. After eighteen months of virtually living like a hermit, coming here felt like diving in headfirst. Still, if she’d had any doubts about leaving Dublin, that surprise visitor two weeks ago and his shocking proposal had taken care of those.

The bastard. She refused to even think his name. It still bothered her he’d had the nerve to show up at her door like that. Where would he have gotten the idea she’d be open to his suggestions? It had been clear that he’d expected her to embrace his offer—or should she call it an order—with open arms. His delusions of grandeur must have gotten the better of him, or he’d confused her with someone she clearly wasn’t. She didn’t get it. Even before her self-inflicted confinement, she’d made a point of staying away from him. Why would he think she’d changed her mind about him just because she was on her own? She didn’t know but lingering on that memory right now didn’t serve any purpose. She didn’t want him in her thoughts, especially not now. It would only make her more nervous than she already was.

With a sigh she lifted her hand and pressed the little button. She’d come this far. She hadn’t driven the five hours from Dublin only to turn away at the last hurdle. If she gave up now, it would be the end of the business they’d built together. If she chickened out of this, there would be no way of ever going back on her own terms. Going forward scared the shit out of her but going back frightened her even more. She could do this. She’d promised she would take this step. Breaking her word was not an option, no matter how scared she was.

Helena Stone can’t remember a life before words and reading. After growing up in a household where no holiday or festivity was complete without at least one new book, it’s hardly surprising she now owns more books than shelf space while her Kindle is about to explode.

The urge to write came as a surprise. The realisation that people might enjoy her words was a shock to say the least. Now that the writing bug has well and truly taken hold, Helena can no longer imagine not sharing the characters in her head and heart with the rest of the world.

Having left the hustle and bustle of Amsterdam for the peace and quiet of the Irish Country side she divides her time between reading, writing, long and often wet walks with the dog, her part-time job in a library, a grown-up daughter and her ever loving and patient husband.

Helena Stone can be found in the following places:

Welcome to Beyond Romance, and huge congratulations on your new release. This sounds like a great story.

Congratulations on your first book. Welcome to the rollercoaster.
Alexa

Congrats, Helena I'd like to welcome you to Ireland as well as BR and "the rollercoaster".
ANYTHING is possible in Ireland: it was the inspiration (and the setting) for my first novel, and a few more which have followed directly from it

Thank you so much for allowing me to visit your blog, Lisabet. The post looks wonderful.

Thank you Alexa. A rollercoaster indeed and I haven't yet made up my mind whether it's more fun than scary or not :)

Thank you Paul, and I love your name. I don't think I mentioned the husband's name is actually Dermot, did I?
I've got a feeling Ireland will inspire me for several books to come. There's no end to the possibilities.

Thank you Aurelia, I'm so glad you liked my post.