Let me count the reasons I love cowboys. Sorry, I can’t count that high.

I’ve been in love with a gruff, man of few words, stubborn to the bone, dang sexy cowboy for a long time. My dad got me started on the old Westerns a long time ago and I still enjoy them. I like them so much that I’ve published forty-four stores involving cowboys.

My newest book from Decadent Publishing, For Ruby's Love, is the sequel to The CEO and the Cowboy. Both books obviously involve a cowboy. While writing them I got to indulge my fantasy of falling in love with a cowboy, driving him to the edge of his patience, and bringing him to his denim-covered knees. Although that really happened more in the newest book, in which I brought a woman into the mix of the two men who had begun a romantic relationship in The CEO and The Cowboy.

Actually, I treasure Western stuff so much that my office is decorated with it. I have a collection of miniature fancy boots, small covered wagons, a lighted stagecoach on an end table, the cutest cowgirl-dressed dachshund you’ve ever seen, numerous Western hanging ornaments that hang year-round on my walls, and two art quilts I’ve made. One has some of the covers from my cowboy books on it and the other is just Western-themed. 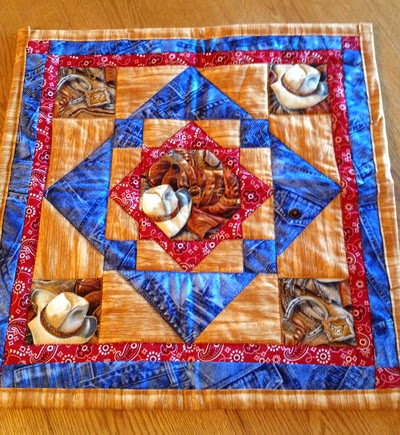 I also enjoy traveling to places that give me fresh ideas for future settings for upcoming Western contemporary romances. For example, last fall I visited Medora, North Dakota in the upper Badlands. I absolutely fell in love with the area and the town and the people and…. Okay, I’m starting a four-book series based on the area, Cowboys from the Badlands.

Because of my love for everything cowboy, I occasionally do some kind of informational post on my Starla Kaye blog. In case you’re interested, I’ve done the following posts:

Here are some of my favorite cowboy slang terms (old and current). See if you know any of them!
*Reference: Old Slang, Lingo & Phrases - http://www.legendsofamerica.com/we-slang.html

Acknowledge the Corn: To admit the truth.
A Lick and a Promise: To do a haphazard job.
Desert Canary: A burro.
Disremember: Choose to forget.
Hellabaloo: Riotous noise.
Honey-fuggled: To cheat.
Hopped for Mama: A horse bucking.
Rag Proper: Dress well.
Shop-mades: Boots.
Steel: Spurs.
Stretchin’ the Blanket: Telling a tall tale.
Suitcase Rancher: An absentee rancher.
Wearing the Bustle Wrong: Referring to a pregnant woman.

Although Calhoun Cordell, my cowboy in For Ruby's Love, didn’t actually use the term “disremember,” I believe he would have if he’d thought of it. He would have loved to forget all about the spirited, stubborn cowgirl that showed up at his ranch in place of the horse whisperer he’d expected. Ruby Tuesday McMurtry made him nuts from the first look at her on. 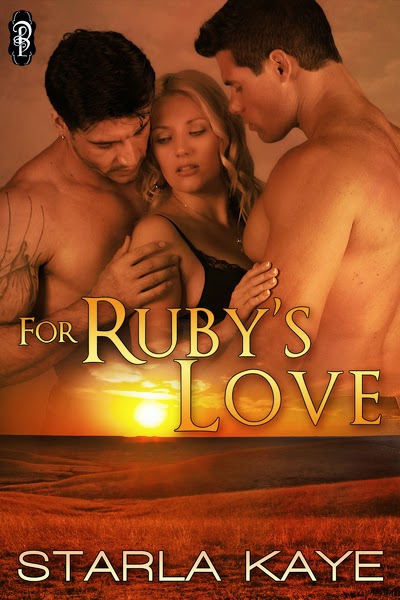 BLURB
Calhoun’s a simple cowboy with more problems in his life than he can handle at the moment. After nearly two years, he struggles to hang onto a relationship with Daniel, his first male lover. Daniel is worried about him because of the fire, his concern for his prized breeding mare, and because he is determined to buy the neighboring ranch to expand. But Daniel isn’t a businessman without goals of his own for expansion, a fact that frustrates Calhoun as well. He doesn’t want to lose Daniel, but will their differences finally be too much?

Daniel considers himself a lucky man to have met the rancher, someone almost his opposite and someone who he doesn’t want to live without. Standing beside the moody Calhoun has been difficult since the fire that burned down a horse barn, took the lives of two valuable horses, and traumatized a favored mare. Along with all of that, his harried friend is determined to expand his ranch holdings. Daniel is against the purchase and would prefer to find a way to slow the man down. Lately, he’s also begun worrying if maybe he isn’t enough to satisfy his lover’s needs.

Complicating everything even more, Ruby shows up later than expected at Calhoun’s ranch to honor a job as a horse therapist that her father had agreed to before his sudden death. She knows what happened to the mare and is certain she can help her, if given the chance. But the stubborn rancher can’t get past the idea of her being a woman, someone not strong enough to work with such a damaged horse. They butt heads over the matter until she finds an ally in Daniel. He is concerned and yet believes in her abilities. Another problem arises, though. She and Calhoun have been skirting around an unwanted attraction, and then she discovers another surprising interest between her and Daniel.

EXCERPT
He pulled open the over-sized front door and gaped at the bit of a woman shivering on the porch. She appeared a foot shorter than him and a good sixty or more pounds lighter. What hit him most were her eyes—an odd dark green, like jade or something. Her eyes narrowed as he looked her over.

Finally, she stretched to her full minimal height and bristled at him. “When you’re done checking me out, do you think you could let me inside? It’s colder than cold out here.”

Daniel stepped beside him and intervened. “Let the lady in, Cal.” He looked around her and asked, “Where’s your car? Assuming you drove here.”

She slid between them into the tiled foyer before turning back. “No car. And I didn’t drive here, at least not exactly.” Her teeth chattered.

Calhoun closed the door against the sharp winter breeze and watched her pull off a battered pink Stetson, unveiling chin-length strawberry-blonde hair. “What does ‘not exactly’ mean?” He added, “Who are you, anyway?”

She worried her trembling lower lip and glanced from him to Daniel and back. She pulled off a glove and stuck out her hand. “Ruby McMurtry.”

Instead of taking her hand, he puffed up in annoyance. “You’re late! Where’s your father?”

She started to lower her hand, glowering at him. But he noticed something besides anger in the depths of those enchanting eyes. He couldn’t get a handle on the emotion.

While he tried to calm down, wishing he hadn’t jumped on her, Daniel reached out and shook her very red-looking hand.

“You feel like ice,” he said in concern. He took a second to scowl at him.

As she blinked at her hand sandwiched between Daniel’s, her already pink-chilled cheeks turned pinker. “I should’ve worn my thicker gloves,” she muttered in clear discomfort. When she managed to slip free, she glared at him.

A twinge of guilt about his rude behavior passed through him, but his anger came out first as he repeated himself. “Where’s your father? I have a serious bone to pick with him.”

Those eyes that still captivated him welled up with tears. His gut tightened.

Her lower lip wobbled and she sputtered, “He…he…he’s dead.”

She enjoys writing about strong-willed, independent women who butt heads with equally determined, self-confident, and slightly domineering men. Her belief in relation to her heroes is to find them their perfect match, but make him really work for the happily-for-now or happily-ever-after with the woman who wins his heart. Of course, she likes her heroines to be challenged as well. Love isn't easy. 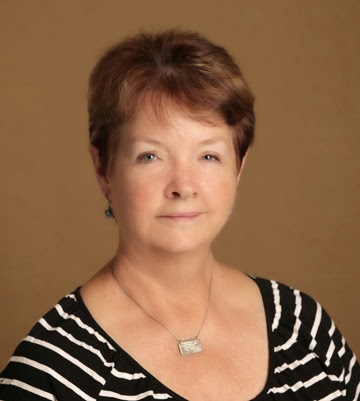 CONTEST: Prize of your choice of a small Western picture frame or a horse dish towel. Leave a comment about why you love cowboys or about some cowboy lingo you know. One random contestant will be chosen March 14.

Thanks for having me here and I look forward to any comments. Be sure to leave your email address for the contest.

Cowboys wear chaps and I love them wearing chaps.

Oh boy cowboys! Love how they look in jeans! ;) Some of the sayings are new to me... thanks for sharing! greenshamrock at cox dot net

Welcome to Beyond Romance! I have to admit, I've never felt any particular draw towards cowboys. I'm an East Coast city girl, I guess. I do appreciate what writers like you can do with the material, though.

I think cowboys remind me of the rough and tough old west. I wouldn't have wanted to live in those times. But it is fun to visit. You bring out the qualities of the old west to modern times.

Thanks for the compliment on my modern cowboys. I wouldn't have wanted to live back then either, but I enjoy visiting them in what I read or write.