Get the Stone Hard SEALs Duet NOW at a discounted price!

Last summer, Hot Alpha SEALs took the book world by storm, getting rave reviews for this collection of scorching military romances, and earning spots on the New York Times and USA Today bestseller lists.
Ryder’s story was such a hit, readers asked to read Drake’s story as well. Here, now, for the first time, are BOTH adventures!

The duet (a full length novel) will retail for $2.99, but I wanted to offer it at a discounted price during preorder for those of you who  have read Ryder’s story and have been waiting so patiently for Drake. This is a great deal as well for your friends who missed the Hot Alpha SEALs Collection and are new to this exciting read.

Don't forget to enter to win the Stone Hard SEAL Tiara below!
Tell your friends! 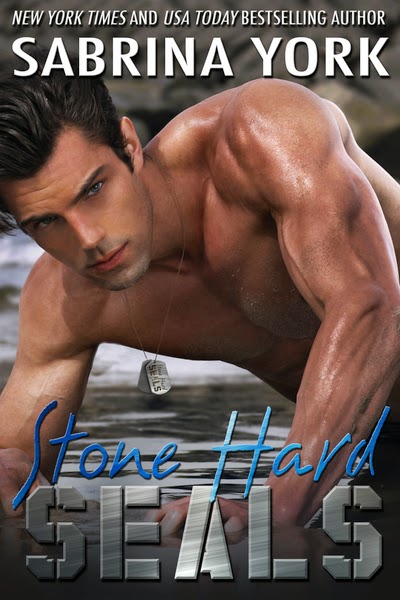 A hostage rescue mission turns Ryder “Stone” Maddox’s world on its ear when he comes face-to-face with his greatest fear: A woman he cannot resist. But he has to resist Lily Wilson. He’s vowed never to fall in love. Besides, as the daughter of a senator, she is definitely off-limits. Lily sees things differently. Irresistibly drawn to this hot, hard SEAL, she is determined to prove they belong together…and that her man does not have a heart of stone.  (Originally published in the NYT and USA Today Bestselling Hot Alpha SEALs collection)

Drake Ronan is all man—a rock hard SEAL who doesn’t need help from anyone. Doesn’t need anyone. But when he’s shot during a dangerous rescue mission, and has to rely on a beautiful nurse to survive, he realizes he has to rethink his resolution. Suddenly he can’t imagine his life without Brandy in it. It’s a damn shame she has a secret that could ruin everything.

“Are you hungry?” He asked because her belly growled loudly enough to attract pirates on the mainland.

“A little.” She licked her lips. “But I’m really thirsty.”

He pulled out the straw of his CamelBak and leaned forward, holding it to her lips. He should have shuttled off all his gear and just handed the damn thing to her because when she leaned in close and he got a whiff of her, he nearly passed out. You would think a woman who had been held prisoner by filthy pirates for nearly a week would smell bad. She did not. She smelled like heaven. There was a light musky odor of sweat—it was hot in the tropics—but it twined with something that was essentially female.

He’d never felt such hunger. It screamed through his soul.

And, on top of that, their faces were close. And she was sucking on the nozzle. And fuck. He was a warrior. A trained weapon. On a mission.

This was no time for a hard on.

But he was hard. Damn hard.

Her lashes flickered as she glanced up at him; she moaned as she swallowed. A shiver walked down his spine. Walked right down his spine and coiled in his balls.

When she sat back with a sigh, he put the nozzle to his lips as well. Not because he was particularly thirsty, but because he wanted a taste of her mouth, while it was still fresh.

What he really wanted was to kiss her. But she was the senator’s daughter and he was a grunt. That wasn’t going to happen. It couldn’t.

“Did…did you say something about food?” Damn lashes. Fluttering again. He had the urge to grab his Gerber and snip them off.

He pulled an MRE from a pocket on his left leg, read the label, and grimaced. He hated the meatloaf. He should have paid more attention when he prepped his gear. He had more in his pack, but this would do for now. “I have this.”

Her nose wrinkled as she studied the silver foil.

Yeah. Wait ’til she got a taste. He ripped open the packet, broke off a piece, and handed it to her. It was messy, because of the gravy, but he didn’t want to unload everything to find an implement. They needed to eat and go.

She took a bite. Her eyes widened. “Yuuum,” she said in an unconvincing tone.

It was all he could do to hold back his laugh.

“What…” She swallowed heavily. “What is this?”

“What does that stand for?”

Her brow wrinkled, and then she laughed.

And ah, what a laugh. A melodic trill. Some kind of sound he figured you might hear in heaven.

“Do you eat these often?”

“Not if I can help it.” He shoved a chunk in his mouth and fired it back. “But we have a long way to go today, and these have a lot of calories.”

She froze, a niblette of mystery meat halfway to her mouth. “How-how many calories?”

“About twelve hundred a meal.”

She gaped at him. “Twelve hundred?” She glared at the meatloaf as though it were made of turds. Then again, it might have been. “And you gave it to me? To eat?”

“Why didn’t you warn me?” She smacked him. It was like being batted by a kitten. “Twelve hundred calories is my whole day!”

He grinned. He could burn that much with a good fart. “Perfect. It’s probably all you’ll get. Eat up.”

“For twelve hundred calories, I could have eaten a cheesecake.”

He looked around for the cheesecake.

She shoved her tiny chunk of meatloaf at him. “Here, you eat it.”

He pushed it back. “You eat it. We have a lot of ground to cover today.”

“There’s an island to the south.” He grabbed a stick and sketched out a quick map. “We’re here. At the north end of this island. And the secondary extraction point is here.”

Her throat worked. “How will we get to the other island?”

“Oh, I wanted to.” She sighed. “My mother was afraid I would drown.”

“Not drowning is kind of the point of swimming.”

“She wanted to keep me safe.” He didn’t miss the exasperation in her tone. “I didn’t get to do a lot of things. Which is probably why— And wouldn’t you know it? The first time?” She gazed at him as though she’d finished a sentence. As though he’d understood a bit of what she’d said.

“Well, don’t worry. We’ll get you home safe. And then everything will be just the way it was before.”

Her sudden frown mystified him.

Her Royal Hotness, Sabrina York, is the New York Times and USA Today Bestselling author of hot, humorous stories for smart and sexy readers. Her titles range from sweet & snarky to scorching romance.  Connect with her on twitter @sabrina_york, on Facebook or on Pintrest. Check out Sabrina’s books and read an excerpt on Amazon or wherever e-books are sold. Visit her webpage at www.sabrinayork.com to check out her books, excerpts and contests. Free Teaser Book: http://sabrinayork.com/home-2/sabrina-yorks-teaser-book/ And don’t forget to enter to win the royal tiara!

Lisabet, THANK YOU FOR SHARING!!!!