Out Today! The Eyes of Bast (comment and win!) 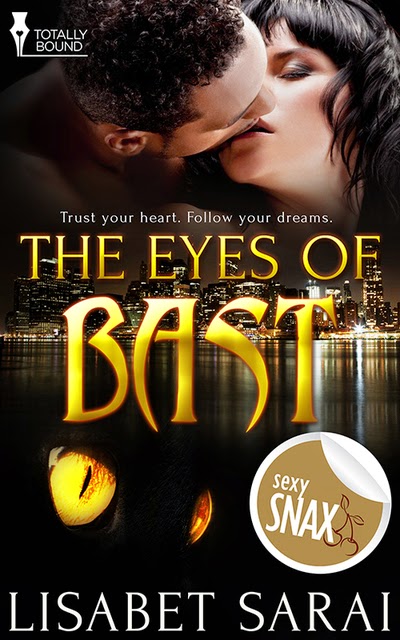 Shaina Williams' grandmother bequeathed her that wisdom, along with a old pendant from the Islands, carved from an ocelot's tooth. When instinct tells Shaina to visit the feral cat trap she'd set in Central Park, she listens to that inner voice, She discovers she's caged a magnificent black tom, but the cat inexplicably vanishes after she tends to his wounds. Seeking the errant feline, Shaina encounters instead a handsome stranger whose slightest touch sets her body on fire. As the day dawns after a night of ferocious passion, her mysterious lover is forced back into his true shape - the tomcat she'd rescued.

Born a cat, Tom was transformed into an unwilling shape shifter by a sorceress who craved a human plaything to satisfy her perverse lusts. Centuries old and irresistibly powerful, Delphine Montserrat will stop at nothing to find her runaway familiar. Shaina vows to do whatever is necessary to defeat the vicious but seductive witch and save the man she believes is her soul mate – even though it might mean losing him forever.

I’ve got an excerpt for you below. Leave a comment telling me what you think and I’ll enter you into a drawing for a free copy! Don’t forget to include your email address so I can find you.

Tom finally broke the kiss and leaned back with a sigh. “Ah, Shaina! I should never have allowed you near me. But I was so very lonely... I wasn’t thinking straight. Now I’ve put you in danger too.”

“Danger? What kind of danger?” I reached over to flick the switch on my reading lamp, so I could read his expressions. Then I seated myself cross-legged at his feet and clasped his hands in mine. “Tell me, Tom. Tell me everything.”

“You will not believe me.”

“How could I not believe after – after what I saw this morning?”

His brows knotted together. “I never wanted you to see – I was careless...”

“But I did see. And now I know, at least something about you. But I don’t know enough to help you out of whatever trouble you’re in. Tell me the whole truth. I promise I’ll keep it private, if that’s what you want. And I promise I won’t be shocked.”

Tom’s lush mouth twisted in a grimace of disgust. “You might not be able to keep that promise. But never mind. You’ve asked. I’ll tell you.”

He stared off into the distance, above my head. “I was born in a small town in coastal Maine, about seven years ago.”

I choked down my cry of surprise. How could it be...?

“Yes. I was born under a wharf. I spent the first six months of my life as a black kitten, a stray living off the scraps from the fishing boats and clam shacks. Then she caught me and made me her prisoner.”

“I don’t even want to utter her name. There’s danger in the very word. She is a witch, centuries old, a practitioner of the darkest arts – the epitome of evil. Out walking one evening along the rocky shore, she caught sight of me and wanted me as her familiar. It was easy for her to lure me into her clutches.

“At first she just used me to facilitate her spells. The rumored powers of black cats are more than just legend. Before long, though, she began to experiment.”

His ominous tone sent a chill through my naked body. I pulled the towel around me.

“You see, her advanced age hadn’t diminished her lust. Quite the opposite. She wanted a sexual plaything, someone she could use to satisfy her perverted desires. A male body she could own and control. So she delved into her books of magic, seeking a spell that would turn her poor innocent feline familiar into a man – at least when she wanted him that way.

“Her first attempts failed.” Tom shuddered at the recollection. “She barely managed to save my life. I guess she’d grown fond of me at that point – in her own twisted way.”

“Finally, she found a ritual that would change an animal into a human during the hours when the sun was banished from the earth. I’ll never forget the terror of that first transformation, when I found myself wobbling on two legs in front of her naked body. It was even worse than what came after.”

“Oh, Shaina – I was human, but scarcely a man. I was barely thirteen.”

Get your copy of The Eyes of Bast today!

And don’t forget to enter the contest!

Posted by Lisabet Sarai at 9:04 AM

i love it! allypmorrell at gmail dot com

Wow, I love Tom. My heart goes out to the poor confused kitten/child who is scarred not only psychologically but physically. I hope Shaina can help Tom defeat the holds the witch has on him. I can't wait to read more.
Thank you for the wonderful contest.
orelukjp0 at gmail dot com

Hi Lisabet, Charmaine here and -yes, I am 84, "It's not over 'til it's over," my friend.Your hot hot story of shape shifters and love sounds wonderful. Do you really think your readers would be interested in my writing about some mature love, humor, sexuality and HEA? If so, I'd love to be your guest. Best success on your latest book. Your imagination boggles my mind.

Loved the excerpt and want to read more....

Thanks! Help me spread the word, Ally!

Thanks for coming by!

So nice of you to come by and comment.

Yes, I think my readers would love to hear from you. A lot of us are way older than the typical romance heroine.

It's been a long time since I've heard from you. Thanks for dropping by.

I thought I should post something that wasn't a sex scene for a change....

Thanks very much, Michelle. Good luck!

Thanks so much, Shannon.

Happy release day! This sounds very intriguing ;) thanks for sharing the excerpt!
efender1(at)gmail

I would love to read more of this one. Adding to my list.
debby236 at gmail dot com

thanks for the chance at a great prize!

Still think Necessary Madness is one of the best books I have ever read....everything about it jumps out at the reader....the romance, the mystery, the paranormal element....everything! *sigh* now I feel a re-read coming on. LOL!

hugs from your fan,
jo
johannasnodgrass(at)yahoo(dot)com

I've no idea whether or not the give-away is still open but wanted to let you know that both the blurb and the excerpt sound fantastic. Good luck with the release.

Thanks for taking time to read it, Erin!

I wish the rest of the world agreed with you. ;^)

Yes, the contest is open all week - until next Friday. Good luck!

And thanks to you all.

BTW in case you didn't notice, I have another giveaway going on at my blog today (Sunday the 5th)