Sneak Peek: A Promise at Dawn by Jane Leopold Quinn 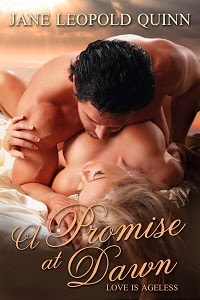 Their affair was scorchingly sensual

Faye Burke, recently widowed, retreated to the coast of Maine to grieve and reassess her future. Her favorite part of the day is watching the sun rise out of the Atlantic Ocean. It’s also when the man she considers her guilty pleasure runs along the beach.

Gil Farrelly, a successful painter, is trying to get his career back on track after the studio fire that destroyed everything. He starts his creative juices flowing every day by running on the beach. The lovely woman who watches him also gets his juices flowing and he’s determined to reinvent his career by painting her.

Faye’s combination of maturity and sensual vulnerability intrigue Gil and he wants to immortalize her on his canvas. She’s flattered, aroused and ultimately frightened of the emotions he incites. He claims not to care he’s younger by twelve years but she believes sooner or later he’ll come to his senses and seek out women his own age. Can Faye conquer her fears? Can Gil prove to her it’s not age separating them but her fear?

“Was your studio here in this area?”

“Uh huh. Like you, I came up here a couple years ago to find myself. Since the fire, I’ve been doing some landscapes. You’re the first portrait I’ve wanted to do in a long time.”

She lay on her back, tilting her face to the sun, savoring the warmth. She’d popped a slice of apple in her mouth, and he watched her chew and swallow it. “Faye,” he began, shifting his body over hers.

She sighed and opened her eyes.

He didn’t waste any time. Through eyes barely open, he watched her lashes close, watched her lips part. He kissed her softly. With light touches and delicate sips, he tasted the sweet stickiness of the apple on her lips.

He braced his hands on either side of her shoulders, holding himself off her breasts so the only place their bodies met was their lips. It took all his control to go slowly.

At first she didn’t touch him. Then at the same time she began to kiss him back, she placed her palms on his chest, their warmth and pressure highly arousing. She slid her arms around him and slowly pulled him down on top of her.

He took that for permission and rolled to his back, taking her, draping her over his body. He wrapped his arms around her, one hand cupping her head lightly, giving her the opportunity to break away if she didn’t like it. She stayed, and he deepened his kiss. His tongue explored her mouth, claiming her, delving into her welcoming and passionate response.

Her moans rose sweetly from her throat, then became deep growling noises. Her hands cupped his face, held him. She massaged his tongue with hers. His cock surged in response.

He rolled again putting her beneath him and slid his thigh between hers.

Her body quivered, her hips undulated, pressing upward against his.

“Gil,” she gasped his name. There was no question in it, just pure desire.

Slipping his hands under her shoulders, he pulled her up, brought his mouth down, and latched onto a beautiful strawberry shaded nipple as erect and hard as a little clit.

He uttered a soft grunt at her sharp cry, drawing on her, loving the taste and feel of the tightly furled bud.

She clawed at his shoulders, writhing under him. “Yes, yes, God, yes.”

He delicately clamped her nipple between his teeth.

He rocked the tip and lashed it with his tongue.

“Oh. The other one,” she begged with a breaking sob. She fisted her fingers in his T-shirt, yanking, tugging at it.

He released her nipple and pushed himself up.

He gripped the back of his T-shirt and pulled it off over his head, tossing it aside. “I want to feel your skin on mine,” he murmured, and teased her other nipple.

She gave herself so completely over to the torment of his mouth. He could feel her fingernails on his shoulders. The harder she scored, the deeper he drew on her nipple. They fed off each other, off the ecstatic storm of their emotions. She cried his name, rolled her head back and forth on the blanket, stiffened, and covered her mouth with the back of her hand. He felt her orgasm in the vibration of the guttural groan from deep in her belly.

His heart soared, his lips tipped in an elated smile. Just giving her this pleasure satisfied him more than he thought possible. She was an amazing combination of reluctance and responsiveness. She thought her age might make her less attractive? Ha!

A Promise at Dawn is available at Amazon

"Good short story! Faye and Gil have very hot chemistry, and their story is heartwarming. I was surprised at the character development in such a short offering. Faye had suffered such a huge loss, and we were drawn in along on her new path in life."

"Ms Quinn paints a detailed portrait of a woman re-awakening after the loss of her husband. Her emotional state is handled quite deftly. This story has pathos, passion and humor woven together. Gil and Faye's story unfolds quickly and it's a scorcher."

Sensual fantasies were locked in my mind for years until a friend said, "Why don't you write them down?" Why not, indeed? One spiral notebook, a pen and the unleashing of my imagination later, and here I am with more than a dozen books published. The craft of writing erotic romance has become my passion and my niche in life. I love every part of the creative process — developing characters, designing the plot, even drawing the layout of physical spaces from my stories. My careers have been varied — third grade school teacher, bookkeeper, secretary — none of which gave me a bit of inspiration. But now I'm lucky enough to write romance full time — the best job in the universe!

Welcome to Beyond Romance. This is a delicious excerpt. You've really captured the breathlessness of desire.

Thanks, Lisabet, and thank you for hosting me here today! I loved writing this book about an older woman's growing trust in the younger artist's feelings for her.