Describing actions is relatively straightforward — who touches whom, how and where. Actions, however, are not enough to create a moving and arousing sex scene. Somehow you have to put your readers inside the heads of your characters. Sex scenes just don’t work unless your readers share your characters’ experience.

What does it feel like, to be aroused? Warm,wet, full, throbbing, aching — we’ve all used these words a thousand times. Yet they’re only the roughest approximation to the way it really feels. Concrete terms only get you part of the way to the goal. Even if you succeed in precisely describing sensations (a difficult task), that’s not sufficient. In fact, the purely physical parts of sex can seem ludicrous, even gross, if that’s your sole focus.

To effectively describe sexual encounters, I find that I need to emphasize emotion, while suggesting sensation. To do this, I tend to use a lot of metaphor, that is, implicit comparisons, often to phenomena in nature. Hurricanes. Earthquakes. Fire. Clouds. Rivers and oceans. These familiar phenomena evoke emotional responses. By using them to describe sex, those emotions get transferred to the characters and the scene. At the same time, because they do relate to physical experience, metaphors can also convey ideas about how things feel, from a physical perspective.

Romance has gotten a bad rap for “purple prose”, overblown, exaggerated language that sounds ridiculous. An orgasm like a hurricane? Come on now! I read a blog post not too long ago where the author ridiculed the many outrageous descriptions of orgasms that she had encountered in her reading. I cringed at some of her extreme examples.

There are dangers here, I admit, not only overwriting, but also falling into clichés. Nevertheless, I don’t think I could write sex scenes without using metaphor. The human mind operates by recognizing familiar patterns and then filling in the blanks. That’s how metaphors work. They’re a kind of emotional shorthand. When I write that a climax is a hurricane (if I do it skillfully), my readers think: ferocious wind, drenching rain, overwhelming power, uncontrolled fury, terror, excitement, helplessness. All these connotations overlay the literal meaning of the text, giving it depth and intensity.

At least, that’s my objective! Here’s a brief excerpt from my paranormal romance Serpent’s Kiss. It demonstrates my point, I think. I use lots of metaphors, but I never actually come out and say, her climax was like a volcano. I hope that it works, that it conveys the intense pleasure my character is experiencing. 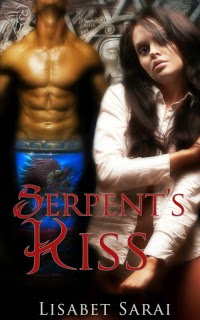 “You don’t understand what you ask. If we couple, you and I, we will open the gates of chaos.” He hovered close, leaning over her, gazing into her eyes. His scent made her dizzy.

His strong arms snaked around her body and pulled her to his chest. “So be it,” he whispered. “As the gods will.”

His mouth captured hers. He sucked away her breath, drained her of her strength. Then he swept his tongue across hers and everything flowed back: strength, breath, awareness, pleasure. She felt his tongue everywhere, on her aching nipples and in the liquid gap between her thighs, tickling the tender lobe of her ear, dancing in the hollow at the base of her throat. Yet she knew, with the tiny kernel of rationality that remained, that his lips had not left hers. This exquisite ballet of sensation was nothing more than an illusion.

Real or imagined, the fluttering tongues quickly carried her to the edge of release. “Please,” she begged, sliding her mouth away from his. “I can’t wait. Make love to me.” He clutched her to him. His erection pressed into her belly like a lump of stone. “You want me, Jorge. Take me.”

“Your clothes…” he murmured. In ten seconds she had them off, her jeans still hanging off one ankle, her blouse a torn heap on the ground. He pulled his shirt over his head and folded it into a pillow for her comfort. Then he bore down on her, taking them both the floor of the porch.

She untied his drawstring pants and pushed them down around his lean hips. His swollen cock sprang out, an invincible spear of flesh aimed at the sky. She stroked her hand down his length, marvelling at the satiny texture of the skin, the way it sheathed a core of granite. She was suddenly reminded of the feather, simultaneously stiff and soft.

Jorge swept his fingers once through her cleft, as if to assure himself that she was ready. She jumped at his shocking touch, teetering on the precipice. A river of sweet moisture flowed from her, coating his hand. He did not make her wait any longer.

With one jerk of his hips, he sank his rod into her juicy depths. Elena felt the silk-encased stone of his cock, sliding over her slick flesh, filling her, claiming her. The delicious invasion finally pushed her over the edge. Her climax erupted, starting at her molten core and overflowing, sweeping away everything in its path. She wailed, her voice shocking the birds and other night creatures into silence.