[Like science fiction? Today I'm offering a sneak peek at Christopher A. Gray's new novel, Dark Nights. This post is part of his blog tour to promote the book. You could win a $50 bookstore gift certificate! ~ Lisabet] 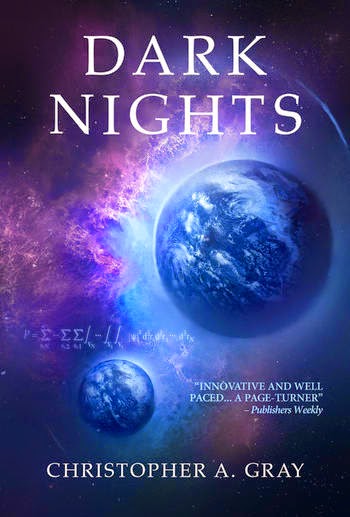 The machine believed it knew best how to save humanity... even if doing so meant destroying half the population.

Astrophysicist Doug Lockwood's unusual discovery during his observation of the sun kicks off a chain of events that nobody could have foreseen. The powerful political and military influences that compete to deal with his discovery set Lockwood on a course which will carry him across worlds, and into the grasp of a formidable new intelligence bent on accomplishing its goal at any cost. With Earth itself at stake and time running out, Lockwood and his team must find a way to counter this unprecedented threat before the powerful new enemy completes its plan. Two civilizations are pitted against each other in a desperate struggle for survival.

“I already tried that, it makes no difference!” Anders replied, a trace of panic in his voice.

Nick turned to the astrophysicist that was monitoring the moon’s position.

“What will the orbit be if no action is taken?”

The astrophysicist looked at him, incredulous.

“I don’t need to tell you what the outcome will be.”

“Is there at least a chance it will settle into a stable orbit? The speed is right.”

“The angle is off by three degrees! If it isn’t corrected the moon will pass within seventy thousand kilometers of the Earth. That’s less than one-fifth of its normal distance!”

Nick stared blankly at his expert, not wishing to believe what he was being told. The astrophysicist shook his head.

“With the increased gravitational and tidal effect, there will be a massive world-wide earthquake, and that’s just the beginning. The orbit will be highly elliptical, and will degrade further. We’ll have bi-weekly earthquakes and tsunamis, much worse than we have ever experienced. There is an 80% chance that within four months the moon will collide with us!”

“We’ll all be dead long before the collision,” said Anders, his voice shaking. “We may not even survive when the moon makes its first pass, six days from now.”

Another assistant looked over at Nick.

“We’re getting the same report from our observatory in Arizona. They’ve noticed the angle and are asking questions. How do you want me to reply?”

Nick broke out into a cold sweat. He didn’t know what to do. 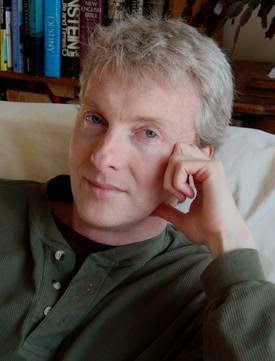 Christopher A. Gray is a professional freelance writer living in Toronto. He has been a sales agent, project manager, actor, filmmaker, comedy writer and performer, and world traveler.

Get your own copy of Dark Nights:

Use the Rafflecopter widget below to enter the Dark Nights drawing!

Follow the tour and increase your chances of winning!

Thanks for hosting Lisabet! I'll check in throughout the day to answer any questions from readers.
Christopher

The story sounds very intriguing. I can't wait to read it.

Thanks for the sneak peak ;)