With all the excitement about my latest shape shifter novella The Eyes of Bast, you might have forgotten my other shifter book - novel length - entitled Serpent's Kiss. Like my feline shifter book, this isn't your run-of-the-mill werewolf tale. The hero is a snake-shifter, a reincarnation of the Mayan god Quetzlcoatl, the Feathered Serpent.

From the first, Dr. Elena Navarro senses that the wounded man she discovers outside the gates of her rural clinic is not an ordinary mortal. With his chest ripped open, Jorge Pélikal still demonstrates unnatural strength and power. Elena is irresistibly attracted to Jorge, although he warns her their coupling could open the gates of chaos. She and Jorge fall in love, despite his dire predictions. Gradually Elena comes to understand that Jorge is a supernatural player in a cosmic drama that will determine the fate of the earth and of mankind - and that even if he triumphs in his apocalyptic struggle with his nemesis, she may lose him forever.

Sound intriguing? Leave a comment on this post (with your email address, please) and you could win a copy!

Meanwhile, enjoy my snog - defined as any amorous oral activity, remember! After you've commented, click on over to Victoria's joint for more weekend kisses. 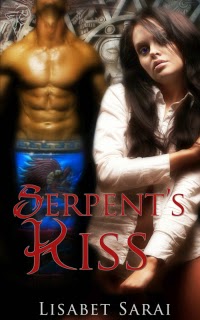 Elena opened her eyes to find sunlight streaming in from the back garden, and her flawlessly handsome new lover asleep by her side.

Another dream! Perhaps less threatening than the last, but equally vivid and strange. What was going on?

The echoes of her climax still shimmered through Elena’s body. She slipped a forefinger between her lower lips. Her folds were swollen and slick, with fresh moisture, not the sticky remnants of last night’s passion.

She turned to admire Jorge. He lay on his back, arms flung up above his head. His face was relaxed in sleep, those lush eyelashes motionless against his regal cheekbones. His cocoa-coloured skin stretched warm and elastic over his muscled limbs and torso. Her fingers ached to trace a path along the ridges and valleys of his chest and belly.

He was nearly hairless, save for the dark tufts in his armpits and groin. Elena brought her face close to the curly thicket under his nearer arm and breathed in his rich male scent. Salt and musk were dominant. Beneath them was the faint hint of vanilla.

She moved down to the other area of fur, where his quiescent cock nestled like a bird in its nest. Burying her nose in the wiry hair, she inhaled the warm aroma of their mingled fluids—bitterness and brine. Her nipples peaked automatically in response. She strummed a thumb across one of them and felt the vibrations migrate to her clit.

Saliva pooled in Elena’s mouth. She had to taste him. Delicately, determined not to wake him, she ran her tongue along the lengthening shaft. She could feel the blood coursing into his flesh. With each instant, he became thicker and harder. His cock writhed under her tongue like a separate living thing.

She lapped at him again, more strongly this time, from the root to the taut bulb. The rosy knob drew her. She swirled her tongue around the head, gathering a drop of fluid that eased out of the little eye. She flicked at the sensitive ridge on the underside. He moaned. Her pussy convulsed in sympathy.

Elena couldn’t stand to play any more. She opened her mouth as wide as she could and engulfed his swollen organ. Grabbing the back of his meaty thighs for leverage, she worked her way up and down the stony length of his glorious cock. Meanwhile, she sucked for all she was worth. She didn’t think about what she was doing; she didn’t try for art or technique. All she knew was that she was hungry, and that sucking on Jorge’s cock was the only thing that would satisfy her.

Great way to wake up in the morning! Thanks for sharing.

Enjoyed the excerpt! Thanks!

How interesting a snake shifter and a Mayan one at that. It sounds like a good story one I wouldn't mind reading. Thanks for the contests. Hope you have a great summer and a long writing career.

Thanks for taking the time to read and participate, everyone. I've drawn a winner - congratulations, Erin!

I'll be doing another giveaway on Wednesday the 16th at Aurelia Evans' blog. Stay tuned!