The powerful magnetism draws them together is an example of “magical lust”. It's irrational, irresistible, overwhelming. Pre-ordained, in some sense, by genetics or by destiny. In a realistic, contemporary romance this sort of attraction will raise eyebrows. Sure, there's chemistry, and love at first sight, but in the real world there are limits to how readily a couple will act on that sort of impulse. In paranormal erotic romance, though, readers are willing to suspend their disbelief. In a paranormal tale, there are all sorts of reasons why two characters simply cannot keep their hands off one another. Their fates may have become entwined over past lives. They may be enchanted. They may be destined to mate due to quirks of biology or the magic that sustains the shape shifter pack. They may have been chosen for one another by some controlling power.

Whatever determines their carnal connection, it's impossible to ignore or repudiate. In some paranormal books, the fated lovers represent different factions in a cosmic struggle (a sort of paranormal Romeo and Juliet), but that doesn't matter. No one and nothing can keep them apart. No other love can satisfy them. Sex that's driven by magical lust is more than just scratching an itch. It's literally a supernatural experience.

It's great fun writing scenes driven by magical lust. One can give in to fantasy, and yes, to hyperbole, without turning readers off. In The Eyes of Bast, I'm not specific about what binds Shaina and Tom, but it's clearly beyond the realm of the explicable. It's related somehow to their animal natures, to the generative power of the earth. I don't really have to lay out all the details. Anyone who has read any paranormal romance will recognize their attraction.

Here's a snippet from the book – the first time Tom and Shaina touch. 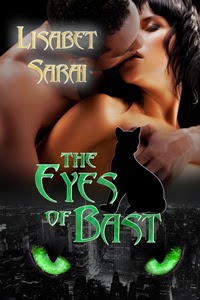 “Hello.” The voice was male, low and throaty. I jumped and whirled around.

A man stood behind me, a fairly young man with sleek, dark skin and a wide, shy smile. Although his body appeared to be fit and muscular, he held himself in an awkward manner, as if he had some subtle handicap. His arms hung at his sides, his hands clenching and unclenching as though he didn’t quite know what to do with them.

I gripped my mace more tightly, although he didn’t appear at all threatening.

“Nothing, nothing...” He shrugged and scratched the curly black locks that covered his head. “I heard your voice. I wanted to make sure you were all right.”

Had I spoken aloud? I returned his smile, still uncertain whether I should trust him. “I’m fine. Just taking a walk.”

“It’s not safe here after dark, you know.”

His earnest tone made me chuckle. I held up the can of mace. “I can take care of myself.”

Worry furrowed his high forehead. “That won’t help against some of the things that come out at night.”

A chill shot through me. I shook it away. “I was just headed home anyway.”

“Good. You should be careful.” His smile returned, melting my last vestiges of suspicion. He pronounced his English with a precision that made me wonder if he spoke something else as his native language. It wasn’t exactly an accent, but I could tell he wasn’t a native New Yorker.

“Oh – I know my way around here,” he answered. He ran his fingers through his curls and arched his back a bit, as though stretching. Despite that odd awkwardness, he was lithe and graceful. A brief pang of desire shot through me. “And I have excellent night vision. Exceptionally sharp hearing, too.”

I couldn’t figure out why, but something about him felt familiar. “Have we met before?” I asked, then cringed, realizing it sounded like a pick up line. “I mean – um – I don’t mean…” Hot blood climbed into my cheeks, though the shadows were probably too dense for him detect my discomfort.

His bold laugh rang out in the growing darkness. “Maybe we have met,” he said. “I live in the neighborhood. Do you?”

“Pretty close,” I answered, alarm bells sounding in my head. No matter how handsome and charming he was, I wasn’t about to give him my address.

“Well, then, you never know. You said you were heading home. May I walk with you?” He took my arm without waiting for my permission.

“Um – actually—” His touch stopped me cold. It drove out rational thought. As if someone had turned on a faucet, hormones poured into my blood. My nipples tensed and my lower lips grew plump and slick. His fingers on my bare forearm were tipped with fire. I gasped, staring up in wonder at his strong, even features, overcome by his imminent maleness.

I wanted stretch out in the grass and pull him down on top of me. I was dying to feel his weight on my chest, his hardness probing between my thighs. Skin on skin was what I craved, with an urgency I’d never experienced in my all my twenty-eight years.

His nostrils flared and I knew he’d caught the ocean scent rising from my sex. I could smell it myself. My saturated panties and jeans were no barrier. He grinned, revealing teeth so white they gleamed in the twilight gloom. I shuddered with need, imagining those teeth tearing my flesh, and stumbled on the gravel path.

“Are you all right?” he asked. He released his grasp to search my face, concern evident in his eyes. The blaze raging through my body subsided slightly.

“Ah – I think so. I’m dizzy...” I wasn’t lying. The world swung around us, tree canopies whirling overhead. Gradually, the universe settled back into place. My heart rate fell to something close to normal. My nipples still ached for contact, though. My clit pulsed, the seam of my jeans kindling sparks every time I moved. “I’ve – I’ve got to go.”

I started down the path, forcing myself to move away from him and his perilous magnetism. It might have been the most difficult thing I’d ever done.

See what I mean?

There's a lot of this in the book, because it was clear to me from the start that Tom and Shaina were bound by the fierce ties of magical lust. All I had to do was allow them to act on their desires. In fact, I doubt I could have stopped them – even if I'd wanted to!

I am such a fan of magical lust, it's not even funny. Being pushed into intense pleasure you could never achieve on your own? Enjoying things you never thought you'd ever enjoy? Yes, please.

Yeah, me too! It's particularly fun when the victims try to fight it.