The hero and heroine of my newest release, Valentine Next Door, explore the world in very different ways. Jeremy is a nature photographer. He travels to exotic locations taking pictures of their native sites. From a mama tiger and her cubs in wilds of India to a sunset over the Sahara, he explores the world and brings it back to everyone through his photographs. Miranda, on the other hand, explores the world through books and stories. She’s the school librarian, and lives by the old adage, that every book opens a new adventure.

Personally I resemble Miranda’s version of exploration much more than Jeremy’s. I’ve had some of my own adventures. I’ve traveled to some great places, changed careers and even lived in several dramatically different places. But I’ve still traveled to a million more places—some that don’t even exist—through books. And I also get to explore the world from an even deeper level, through the research and writing of my books.

There are some nice benefits to exploring life through my writing. For one, I can write about someone tripping and falling in a pile of rhino dung (yes this does happen in one of my books) without, thankfully, having to do it myself. I can experience the heartbreak Miranda feels at having to decide between the man she loves, and the family she desires, without my own heart breaking (though my heart does break for Miranda and the pain she deals with). And I get to open up these worlds, and let my readers in to explore with me.

I love my job. I love being able to write about all these different places, different people and different issues. Though I’d like to explore more the world beyond the pages of a book (I don’t know that I could ever get to all the places I’d want to visit and see in this lifetime), I love being able to explore the world in a different way, through the beautiful characters I meet and the fantastic romances that unfold between them.

And I hope you’ll explore with me, and take a look at my newest release Valentine Next Door, now available with Totally Bound Publishing. Read an excerpt below and find out more about Jeremy and the sexy librarian he lusts after living right next door, Miranda. 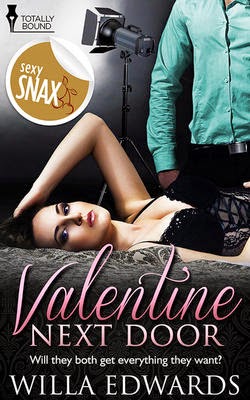 Jeremy Callahan has been in love with his next door neighbor, Miranda Valentine, since he was fifteen years old. As a teen he used to watch her, fantasizing about how he could make her his. But he never acted on it. Miranda was older, married and out of his league. Forced to return home ten years later after being injured on a photo shoot, all those old feelings return, and this time there's no reason to keep them at bay. She might be a decade older than him, but Jeremy's not about to let a few numbers stand in his way.

Since her husband's death, Miranda's been left with a big hole in her life. Never able to fulfil her dream to be a mom, Miranda isn't sure what to do with herself. She certainly isn't expecting to find the most gorgeous man she's ever met next door. She can't believe Jeremy Callahan is that sexy younger man, or that he's had a crush on her for years. When he kisses her, all bets are off. Jeremy's young, gorgeous and makes her feel more than anyone has before.

But she knows he can't want the same things she does. He can't be ready to settle down and start a family, but she's running out of time. Will her dream of being a mother keep her from the man she loves? Or can they find some middle ground where they both can get everything they want?

“You need to get out of there, buddy,” Brett declared.

Jeremy huffed into the phone. He didn’t need his best friend to tell him that. He’d been back in his childhood bedroom for three weeks now, while the damn bone in his leg healed. Being waited on by his mom, unable to even leave the house, was driving him stir-crazy. After years of moving from place to place searching out the next great photo, sitting still was taking a serious toll on his mental state.

“Are you offering to let me stay at your place?”

“Fuck no. I like you, dude, but not that much.” Brett chuckled into the phone. “I’m not giving you a sponge bath.”

They both laughed. Best friends since elementary school, they’d done a lot for each other, but they had their limits.

“I can bathe myself, dude.” It required a plastic garbage bag and a few strips of duct tape, but he could do it. “I’m not that handicapped. I just couldn’t get up and down the stairs to my place.” His third-floor walkup in the city had seemed cool and Bohemian before his injury. Once he healed, he’d be looking for a new apartment in a high rise with a doorman and an elevator. Maybe a condo in a neighborhood that would be good for families.

He’d been thinking a lot about the future since his injury, not that he’d admit it to his buddy. Maybe it was the staying still, or maybe it was the injury itself, but the call of the road had tamed down to a gentle breeze. The idea of coming home to someone was starting to sound appealing. If it was the right person.

“Isn’t there somewhere you can go for a little while? Just for a break.” Papers rustling echoed over the phone.

Brett must be at work. The man worked from dawn to midnight some nights. Not that Jeremy could say much. He put in a lot of hours at his job too. But at least it wasn’t in an office.

Jeremy knocked his fist against the cast on his right foot. “Can’t drive with this thing, and I won’t get far walking.” All he could do was sit and think. About everywhere he’d been and where he might be going next. He’d never been much of a thinker. He was a doer. Whenever he’d seen what he wanted, he’d gone after it. Now, all he could do was spin his mind in circles.

“There’s got to be something you can do,” his friend declared.

But the words didn’t register with Jeremy. All he heard was the slam of a door. He stilled. His heart sped up and his cock perked to attention. It was a sound he knew well. A sound he’d waited for so often as a teenager and had now begun to anticipate each night since returning home. It was one of the few joys he had since he’d been stuck back in his childhood bedroom.

Next door, Mrs Valentine, the school librarian and the star of his every adolescent fantasy and most of his adult ones, shut her front door. He held his breath, waiting for her to walk through the house to her bedroom that stood across the small twenty-foot lawn from his own.

“Mrs Valentine’s home,” he whispered, even though, logically, he knew she couldn’t hear him through the walls of two houses.

“Are you fucking kidding me, dude? Mrs Valentine?”

Brett groaned, and Jeremy understood his pain. Just the thought of Mrs Valentine had Jeremy’s balls tightening and his dick hard.

“You were always the luckiest shit in school to live next to her.” Brett’s voice rumbled in his ear.

The sound distracted Jeremy—momentarily—from the beautiful sight before him. Jeremy wasn’t the only one who’d had a crush on the school librarian.

Willa Edwards has dreamed about being a writer since she was four years old. When she picked up her first romance novel at fifteen she knew she'd found her place and she's never looked back.

Welcome to Beyond Romance and congratulations on the release!

I can really relate to Jeremy's plight. I broke my leg a couple of years ago and suddenly realized just how non-accessible most of the world is!

Thanks for having me Lisabet. I completely agree with you, negotiating Jeremy around the world with his cast certainly took some work, especially in the bedroom. But he and Miranda figure it out.