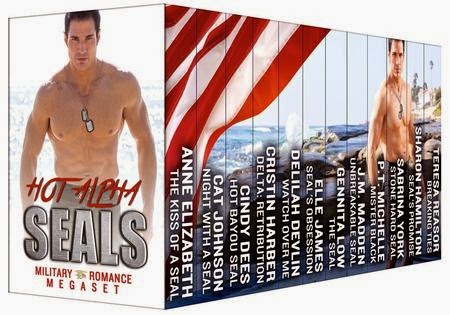 Sabrina York’s contribution, Stone Hard SEAL, is an action-packed story of a hostage rescue gone terribly wrong…at least, for the SEAL with the heart of stone, determined to avoid love at any cost. Though he has trained for any contingency, Ryder “Stone” Maddox is not prepared for Lily Wilson’s naively seductive wiles. Especially once she decides the hot, hard hero is the man she wants.

Read my excerpt, then read on for more about the other stories in the set!

“Are you hungry?” He asked because her belly growled loudly enough to attract pirates on the mainland.

“A little.” She licked her lips. “But I’m really thirsty.”

He pulled out the straw of his CamelBak and leaned forward, holding it to her lips. He should have shuttled off all his gear and just handed the damn thing to her because when she leaned in close and he got a whiff of her, he nearly passed out. You would think a woman who had been held prisoner by filthy pirates for nearly a week would smell bad. She did not. She smelled like heaven. There was a light musky odor of sweat—it was hot in the tropics—but it twined with something that was essentially female.

He’d never felt such hunger. It screamed through his soul.

And, on top of that, their faces were close. And she was sucking on the nozzle. And fuck. He was a warrior. A trained weapon. On a mission.

This was no time for a hard on.

But he was hard. Damn hard.

Her lashes flickered as she glanced up at him; she moaned as she swallowed. A shiver walked down his spine. Walked right down his spine and coiled in his balls.

When she sat back with a sigh, he put the nozzle to his lips as well. Not because he was particularly thirsty, but because he wanted a taste of her mouth, while it was still fresh.

What he really wanted was to kiss her. But she was the senator’s daughter and he was a grunt. That wasn’t going to happen. It couldn’t.

“Did…did you say something about food?” Damn lashes. Fluttering again. He had the urge to grab his Gerber and snip them off.

He pulled an MRE from a pocket on his left leg, read the label, and grimaced. He hated the meatloaf. He should have paid more attention when he prepped his gear. He had more in his pack, but this would do for now. “I have this.”

Her nose wrinkled as she studied the silver foil.

Yeah. Wait ’til she got a taste. He ripped open the packet, broke off a piece, and handed it to her. It was messy, because of the gravy, but he didn’t want to unload everything to find an implement. They needed to eat and go.

She took a bite. Her eyes widened. “Yuuum,” she said in an unconvincing tone.

It was all he could do to hold back his laugh.

“What…” She swallowed heavily. “What is this?”

“What does that stand for?”

Her brow wrinkled, and then she laughed.

And ah, what a laugh. A melodic trill. Some kind of sound he figured you might hear in heaven.

“Do you eat these often?”

“Not if I can help it.” He shoved a chunk in his mouth and fired it back. “But we have a long way to go today, and these have a lot of calories.”

She froze, a niblette of mystery meat halfway to her mouth. “How-how many calories?”

“About twelve hundred a meal.”

She gaped at him. “Twelve hundred?” She glared at the meatloaf as though it were made of turds. Then again, it might have been. “And you gave it to me? To eat?”

“Why didn’t you warn me?” She smacked him. It was like being batted by a kitten.
“Twelve hundred calories is my whole day!”

He grinned. He could burn that much with a good fart. “Perfect. It’s probably all you’ll get. Eat up.”

“For twelve hundred calories, I could have eaten a cheesecake.”

He looked around for the cheesecake.

She shoved her tiny chunk of meatloaf at him. “Here, you eat it.”

He pushed it back. “You eat it. We have a lot of ground to cover today.”

“There’s an island to the south.” He grabbed a stick and sketched out a quick map.
“We’re here. At the north end of this island. And the secondary extraction point is here.”

Her throat worked. “How will we get to the other island?”

“Oh, I wanted to.” She sighed. “My mother was afraid I would drown.”

“Not drowning is kind of the point of swimming.”

“She wanted to keep me safe.” He didn’t miss the exasperation in her tone. “I didn’t get to do a lot of things. Which is probably why— And wouldn’t you know it? The first time?”
She gazed at him as though she’d finished a sentence. As though he’d understood a bit of what she’d said.

“Well, don’t worry. We’ll get you home safe. And then everything will be just the way it was before.”

Her sudden frown mystified him.

THE KISS OF A SEAL by Award-winning Author Anne Elizabeth — Jessa Grainger’s world is rocked by the kiss of a SEAL, SO-1 Link Tyler. It wouldn’t be a problem for an ordinary person, but being a Navy Consultant working on the Amphibious Base as well as being engaged to a SWCC man make the situation very sticky.NIGHT WITH A SEAL (Hot SEALS #1) by New York Times & USA Today bestselling author Cat Johnson —When navigating military red tape begins to present more challenges than the enemy, it makes SEAL Jon Rudnick question his future. So does Alison Cressly, the one woman he can’t get out of his head.HOT BAYOU SEAL by Award-winning author Cindy Dees — SEAL Ford Alambeaux is a busted up SEAL on his way out of the teams. Trina Zarkos is being tossed out of SEAL training like every other female candidate…until they’re thrown together on a way off-book mission to see if she can play with the big boys or not.

DELTA: RETRIBUTION by USA Today bestselling author Cristin Harber — Fallen Navy SEAL and Titan Group’s Delta recruit Trace Reeves wants nothing more than a one-night stand to forget that his twin brother was killed-in-action. But when his one-time fling becomes his high value target, the lines blur between her rescue mission and saving himself.

WATCH OVER ME (An Uncharted SEAL story) by New York Times and USA Today bestselling author Delilah Devlin — Deke Warrick’s unsanctioned detail is to keep tabs on a congressman’s niece while she vacations in the Caribbean. He’s determined to keep his distance, from the beautiful Nicky Martir—until she’s snatched from their hotel room.SEAL'S OBSESSION (A Take No Prisoners story) by New York Times and USA Today bestselling author Elle James — Mission: Halt pirate activities off the coast of Honduras. SEAL TEAM 10's Jack Fischer goes undercover as a deck hand on a medical boat where he finds himself falling for the dedicated Dr. Natalie Rhoades.The SEAL (a Sex, Lies & Spies novella) by USA Today bestselling author Gennita Low — Mari Lords is tasked by her father to steal the seal that is an important clue in a round-the-world treasure hunt called The Game. When her opportunity comes during a party, she finds another kind of SEAL, Angel Marcello.UNBREAKABLE SEAL by USA Today bestselling author J.M. Madden — Maxwell Tate fights against a psychotic dream world, until he no longer knows what’s real. Lacey Adams knows she can’t save all of her cases, but can she salvage the unbreakable SEAL?MISTER BLACK A Billionaire SEAL Story, Part 1 (In the Shadows) by Award-winning author P.T. Michelle —He is Black: a deadly enforcer and masterful seducer. I am Red: a justice bleeder and willing participant. When our secrets converge in a passionate encounter, stepping out of the shadows just might be worth the risk.STONE HARD SEAL by Award-winning author Sabrina York —When Ryder “Stone” Maddox’s meets Lily Wilson—a senator’s daughter who is definitely off-limits—he’s determined to keep his distance, despite her irresistible allure. But Lily has plans of her own…to put his heart of stone to the test.

SEAL’S PROMISE by New York Times and USA Today bestselling author Sharon Hamilton —Navy SEAL T.J. Talbot, SEAL Team 3's bad boy, makes a deathbed promise to protect and care for his fallen buddy's wife and child. The only problem is, she hates him.BREAKING TIES (a SEAL Team Heartbreakers story) by bestselling author Teresa Reasor — Navy SEAL Oliver Shaker is blindsided when he learns that not only does his wife, Selena, have a life-threatening illness, but she’s also pregnant. Can the SEAL code he follows see them through? 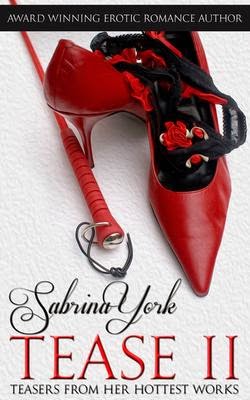 Posted by Lisabet Sarai at 5:03 AM

What a fabulous excerpt, Sabrina! You had me laughing out loud.

Good luck to you and the other authors of this collection.