If you scan the blurbs for recent romance best-sellers, you might come away with the notion that billionaires make the best lovers. Even before FSOG, rich guys were popular fantasy fodder, but the number of obscenely wealthy protagonists has climbed exponentially since. My primary romance publisher, TotallyBound, has a whole series of “billionaire” anthologies – Bound to the Billionaire, Promoted by the Billionaire, Sharing the Billionaire, and so on – and they sell very well. Apparently many readers feel that money is sexy.


I guess I can understand this, at some level. Today's billionaire plays the same role as the fairytale prince of yesteryear. He can fulfill the heroine's (or second hero's) every desire – not just physical desires but material ones. Especially given the worldwide economic downturn, I can see how a hero who could solve your financial problems with a snap of his fingers might be very appealing.


At the same time, I've never personally cared whether a lover (or a hero) was wealthy. The whole question seems irrelevant to me (perhaps because I've always been able to support myself by my own efforts). The trend seems a bit of throwback to an earlier time when women married mostly for financial security. Furthermore, relationships between a rich individual and someone less financially advantaged are not nearly as easy as some romance novels would have you believe. There are likely to be huge gaps in values and expectations that are bound to take their emotional toll.


I grew up in a middle class environment. I'm a third generation bargain-hunter at Filene's Basement. (If you don't know what that is, Google it!) I don't care what brand of watch I wear, as long as it tells the time. I'd consider spending $500 on a pair of shoes just because they had a designer label to be a ludicrous waste of money. On the other hand, my wealthy brother-in-law, although he's no billionaire, cares deeply about things like this. They're part of his self-image. I'm not criticizing him, just highlighting the differences in our perceptions of what is important.


Given the above, you might well ask why I have contributed a story to Totally Bound's most recent billionaire book, Bound to the Billionaire. Okay, I admit I'm hoping to cash in (so to speak!) on the billionaire craze. However, I also wanted to explore the sort of issues I've raised above. What happens when two individuals from different social worlds are drawn together? Can love indeed bridge the gulf in circumstances, expectations and ideology?


You'll find the blurb and an excerpt from my historical “billionaire” tale Challenge to Him below. It's part of the anthology Tied to the Billionaire, which also includes stories by Amy Armstrong, Sam Crescent, Tanith Davenport, Cheryl Dragon and Willa Edwards. It's also available as a single author title.


What do you think? Is money sexy?

Oh, and you might be interested in knowing that I'm working on a new book, entitled The Gazillionaire and the Virgin. It's not what you think! But I'll leave that for another post.


Challenge to Him by Lisabet Sarai


All the wealth in the world can’t buy willing surrender. 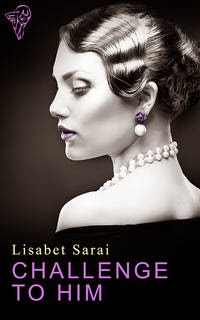 Independent, progressive and well-educated, labour activist Olivia Alcott has dedicated herself to improving the lot of the workers who toil in the factories that have made Andrew and his class so wealthy. The strike she organises triggers a confrontation between her and the handsome billionaire. Although their disparate backgrounds and values make them natural foes, something stronger draws them to one another—an intuitive recognition of complementary fantasies.

Andrew offers Olivia a bargain— better working conditions for the mill staff, in return for a weekend of her unquestioning obedience. Olivia will help him deflect the attentions of the potential mates assembled by his mother, as well as providing more intimate services. Given Olivia’s origins, a more enduring relationship appears impossible—but Andrew is not the sort to give up something he wants.


Andrew and Olivia paused together atop the mezzanine stairway that led down to the Great Hall. Music filtered up, along with the swell and ebb of conversation. Although it was barely nine p.m., Catherine MacIntyre’s ball was already in full swing. Her guests had arrived earlier than they would have under normal circumstances, eager to survey the competition—and to catch a glimpse of the unorthodox house guest Andrew had invited to participate in the closely scripted rituals of the wealthy. Gossip had spread the news far and wide. Functions at Wavecrest were usually well-attended in any case, but no one wanted to miss tonight’s festivities.


“Of course you can.” He tucked her arm under his and pulled her body closer. The French perfume he’d bought surrounded her with an aura of roses, but underneath, he thought he caught a whiff of her feminine musk. “You look exquisite—the gown is perfection—and you’re far cleverer than any other girl attending. You’ll charm everyone.”


He surveyed his companion with smug approval. With its simple, elegant lines, the peacock-blue silk he’d commissioned suited her to a T. The low-cut neckline left her arms bare and exposed a generous but not improper expanse of fair skin. The fabric clung tightly to her breasts and torso, then flared out over her hips and swept to the floor in a sapphire cascade. Unlike some of the fussy fashions he’d seen, the gown had little ornamentation, aside from the ribbons that hung from the waist, draping the skirt in gleaming loops of satin.


Diamond teardrops swung from her earlobes. A matching diamond on an almost invisible chain nestled in the hollow of her throat and a blue-dyed ostrich feather arched over her upswept, mahogany-brown curls.


Yes, the outfit was worth every penny of the small fortune he’d paid for it. Olivia Alcott was a pearl without price.


Olivia shook her head. “They’ll know the instant they set eyes on me. I’ll die of embarrassment.”


“Nonsense. No one can tell whether you’re wearing undergarments. With your figure, you’ve no need of a corset, and it’s warm enough that your nipples are scarcely visible…” He punctuated his assertion with a tweak that made her gasp.


“Olivia, did you not agree to be my consort this weekend?”


“And to obey me without question?”


“And have I not done so?” Her eyes sparkled in her flushed face and he knew she was reviewing the same glorious recollections that had him half hard in his tailored tuxedo trousers.


“Yes, yes, you’ve satisfied me in every way, my lovely slut. Tonight, though, I need you more than ever, here by my side. I must make it clear to my mother and to society at large that I am not in the market for a wife.”


“So I’m to play the role of your mistress, then?” The sharpness in her voice surprised him. He brushed his lips across her ripe ones, savouring her sweet breath.


“What do you care what those hypocrites think of you? You’ll never see them again.”


Olivia did not answer. She peered down the stairs, into the brightly lit hall—the lion’s den. “You’re right,” she answered at last, her voice low and resigned. “It doesn’t matter at all. Let us go.”

Ooh, I'm hoping The Gazillionaire and The Virgin is that gender-reversed thing we talked about a while back! And I'll be interested to see how you handled the billionaire tropes here. :)

Personally, I don't find the billionaire thing sexy all. It smacks too much of needing money to be happy, with a side dish of unequal power in a relationship based on who has the most $$ calls the shots. The richest people I personally know, are definitely neither the happiest nor the nicest. Quite the opposite in fact.

That said, I can see the fantasy element appeal. Which is why I will still continue to buy the occasional Tatt's ticket. ;)

As a friend says, "I wish you enough."

Yes, it's even partly dedicated to you! Unfortunately it's looking like it will be at least a novella, maybe even a novel...so it may take me a while to get it out there.

I hadn't even thought about the power differential issue, Cheyenne. Great point. Especially since really rich people sometimes seem to believe they are somehow more worthy than other people and/or that money can buy compliance.

Thanks for sharing your thoughts!