I don’t get to choose my characters, they choose me. And they arrive with all their own baggage already packed. Looks, names, foibles, kinks, the whole kit and caboodle is totally not my choice. This works for me – I love getting to know my characters as they tell me their stories.

Trey from Size Matters happens to be blind. It’s always a challenge writing a blind character, but it’s one I’ve taken on before. More times, actually, than I had realized. My first book featuring a blind character was Second Sight where Marc goes blind during the course of the book, but there are plenty more as well: Welcome Home, Love is Blindness, Wallflowers, The Sight of Home, Seeing Love.

Sometimes being blind is a part of what drives the book, sometimes it’s just a part of who the character is and that’s it. In Size Matters, it’s a bit of both. Being blind has affected Trey’s ability to go out and get what he wants in the bedroom, so when Lucien comes along, he seems almost too good to be true. However, the story isn’t about Trey’s blindness. It’s about a writer who is also a size queen. It’s about the man he meets who ticks all his boxes, even the ones he didn’t realize – or hadn’t admitted – he had. And in the end, it’s about love.

Trey is a natural submissive, but no one wants to take on a blind man. When Trey and Lucien hit it off, it could be the answer to Trey’s prayers.

Is Lucien exactly who Trey’s been waiting for, or is it too good to be true? 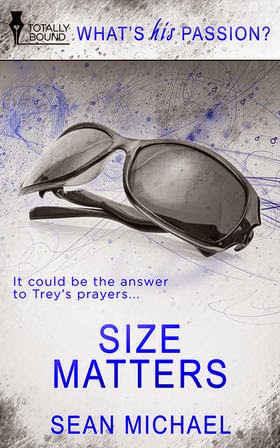 Trey could hear the teasing tone in Lucien’s voice and that eased his nerves more than anything else so far.

“Nope. I know, impossible to believe.”

“Well, it’s nice to meet you, Trey. It suits you better than Guy anyway.”

“At least they’re both single syllables, huh? Thanks for coming out to my side of town.”

“I wanted to see you and it was no trouble, honestly.”

Trey didn’t know what to say to that, so he didn’t say anything, he sipped his coffee and grinned. Okay. This was going okay.

“I have to admit, when I came to the signing, I wasn’t expecting someone…”

Lucien chuckled. “That too. I was going to say sexy.”

There was no way. None. Trey appreciated the compliment anyway.

“Do you mind if I touch you?” Lucien asked.

“I don’t guess so.” Trey didn’t think anyone had ever asked.

Lucien’s hand slid along his cheek. “Silky and smooth, like it looks.”

“Your cheek makes me want to know if your other cheeks are as lovely.”

What? Wait. Surely he’d misunderstood. “The other cheek’s the same.”

“I must need to work on my flirting. I imagine I rely too much on my eyes. It makes you a challenge.”

“You’re… Oh, you are something else. You have a blind guy kink?” Because that would suck, just to be some guy’s fetish.

“No, I have a sexy guy kink. I’ve never been with a blind man before. I could let you know if it’s a kink if we get together.” Lucien chuckled, the sound as amazing as the man’s voice was. “I hope I’m not being too pushy—I’m just used to going for what I want and I want you.”

“I don’t know what to say, man. I’m flattered.” And completely unsure about how to deal with this.

“I would love for you to be more than flattered.”

“Why not? And where do you pick up gay men who are blind? Is there a bar for that? I’m only half joking, too.”

“I haven’t met many. And how did you know I was gay? And bars are loud.” Trey never went to any.

“My gaydar is pretty good and you didn’t smack me when I touched you.”

“You know, rub in the hope that someone springs wood?”

“Ah.” Lucien chuckled again, the hand on Trey’s cheek dropping along his arm to his thigh. “And are you springing wood?”

I’ve got a $10 Totally Bound Gift Certificate for one random commenter. I’ll pull the winner on July 22 in order to give all time zones a chance to participate.

Often referred to as "Space Cowboy" and "Gangsta of Love" while still striving for the moniker of "Maurice," Sean Michael spends his days surfing, smutting, organising his immense gourd collection and fantasizing about one day retiring on a small secluded island peopled entirely by horseshoe crabs. While collecting vast amounts of vintage gay pulp novels and mood rings, Sean whiles away the hours between dropping the f-bomb and pursuing the kama sutra by channelling the long lost spirit of John Wayne and singing along with the soundtrack to "Chicago".

A long-time writer of complicated haiku, currently Sean is attempting to learn the advanced arts of plate spinning and soap carving sex toys.

Barring any of that? He'll stick with writing his stories, thanks, and rubbing pretty bodies together to see if they spark.

Great excerpt. I love seeing books about people with disabilities. My MIL is blind and she is independent with in bounds.
debby236 at hotmail dot com

I'm very curious as to why blind characters show up so often in your stories. Do you have friends or family with visual impairments? I think it's a major challenge to write a disabled character without making factual errors - let alone without causing offense.

Thank you for sharing your characters & their story with us. The book sounds like a good read. =)

Thanks for the giveaway!

I enjoyed the excerpt I'm a long time Fan of your Jar Head stories. It great to see books about MC with Disabilties makes the story more interesting.

Thank you for the wonderful except and great contest.
orelukjp0 at gmail dot com

LOVE IS BLINDNESS is one of my favorites (the first book to make me say, "oh, that's the allure of vampires!"), so I'd love to read this one!

Great excerpt, I believe you a winner on your hands.

Every book I've ever read written by Mr. Michael has been emotionally satisfying and this one seems to promise the same. Thanks for the giveaway!
taina1959 at yahoo dot com

Sean is most definitely one of my favorite authors. I can't help but fall in love with the variety of stories he's written and the characters he listens to, baggage and all. His quirky characters are too funny ( I.e. Toby from Malting.) thanks for having him on your blog!!

Nice excerpt and delicious blurb. Good luck on the release and thank you for the giveaway!

Love this excerpt. Funny & intriguing. Mr. Michael's bio also brought out a few giggles & I'm about to go his website.

Enjoyed the excerpt. Thanks for the giveaway.
turtle6422(at)gmail(dot)com

I really enjoyed the excerpt. This sounds like a very good book. I've not read very many books with blind characters in it. Thanks for the giveaway.
sstrode at scrtc dot com

i'm also a long time fan of Sean's. this one sounds like another winner. Can't wait to read it. Carolyn
j-coverholser at sbcglobal dot net

Glad you liked the excerpt -- I love writing all kinds of people, so it makes sense some of them would be blind.

I had several friends growing up who were blind, but really the characters just show up with all their info -- I don't choose how they are.

You're welcome -- I'm glad you think it sounds good.
And congratulations! You're the winner of the giveaway -- you should have already received your GC from Totally Bound.

Thank you so much, Gigi!

Mmm, Rock, Rig and Dick. Thanks so much, Shirley Ann :)

thank you -- that one is actually the only one where my character was deliberately blind, because that was what the call was for!

Thank you! I love having humour in my books :)

Thank you very much!

Thank you so much, Kristin, I'm so glad you've enjoyed my men and their stories!