The History of Rough Weather 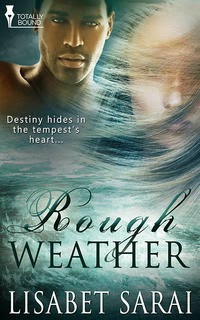 Today is release day for my new paranormal novella Rough Weather over at Totally Bound. This book is actually a sort of prequel for my novella Hot Spell, which was published way back in 2011.

Hot Spell tells the story of Sylvie, a loner drawn to the forests but forced into an urban existence for the sake of her career, and Aidan, a man hiding from the world and struggling with a terrible secret.

As the city sizzles in the grip of an unseasonable heat wave, Sylvie flees east to the pine-shrouded mountains. She doesn't mind being alone in the wilderness, but she's not the only being haunting the glades and the trails. Antisocial fire warden Aidan is fiercely attracted to the voluptuous beauty he finds sun bathing nude in a high meadow, but he must resist his overwhelming desire for the sake of her safety. The sun-bronzed man with the red-gold hair is cursed with power he knows will destroy her if they give full rein to their passion.

When I began writing Hot Spell, I was pretty sure how it would end - with Sylvie coming to understand her own power, the counterpoint to Aidan's. However, much to my surprise, during the last few pages, two new characters showed up. I really didn't expect this at all, but as they walked onto the scene, I realized they'd need their own story someday. 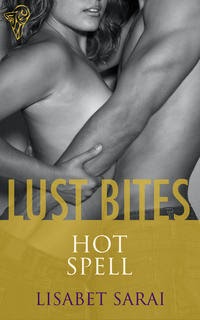 I was happy to oblige.

Anyway, to celebrate the release of Rough Weather (which has been a long time coming - it was accepted in mid-2012!), I thought I'd share part of the ending from Hot Spell, where Ondine and Marut first burst from my imagination onto the page. Furthermore, I'm giving away a copy of Hot Spell to one person who leaves a comment. What I want to know is, should I write a third story in this universe, a polyamorous tale featuring all four of the Elementals? That's clearly suggested by the snippet below. Would you like to read more?

“That tickles!” she protested.

“What?” Aidan probed deeper into her sex. “This?”

“But I’m not doing anything…”

Another delicate touch, climbing up her hip. Sylvie opened her eyes and gasped in wonder.

A strand of some vine coiled up from behind her, brilliant green against her sooty skin. As she watched, it slithered across her flesh, sending out new shoots, bursting into clusters of emerald leaves as it travelled along her limbs. It twined around her hips, sending runners into the thicket of her sex, cascading down her belly to encircle the pillar of Aidan’s cock. Moment by moment, the delicate strands crept over their flesh, binding them together in fragile, living chains.

“What the heck…?” Aidan looked alarmed.

Indeed, the crawlers were sprouting from the soil all over the clearing, turning the blackened ground green once more. The strands wound their way around the charred remains of the trees, spiralling to the tops to explode into verdant foliage.

The light grew as sunrise neared. The rain stopped. The mist glowed around them, as though they were in the heart of an emerald.

“The earth. She’s healing herself.” Sylvie felt a deep sense of reverence.

“No,” Aidan replied, sitting up to survey the marvels around them. “I think it’s you. You’re healing the earth.”

“What are you talking about?”

“Remember what I told you? About Elementals? Not just fire? I believe that you’re an Earth Elemental, Sylvie. You can control the earth and summon growing things.”

“But it would explain so much, my love.” He grasped her hands, sending the usual thrill up her spine. “That’s why our coupling didn’t kill you. You’ve got powers, as I do. Powers you’re not aware of.”

Sylvie suddenly remembered the landslide—the peace that had come over her and then the peculiar way the earth had simply stopped moving. Had she done that?

“I’ve watched you, moving through the forest. You’re at home in nature, in a way that I’ve never seen in another woman. You belong in the forest, in the fields, on the mountaintops. I’ll bet that you hate living in the city.”

“You’re right. It’s torture. I can hardly stand it. But an Elemental? Some kind of god? What would it mean?”

“For one thing, it means the two of you can be lovers—mates.” The voice was low and musical, like a river laughing over polished stone. Aidan and Sylvie turned to see two figures emerging from the mist.

One was female, tall and willow-slender, with a complexion like moonlight and silvery hair that fell to below her waist in a shimmering cascade. The other was male, stocky and powerful, with skin like ebony and a wild, wiry, inky cloud haloing his skull. Both were naked. Both shone with an unearthly beauty.

“I am Ondine,” said the woman, answering Sylvie’s unspoken question. “And this is Marut. We were called by your coupling.”

“You’re Elementals, too.” Aidan rose, brushing off the twining lianas, and helped Sylvie to her feet. There was no question in his voice.

“Of water and air,” said Marut, stretching out his arms. A warm wind rustled the new foliage cloaking the burned-out clearing. Sylvie felt a stir of lust, mingling with her wonder. Her guilt didn’t quite manage to suppress her desire.

“We’ve been waiting for you—to complete the square, the four-way connection. Without all four elements, the world is unbalanced.” Ondine twirled on her toes, her fingers rippling, and the new leaves shed raindrops on them all. She held out her hand to Aidan. “Come, my lord of fire.”

Her lover took a step forward. A stab of jealousy made Sylvie reel. His penis was rock hard.

“Fear not, earth lady.” Marut’s voice rumbled like thunder. He stroked her bare shoulder. Her sex fluttered in some invisible breeze. “No one is going to steal your mate. He is yours, as Ondine is mine.”

Don't forget to leave a comment with your email address! And download your copy of Rough Weather today! (TB can send the book directly to your eReader, just like the big guys.)

Loved your excerpt, Lisabet. What an original idea, and beautifully written. Definitely go with the trilogy!

WOW!! That excerpt was awesome ;) Congrats to LIsabet on the new release! definitely going to be adding to my wishlist! Thanks for sharing!

Congrats on the release of Rough Weather, Lisabet :)
The excerpt from Hot Spell is AWESOME! PLEASE, please write that third story in this universe, a polyamorous tale featuring all four of the Elementals. I'd LOVE to read what happens.

I love elemental stories. I sort of like the idea of a trilogy but not sure I go for the polyamorous idea. I like the couples mono or M/M/M in stories. I don't like adding a second female.

I recently wrote an elemental novel that I was advised to expand into a series, so I know the appeal of those powerful elemental mages. Mm-hmm.

Forgot to add, to be honest, even though I love the sound of the first two books, I would skip reading the last or forgo reading the series if I knew it would end up in a foursome.

All 4 would be lots of fun! Thanks for the giveaway!

yes, would be interesting

Thanks, everyone, for your comments and opinions!

I guess the jury is divided when it comes to foursomes....

Anyway, congratulations to Penumbra, who's my winner in the drawing.

And by the way, I have a giveaway today (Sunday) and one starting tomorrow, too! (Both here at the blog)