Talk about obsessions! They’ve been a feature of my life since childhood. There’s always some dead guy—some heroic figure from history—hanging around my imagination, ruining any kind of real life I might have had. Back in the fifties, when I was a preteen, when other girls had pictures of Elvis, the Frankie Avalon or Ricky Nelson on their walls, I had pictures of…well, you don’t want to know, really. Just let me say that he’d been dead for 150 years, and that the last time he thrilled the heart of any teen girl was in the 1770’s.

As I matured, so did my desires. Needless to say, it’s a bit difficult to start living with a dead man, no matter how much you adore him. Still, I had to try. My interest in history wasn’t always pure of heart, to say the least, but I confess, it motivated a lot of research. My imagination wasn’t the kind that could put on something approximating period dress and then go for it with my ghostly lover, oh no! I craved authenticity, even if it meant that one side of me froze while I made love on a bear skin rug in front of the fire.

So, when Mozart walked into my life in the early ‘80’s, he set off a fateful--at least for me--train of events. I had to get it on with this ghost, and he made it easy. “Mozart’s Spirit Sends Telepathic Messages” was not just a headline from the Enquirer, it was, for a lot of us Mozart Heads, the real deal.
People in posh NYC apartments sued neighbors after months of Mozart’s Requiem played endlessly and at full volume. Like so many star phenoms, Mozart had surged to the top of the charts in our poor brains. He sent urgent telepathic messages to hundreds of thousands of us.

I was one of those crazed fans, devoting almost twenty years to writing novels about his women. I constantly revised them and marketed both over years, all the time listening to nothing but him! It was on fire for the guy.

The single party I gave every year was for his birthday. My writer friends were also struggling with manuscripts, with a search for agents or publishers, with jobs and family who could not understand our financially unproductive and endlessly humiliating passion for writing, attended faithfully. Some of them drove through snowstorms from other states. There was wine, and 18th Century food of all kinds, steak and kidney pies and syllabub prepared by the hands of Juliet the Certifiable.

I did get two books out of this mad “relationship”, stories which will time travel you back to the riotous nights when the World’s First Superstar rocked Vienna.

Have you ever been obsessed by a public figure - living or dead? Tell me about it in a comment and you might win your choice of a print copy of Mozart's Wife, or a PDF of My Mozart. 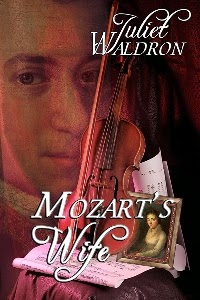 Giddy sugarplum or calculating bitch? Pretty Konstanze aroused strong feelings among her contemporaries. Her in-law's loathed her. Mozart's friends, more than forty years after his death, remained eager to gossip about her "failures" as wife to the world's first superstar. Maturing from child, to wife, to hard-headed widow, Konstanze would pay Mozart's debts, provide for their children, and relentlessly market and mythologize her brilliant husband. Mozart's letters attest to his affection for Konstanze as well as to their powerful sexual bond. Nevertheless, prominent among the many mysteries surrounding the composer's untimely death: why did his much beloved Konstanze never mark his grave? 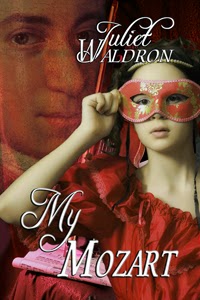 Blurb for My Mozart

Mozart was her teacher, her mentor, her rescuer--and, finally, fatally, her lover. ..

At dawn, in the marble palace of a Prince, a nine-year-old sings for Wolfgang Amadeus Mozart, then at the peak of his career. Always delighted by musical children, he accepts Nanina as a pupil. Gifted, intense and imaginative, she sees the great "Kapellmeister Mozart” as an avatar of Orpheus and her own, personal divinity.

His lessons are irregular and playful, but the teacher/pupil bond grows strong. Mozart's The Marriage of Figaro premieres, and Nanina, now twelve, is given a solo part. For her, this is the beginning of a long stage career. For Mozart, it marks the start of his ruin. His greatest works will be composed in poverty and obscurity.

During the composer’s last summer, his wife has left him. Chronically in debt and suffering the emotional isolation of genius, he takes refuge with his disreputable Volksoper friends, who want him to write a “peasant opera” for their audience. Nanina, now grown, and still in love with Mozart, is among their number. As he seeks solace among the women of the Volksoper, the charms of his young fan become increasingly alluring. No one, least of all the composer, understands the depth of her obsession or how a brief affair will permanently alter her life. 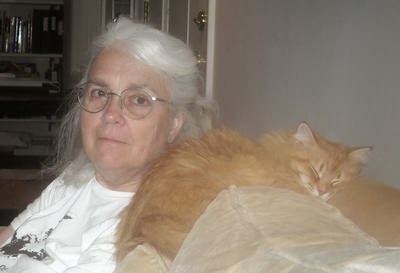 “Not all who wander are lost.” Juliet Waldron earned a B. A. in English, but has worked at jobs ranging from artist’s model to brokerage. Twenty years ago, after raising her children, she dropped out of 9-5 and began to researching her way into The Past. Three of the resulting thirteen historical novels are now published. Mozart’s Wife won the 1st Independent e-Book Award. Genesee won the 2003 Epic Award for Best Historical. She enjoys putting what she has learned about people, places, and relationships into her stories.

Welcome to Beyond Romance. Mozart *is* a fascinating and enigmatic character. I can see the parallels with today's rock stars.

Sounds like you channeled your obsession in a productive direction.

I can't say that I have ever been obsessed with a public figure but I find your obsession with Mozart fascinating. That is not someone I would have thought to be obsessed with.
lringel(at)comcast(dot)net

Mozart would be an intriguing person to write about. The blurb makes for great promise.
debby236 at gmail dot com

Wonderful post Juliet, well at least no-one can say you haven't made sacrifices for your writing, bear skin rug??? I don't think I could come at that.

A fun post. Never thought about phantasizing about a dead person but a bear skin rug? That's something to think about!