Hi there, I’m romantic comedy author Lucy Woodhull, and I thank Lisabet once again for having me on the blog. I visited a while ago to chat about the first book in my Samantha Lytton rom-com series, THE DIMPLE OF DOOM. And much like a book sequel, I’m back, baby, to talk about, well, the sequel! It’s called THE DIMPLE STRIKES BACK, and it’s better than Han Solo and Princess Leia making out.

Ok, it’s not. Nothing is that good. Sigh.

Here’s a blurb for the series:

The Samantha Lytton Series: Obviously, the solution to a failed acting career and depressing dating desert is to take up with a dimpled art thief, get chased by thugs, lie to the police and almost die.

That's not what Samantha Lytton thought would happen when she kissed the guy who said he was an accountant at the office Christmas party. But in her defense -- it was an amazing freaking kiss. The kind of lip-lock that frustrates you in the wee hours.

Turns out, thinking with your nether regions can lead to poor decisions. Or perhaps...fantastic ones. Samantha and her burglar travel from Los Angeles to Vegas to Paris to London on adventures that bring Samantha's wildest dreams of stardom to fruition. After spending years falling on her face, she learns to fight for herself and her heart's desire. You can't choose who to love, but you can try to keep his cute butt out of jail and in your bed.

No matter where in the world you go, or how many hot movie stars you kiss (um, professionally), you never forget your first criminal. Hopefully, only criminal. Although bad boys with dangerous dimples are nothing but trouble, a relationship can still work as long as the goons don't get you. And if they do, well, at least an actress is good at improvisation. 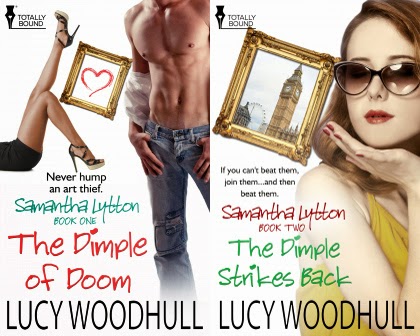 My heroine Samantha often finds herself in a heap of trouble. It’s not her fault, unless you count her propensity to fall for a certain art thief. He has a really nice butt, which has led many an otherwise sane woman off the garden path and naked into the shrubbery.

Over the course of her adventures, she has learned many things about the nature of the universe, the things that money can buy, and hot oral sex. With the lofty spirit of knowledge in mind, I present to you her rules for living a successful life. Or at least an interesting one. These all come from the DIMPLE books (although I cheated and added a couple from book three, which hasn’t come out yet!)

The last one means a lot to me, and as soon as I wrote it, I knew that it would be something I’d always try to remember. Even when dark times come in life, we are each the person who comforts ourselves, who lifts our body back up again, brushes off the ol’ keister, and gets going. And most of us don’t give ourselves credit for being our own heroine! But we are, and, yup, we’re all freaking amazing. Even when we forget that we are. 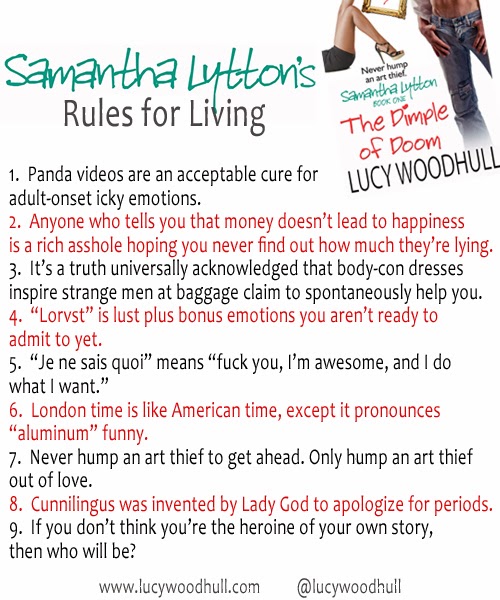 Excerpt: THE DIMPLE STRIKES BACK by Lucy Woodhull

The deets: I present you with a love triangle. (In the book, it turns into the dreaded love parallelogram, which is extremely complex -- I do not recommend.) Here’s the setup: Samantha and Danny Zhang (insanely hot British movie star) are in London to film a heist caper called What Could Go Wrong? After a long night of shooting, they go out to breakfast to the Princess Margaret. Samantha’s ex, Sam (be-dimpled art thief), invites himself along. He’s in town posing as Samantha’s assistant named Zach. (Got it? There’s a quiz after.)

We three grabbed a booth in the back. Through some sort of dark wizardry, Sam arranged it so that he sat between me and Danny in the curved seat. As he bumped my hip to scoot in next to me, he smiled, grim satisfaction in his tightly-set mouth. I remembered I’d told him that me and Danny were doing the hump-de-hump. I smirked at him with a challenge of my own. He thought he would separate me from my international movie star, whom I enjoyed for good reasons and not because it irritated him?

Oh, was he wrong.

We settled in, dispensing awkward, pleasant smiles all round. A middle-aged, cheery waitress took our orders of three full English breakfasts, with mimosas to start. I wasn’t sure those things went together, but when in the Princess Margaret…

And when you’re sitting at one point of an actual, physical love triangle…

Never in history had three people reached for champagne glasses with such speed. Danny bounced the ball and launched the first volley. “So, Zack—how long have you been Samantha’s assistant? Are you enjoying London?”

Sam settled back and spread out his arms. His fingers crept toward my shoulder, but I leaned sideways to search for something pretend in my purse. “I’ve worked closely with Samantha for a little over a year now. I like to stay on top of her.” He chuckled, and I snapped my head up. “You’ve got to ride these artist-types, or else they go off, half-cocked. Know what I mean?”

Danny played with his napkin, clearly having no idea what Sam meant.

“He’s been to London before,” I added to shut Sam the hell up. “I thought today went really well. We made up for some of the scenes we got behind on last night.”

My adorable co-star winked at me adorably. “It helped that no one tried to destroy the museum tonight.”

“I did so try! I may be clumsy, but I’m not a quitter.” I’d had a bit of an ‘oops’ encounter with a Plexiglas box containing Roman coins while suspended above it by a crane. There’s a steep learning curve to high-wire flying. Could happen to anyone.

I giggled and tossed my hair. “It’s so gentlemanly of you to avert your eyes, the way you do sometimes.”

His chuckle curled around us, warm and soft, and caused Sam to utter a sound like that of a wounded moose. Sam tried to cover by draining his drink.

“Did you hear about that fifty-car pileup in Edinburgh?” Actual crickets chirped after Sam said this.

“I’m going to visit the ladies’ room,” I announced, as thoughts of peeing were preferable to giant car accidents. I scooched out of the booth and gave Danny a cheery, obvious shoulder squeeze on the way. The moose-gurgling noise haunted me all the way to the toilet.

A fresh round of mimosas arrived, thank goodness. Danny didn’t even seem to think that me being so cold to Sam was weird, for he stared at my ex as if he were leprous, or perhaps suffering from a disease of the brain. I’d never seen Sam so awkward—he could normally win a charm competition from two counties away with one dimple tied behind his back.

Sam took a deep breath, drained half of his fresh glass and said to Danny, “What’s next for you, Daniel? After What Could Go Wrong?”

Ah, an actual thing a human being might say! He was fighting dirty now.

“I’ll shoot a film adaptation of Midsummer Night’s Dream next year, but I think I might take some time off the latter half of this year. Reconnect with real life.” Danny glanced at me ever so briefly. “Remember what’s it like to see friends, relatives. Maybe even date a little.”

A whole mess of subtext rippled beneath those three words, and a wave of guilt washed over me. I had exactly no reason to feel guilty, but the raw, pained lines on Sam’s face and the tense cords of his neck made my innards recoil. A full minute of silence descended. Danny bit his lip and shot me a warm look, which I returned. It wasn’t his fault that Sam and I had enough history to fill a college textbook.

The food arrived, smelling wonderful and large enough to feed, well, a ploughman. Holy crap, these English could embarrass even an American breakfast—there was sausage, ham, hash browns, eggs, tomato, mushrooms, beans and something black and circular. “What is that?” I asked Danny.

Sam cracked his first real smile of the day. “Don’t tell her until she tries it.”

“Don’t be.” He leaned in and locked onto my eyes. “You’ll like it. You like anything having to do with meat.” The way he imbued meaning into ‘meat’ made me straight-up blush. My entire face heated, and the fire spread south until I tingled in a way that no lady should at breakfast.

To conceal my overheated everything, I was forced to try the mystery meat. He’d practically dared me, anyhow. It tasted salty, crumbly—a richness on my tongue that lingered. “Mmmmmm,” I offered to all and sundry. This pleased both men greatly.

I stopped a fresh bite halfway to my mouth. But then I thought…is blood any different from meat? The second bite tasted better than the first. I fancied I could detect the tang of blood. It made me feel…metal. Powerful. As if I were a queen who devoured my enemies’ hearts and washed them down with champagne. And then went home to her castle to find her two husbands awaiting her. One with a dimple, and the other with an honest smile that warmed the heart…

Perhaps I read too much into pudding.

I couldn’t help my laugh at Sam getting my goat, and he cocked one eyebrow at his win before he tucked into his own food. When I turned to Danny, I found him watching me hazily. I blushed anew.

Why couldn’t I just have both? I decided I needed to find myself a romance novel that ended with a duchess and her two stable boys living happily ever after. Perhaps I’d produce the movie based on the book…

My breakfast grew cold while I was woolgathering dirty thoughts. Not the first time that had happened.

You can learn about both books in more detail, and read excerpts here.  Drop me a comment below and share your hard-won life lessons to win a chance to win digital copies of my books!

Thank you for reading, and for Lisabet for having me!

Lucy Woodhull has always loved le steamy romance. And laughing. And both things at the same time, although that can get awkward. Her motto is "Laugh and the world laughs with you, cry and you'll short-circuit your Kindle." That's why she writes funny books, because goodness knows we all need to escape the real world once in a while. She believes in red lipstick, equality, and the interrobang. Hailing from Southern California, she daydreams with her husband and a very fat cat who doesn't like you.

Email ThisBlogThis!Share to TwitterShare to FacebookShare to Pinterest
Labels: A Challenge, guest blogger, Lucy Woodhull, romantic comedy, The Dimple of Doom, The Dimple Strikes Back

This is hilarious, Lucy! "What Could Go Wrong?" indeed.

I was surprised to learn that you're American. Your "voice" - well, Samantha's voice - struck me as very British.

Anyway, thanks for being my guest and good luck with The Dimple Strikes Back.

You crack me up, Lucy! I love your writing style.
It's highbrow hilarious.Leave it to Lisabet to
find you...

Heh -- I grew up on a steady diet of Merchant Ivory films and have an impeccable British accent. My husband constantly mocks me for my old-fashioned word choices.

"Highbrow hilarious" might be my new tag line. Thank you thank you!