Hi Lisabet, and thank you for having me at your blog today! I know it seems as though the holidays were just here five minutes ago, but we are only a month away from Valentine’s Day. I’m able to keep careful track of these things because the grocery store is kind enough to change out the cupcakes with plastic Santa Claus’s to the ones with plastic pink and red hearts.

I’m curious how important getting away for Valentine’s Day is for you. This year it falls on a Friday, so it could be a great opportunity for a romantic weekend trip. I’ve stayed at the beach this time of the year. You can get better rates and if you get the right room, there’s nothing like the crash of the surf and the backdrop of a fireplace to heat up the romance. What would be your idea of the perfect Valentine’s weekend getaway? Do you prefer the beautiful and relaxing outdoors, or is a luxurious restaurant or resort more your style?

Valentine’s Day fell on a Saturday in 1925, and in the newly released Tarnished Glitter (Gin & Jazz 3), Jack Stone’s older film star lover, Roman Pasquale, plans a romantic getaway for their first Valentine’s together. The pampered screen idol is sacrificing his own preferences to take Jack somewhere that the young actor would enjoy – the Sequoia National Forest. Jack loves all that nature falderal that Roman doesn’t understand. If it was left up to him, he would go to a five-star resort. To further add to Roman’s distaste for the outdoors, Jack warns him that bears can get into the cabin if they smell food. Despite that, Roman is determined to enjoy his beautifully sweet lover.

(This is book 3 of a four part serial best read in order. The series begins with Hollywood Bound) 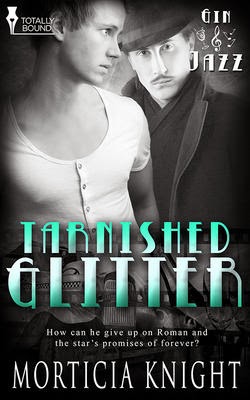 Jack sat on the rug close to the fire. He held his hands out in front of them to warm them. He doubted Roman wanted icy caresses for their Valentine’s lovemaking. He giggled at the thought of Roman’s reaction to frozen hands on his skin. The door opened, and Roman rushed through it, a concerned expression on his face.

“Are you all right?”

“Yes, my dear Jack, but I am freezing my ass off. That would greatly disrupt our evening’s activities, so I suggest you scoot over and let me warm myself.”

Roman bent to sit next to Jack, then straightened up again.

“What?” Roman sure was acting funny.

Roman turned and went to where the bed was in the corner of the one room cabin. He grabbed the pillows, the bedspread and blankets, and dragged the whole mess over to them.

Jack did as he was told, and watched as Roman laid one blanket over the rug to completely cover it. He dropped the pillows down, and left everything else piled between them and the sofa.

“Jack. I don’t think I shall be able to properly service you rolling around on that dead animal. I’d rather not be reminded of the existence of bears.”

Jack plopped back down and watched as Roman took a deep breath, and went to pour them some champagne. He sat down gracefully next to Jack, effortlessly balancing both glasses in his hands. Jack was reminded of just how stunning a man Roman really was. He was really very lucky to have his love.

After handing one drink to Jack, he raised his in a toast. “To our first Valentine’s, one of many.”

Jack clinked his glass with Roman’s and took a long sip. His stomach was so much better now that he wouldn’t have minded a gin, but Roman had kept it away from him ever since that night.

“Since you wouldn’t allow me to give you a present, I shall give myself to you instead. Would you like to unwrap me?”

Roman had the gleam in his eye that would always immediately harden Jack. He longed to have Roman driving into his ass—it had been days. There had been plenty of other intimacies, but they had been saving themselves for a good fuck on their holiday trip.

Jack sat up on his knees and reached for the front of Roman’s pyjama top. As he undid each knotted button, the light brush of his knuckles against Roman’s skin made the hairs on his arm stand up. Even after hours upon hours of sharing their bodies, just barely touching Roman still gave him a thrill.

Once Roman’s top was removed, Jack couldn’t resist latching on to one of Roman’s dark nipples. Roman hissed in through his teeth, and arched his back. Jack straddled him, and grasped Roman’s back by reaching underneath his arms. Roman grabbed Jack’s waist. Jack licked and nibbled until the brown disc peaked to a hard nub. Then he switched his attention to the other one, teasing it mercilessly. Jack was rewarded with the sliding thrust of Roman’s hardness against his own shaft still shielded by the satin of their pyjama bottoms. Jack ground into Roman, and they rubbed their erections together in a frenzy of desire.

Roman flipped Jack onto the ground so that he faced him, and ripped his shirt open, shoving the fabric aside. He bit into the crook of Jack’s neck. Jack first yelped, then moaned. He pumped his hip into Roman’s thigh. He needed to come, even though they had barely begun. Roman reached under Jack’s head with one hand to cradle him there and used the other to grasp and squeeze his backside, pressing them even closer. Jack responded by wrapping his legs around Roman’s waist.

“Yes.” Roman’s whisper was feral against his ear, his hot breath sending an electrical charge from Jack’s spine to down very low in his abdomen. “Come.”

Jack clutched Roman’s shoulders, and they both let go at once. Jack’s cry was so loud that he shocked himself. Roman’s answering cry was guttural, like an animal. Their coupling had been quick and frantic. Despite the deeply satisfying orgasm, he had looked forward to a long slow night with Roman, as well as the feel of his lover inside of him.

At last, Roman’s breathing slowed somewhat, and he propped himself up on his elbows to look down at Jack. Roman smiled in a contented way and brushed Jack’s soft waves of hair off his forehead.

“I’m not disappointed. That was wonderful.”

“As wonderful as my cock filling you? Thrusting inside of you so hard that you can’t even move?”

Now he understood Roman’s game. Already it had worked. Roman’s words combined with his smouldering stare was bringing Jack’s dick back to life.

“And don’t I always give you what you want?” M/M Erotic Romance author Morticia Knight enjoys a good saucy tale – after all, who doesn’t? Since she loves several genres, you may find your heroes in a contemporary, historical, paranormal or sci-fi setting. One of her passions is bringing people's fantasies to life on the page, because life is too short for even one boring moment. Her stories are volcanic in heat, deep in emotion, and sprinkled with doses of humor.
When not indulging in her obsession for books, she loves the outdoors, film and music. The Pacific Northwest is the ideal spot to enjoy both hiking and beachcombing. Once upon a time she was the singer in an indie rock band that toured the West Coast and charted on U.S. college radio. She now resides on the northern coast of Oregon, where the constant rain and fog remind her of visits to family in England and Scotland when she was a child.
She is currently working on the Gin & Jazz series about the glitz and glamour of 1920’s Hollywood and additional installments of the Uniform Encounters series.
Find Morticia here:
www.morticiaknight.blogspot.com

Sorry I wasn't here to welcome you yesterday. I was away on business.

Hot excerpt, and I love the cover. Good luck with the series!

Thank you Lisabet, and for hosting me! ;-)