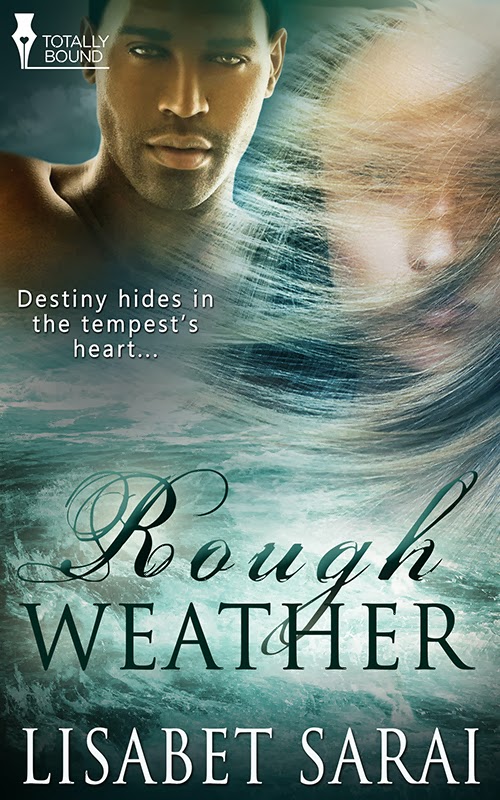 Just popping in to share the news that my paranormal short Rough Weather is now available for pre-order at Totally Bound! Buy now and the book will be delivered to you as soon as it is released (which I've been told will be 24 January, despite what it says on the website!)

To whet your appetite, here's the blurb and a snippet.

Ondine has always felt at home in the sea. Orphaned at birth and raised by her grandmother on the island of Martha’s Vineyard, she has never really questioned her extraordinary affinity for the watery world. She concentrates on her work as a marine biologist, spends her weekends relaxing among the waves and worries about human threats to her beloved ocean environment. Fears of a deadly pregnancy like her mother’s make her cautious about sex.

Marut chuckled. “Okay, okay! You’ve made your point, Ondine! So do you think my clothes are dry yet?” She’d hung his jeans and shirt out in the hot sun that had followed in the wake of the freak storm.
“Probably. I’ll check.”

“No, I’ll go.” He reached out to arrest her progress. She shrank from his hand.

A look of raw pain crossed his face. He sank back into his chair, his fists clenched on the table as though he wanted to smash something. “Do you…do you regret this morning? Because I swear, woman, I don’t.”

“This morning was…I don’t know, an aberration of some sort. I honestly have no idea what happened between us. It was like some drug.”

“It was your nature, calling to mine.”

“What are you talking about? That’s not me. I don’t fuck strangers—men I’ve known for less than ten minutes.”

Marut released a heavy sigh. He opened his hands and stared at his pink-brown palms. “I know you, Ondine. The instant we touched, I remembered.”

“Not in this life. But before.”

Uneasy doubt stirred in her chest. There had been something about him, in that first instant when their eyes met, something hauntingly familiar. She pushed the thought away, focusing her attention on her bandaged knuckles.

“Nonsense. You’re an engineer. I’m a scientist. How can you say such things?”

“There is much in this world that science cannot explain. You know that as well as I do. I saw you out there, diving and surfacing like some flying fish. Incredible.”

Posted by Lisabet Sarai at 9:09 AM