Do you believe in second chances?

I do.  As both a reader and writer of romance, I love flawed characters.  I don’t want to read or write about Mr. Perfect and his heroic lover, Mr. Even Better.  I want to read and write about characters with pasts that maybe they aren’t so proud of.  Characters who have experienced real life, with all its joys and sorrows.

Even a villain can become the hero of his own story, if he wants to change badly enough.  Some of my absolute favorite stories have featured characters who just want a chance to try again.

In the case of my upcoming release The Cost of Secrets, this means my heroes both have histories they’d rather not share.  Closeted police officer Dan’s shyness is exacerbated by memories of childhood humiliations.  Fitness instructor and college student Isaac seems to have his life together, but he’s hiding a secret shame.  Neither man truly believes himself worthy of love.  More than anything else, they each want a second chance—to live their lives on their own terms rather than on someone else’s.  Whether they can move forward together, despite the obstacles created by their pasts, is the central question of The Cost of
Secrets.

For Dan and Isaac, the main obstacles in their path are their own fears.  For other characters, the problems are external.  In the past few years, I’ve read stories with heroes that were hitmen (reformed or not), ex-cons, prostitutes, cheaters, liars, and former addicts.  Most of the stories were well-written enough for me to believe in the characters’ redemption and want to root for them to find their second chances.  I have read a few, however, in which I found a character’s actions unforgivable, or didn’t think he or she was truly regretful.  In those cases, I didn’t buy into the second chance, because I felt like the character hadn’t earned it.

What do you think?  Can any character be redeemed in the hands of a skilled author, or are there characters that shouldn’t get another chance?  Anybody have some good suggestions of second chance books for me to check out?

Cassandra Gold
www.cassandragold.com
Gay romance with a heart of gold!

The Cost of Secrets, coming January 9 from Loose Id!

(I'm hoping to have the cover any day now... but meanwhile you can enjoy one from my previous release, a suitably wintery scene...!) 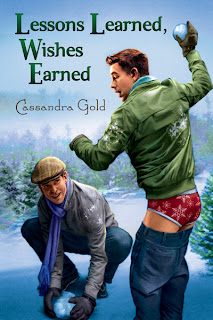 Police officer Dan Fallon knows the streets, but he's a rookie at romance, and still very much in the closet. He thinks sexy fitness instructor Isaac is way out of his league, until a dangerous situation breaks the ice between them.

Isaac Weiss has spent years trying to get his life back together after a series of terrible mistakes. The last thing he should be doing is trying to have a relationship with a cop, especially with his past. Too bad he's unable to resist sweet, shy Dan.

It's not long though, before the secrets both men are keeping rise to the surface and threaten to destroy the fragile connection they've forged with one another. Can Dan and Isaac find acceptance or will the cost be too high?

Welcome to Beyond Romance, and Happy New Year!

I definitely enjoy stories where characters get to redeem themselves after earlier mistakes. In QUARANTINE, the so-called villain almost kills one of the heroes, whom he wants as his own lover. The accident permanently maims the hero. In response, the villain vows never to relinquish any designs or claims on the hero, and in fact, joins the resistance movement, when he was previously an ally of the oppressive government.

In the sequel (if I ever get around to writing it), Kevin will be rewarded with a love of his own. But he'll have to work for his happiness.

THE COST OF SECRETS sounds great. Good luck with the new release!

Congrats on the new book, Cassandra!
I too believe in second chances. Your books sounds great and I'll definitely be adding it to my TBR list. :)

Congrats Cassandra! I believe in having second chances (I'd be screwed without them). I'll definitely check out your book!

Thanks for having me, Lisabet! I think the sequel you mentioned sounds like a great book. The redemption of a villain is wonderful to read, especially when I hated the person the first time around. It's always awesome if an author can make me love them in a future book.

Thanks for stopping by, Jen and Emily. :D