From Young Adult to Erotica

Thanks for hosting me, Lisabet! Hello, everyone! Thanks for dropping by.
For many years, I wrote young adult novels. I liked the fact that it allowed me to go back in time and experience a part of life that I never really got to enjoy. When I was a teenager, I was pretty miserable. I didn’t fit in, didn’t have any close friends, and couldn’t wait to get to college. But when writing YA novels, I could be whoever I wanted to be and make my characters do whatever I wanted them to. The entire world, whether it be contemporary, or paranormal, or fantasy, was under my control. And I didn’t have to stick to reality, either. I liked to create worlds with supernatural elements and fantastical creatures that don’t exist in reality. It was all about the escapism. When I read, I don’t read about real people in real situations. That’s boring. That’s life. When I read, I want to escape.

When I started writing erotica, I naturally tended to write BDSM. Why? I think it’s all about control again, and about escapism. I often have the feeling that between my job and taking care of two kids on my own, and trying to squeeze in as much writing as I can, that everything is spinning hopelessly out of control. I’m on a treadmill and I can’t stop running, even though I’d love to jump off and take a break, just sit down with a frappuccino and chill.
In my stories, women have a lot of trouble relinquishing control, or they tend to be the ones in control and they play a dominant role with respect to the men in their lives. Surrender is difficult for them, and that’s the case for Bella, a smart-ass, often bitchy girl who’s always on the defensive. She needs to learn to trust. She needs to learn that not every guy is out there to use her or hurt her. When she meets Darius, her roommate’s ex-boyfriend, who just so happens to be a whip-maker, she doesn’t think he can convince her to let go and try BDSM for the first time, even if it means getting an A on her Psych paper. If you want to know more about Bella and Darius, here’s an excerpt from the beginning of the story... 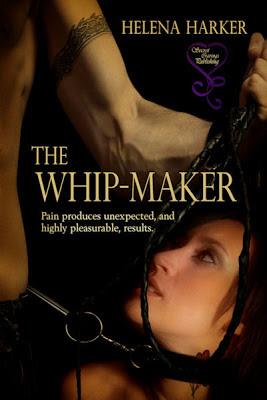 What a place to do research for a Psych paper. I hooked my thumbs into the pockets of my army camouflage pants and glanced at the huge black and red banner over my head: Welcome to Sextravaganza, your consumer sex show. Yeah, not exactly my number one place to spend the afternoon, especially since I managed to wander smack into the middle of the bondage section. Up ahead, I heard a woman advertise the benefits of the bondage bed, where you could immobilize your partner in all kinds of kinky positions. What the hell did a bondage bed look like, anyway? Did it come with its own rope and an assortment of D-rings?

I didn’t really want to know, so I hung a left down another aisle, coming face to face with a display of books about something called shibari, which was…let’s see…Japanese rope bondage. I picked up a hardcover issue and leafed through it. The models were tied with thick rope that formed complicated geometrical patterns over their bodies. I didn’t know whether I should appreciate shibari as a form of artistic expression or be disturbed at the sight of all these bound women. Flipping through a few more pages, I tried to make up my mind. The images had a haunting, sensual quality. Some of the rope patterns were exquisite. Okay, I decided, returning the book to its shelf, shibari was art.

Sighing, I readjusted my backpack over my shoulder, pulled the brim of my baseball cap lower over my eyes and scanned the crowd. People seemed pretty normal, a lot of couples strolling hand-in-hand, groups of men in their early twenties, and even a few white-haired ladies with their husbands. Before coming here, I pictured something totally different, like nymphomaniacs on the loose, women strutting around half-naked, and guys coming on to me left and right.

Not that I’d mind if guys came on to me. Sometimes it was fun to turn men down. It gave me a rush of power to grind a man’s ego under my boot. Yeah, I was a little bitter at the moment. A bad boyfriend led to a bad breakup, which led to a bad attitude. My life sucked big-time and I had three days left to hand in a five thousand word paper on the connection between the sensations of pain and pleasure. I had a title, “The Paradox of Pain,” and…absolutely nothing else. I didn’t even have an idea to start with, much less a full-fledged thesis to expand on. But I had questions, a whole lotta questions, and I planned to get some answers from my roommate’s ex-boyfriend.

Daphne dated Darius for a few months and when things got too intense, she broke up with him. What she meant by too intense, I had no idea. They were still friends, though. She said he’d be the perfect go-to guy for info about pleasure-pain dynamics, and I’d find him at “The Whipping Booth.” At first I didn’t get it until she explained what Darius made in his spare time. Whips, she said. Darius is a whip-maker. It took a while for her comment to sink in. Most men spent time in their garages tinkering with car engines, or they cruised down the highways on their motorcycles, or they went camping on the weekend. But Daphne dated a guy who had a passion for whips. I guess the only thing crazier than him making whips was the idea that people actually bought them.

Finally, after strolling past sexy latex cat suits, handcuffs with fluffy pink lining, and a stunning array of leather collars—some with wicked-looking spikes—I found a kiosk called “The Whipping Booth.” There was the man I was looking for. The whip-maker stood in front of a glass display case, feet apart like a soldier on guard, a long glossy ponytail down his back. Man, I wish my hair looked half as good. Of course my hair was cropped short, but I’d love to have the same silky-soft shine. This guy could star in his very own hair care commercial. I’d have to ask him what conditioner he used.

Damn, he must practically live at the gym to have those killer biceps. His cut-off T-shirt revealed well-defined muscle and tanned skin. He could sweep me off my feet, all one hundred and fifteen pounds of me, and do multiple sets of curls. And his chest? To die for. The T-shirt’s stretchy fabric hinted at powerful pecs and ripped abs. Sexy dark stubble covered his cheeks and his lips were full and firm, the kind of lips a girl wanted to kiss. Fuck, was I getting the hots for my best friend’s ex? No, never, not for a guy who believed sex and pain were a perfectly matched pair, like peanut butter and jam or popcorn and melted butter. Darius makes whips, remember? Stay away from him, Annabelle.

Helena Harker is a teacher by day, writer by night, a daydreamer who loves to escape to other worlds. Her fiction is populated by strong men, passionate women and lots of paranormal creatures. In her free time she enjoys photography and curling up with a good book. She is multi-published and also writes in other genres.

I think we all have very personal reasons for writing erotica. I write to fulfill all those fantasies I'll never manage to actually experience. And I think each of us incorporates some of our self into our characters.

Good luck with The Whip Maker. I love the cover!

Thanks, Lisabet! Yes, I think I also write to fulfill a lot of those fantasies.

I have to admit I have never written YA. But then I started reading adult level stories when I was about 14. I think for me its that I don't really understand what its like to be a kid, so I never read on a kid's level. I was already an adult in a teen's body.:-)

Hello Lisabet and Helena - congrats on your newest release Helena. I'm a huge fan of Helena's novels...a true addict (LOL)...no, seriously, I'm finding every so often I need a fix...thank goodness you do find time to write, Helena, or I'd go into...withdrawl:)
I love your style and voice from the very first story I read...take care my friend - and for goodness sakes - keep writing;)