[Today I'm talking to D.L. King, award-winning author and editor, about her latest anthology, Seductress. The book features tales about succubi - and if you've ever read any of D.L.'s other collections, you'll know it is both fabulously written and seriously hot! ~ Lisabet] 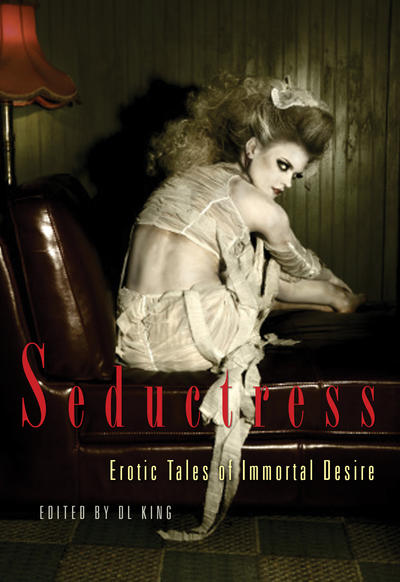 LS: You're known to have a particular fondness for female dominant erotica. How does Seductress fit in with those preferences? Are succubi the ultimate Dommes?

LS: This is your second paranormal anthology. The first, The Sweetest Kiss, featured vampires. Compare the two.

DK: Vampires are bloodsuckers and succubi are soul suckers. That’s the most simplistic comparison, but in reality, we often think of vampires as those who steal anything from us: time vampires, happiness vampires, energy vampires, etc. In that way, a succubus is very similar to a vampire; she steals from her victim also. Succubi have been considered soul stealers or life stealers. Ancient legends have them stealing a victim’s life force, leaving him a weakened husk or leaving him a soulless shell. They were also said to suck everything from their victims, leaving behind a lifeless corpse. But that’s awfully patriarchal, don’t you think? After all, they’re just women having fun in the sack. Guys should really lighten up!

LS:You've also edited a couple of fantastic lesbian collections. Are there lesbian succubi? Any in your book?

DK: Thanks, yes, the first anthology I edited was Where the Girls Are: Urban Lesbian Erotica. It was a Lambda Literary Award Finalist. You have a story in that one! And then 2012 saw the release of The Harder She Comes: Butch/Femme Erotica, which is also nominated for a Lammy. Keep your fingers crossed on that one! Of course there are lesbian succubi! C’mon, a girl’s got to get her life force in whatever way feels best, right? And yes, there are three lesbian stories in the book.

LS: What do you particularly look for when you're editing an anthology? What aspects of a story carry the most weight in your evaluation?

DK: Initially, that’s a tough question. I think I look for a combination of good writing and good story. I know that sounds simplistic. I’ll try to break it down because each of those is really of equal importance.

First, if the story is poorly written I have to decide if it’s going to be worth my time to “rewrite” it. It would have to be a pretty amazing story to make me do that much work. So, a story being well written is the first hurdle. But the story, itself, is definitely of equal importance. It has to interest me, perhaps be unique, be hot – be a good story. But second, since this is erotica, the sex has to be believable and hot. I don’t like flowery, or purple prose; I prefer plain language and comfort with sex. By that I mean the sex shouldn’t be either euphemistic or clinical, but natural. I don’t want a blow-by-blow description of the action, but I want to know what’s going on. That means “showing” rather than “telling.” It’s very difficult to explain that concept. Perhaps the best way to explain it is, let the reader feel what’s happening, rather than describing it to her.

LS: Last year one of your books (Carnal Machines) won first prize for erotica in the Independent Publishers Awards. Has that changed your attitude toward editing? Do you feel a lot of pressure to produce another award winning book?

DK: I don’t think I feel “pressure” to produce another award-winning book, but I definitely have the fever. I suppose I got the fever when Where the Girls Are became a Lammy Finalist. My goal is to produce the best book I can. I have somewhat eclectic taste and my books are all about what I like, so they tend to be pretty eclectic too. I just hope that “what I like” is what the literary award prize folks like, too. We’ll see. Seductress is nominated this year for the same award Carnal Machines won last year!

LS: Who came up with the theme for Seductress, you or the publisher? If you were the originator, where did the idea come from?

DK: The theme was definitely my idea. I’m the one who comes up with the ideas for most of my anthologies. So far, the only exceptions have been the first one, Where the Girls Are, (my publisher, Cleis Press asked me if I’d be interested in editing that one) and the one I’ve just finished taking submissions for, Slave Girls, also for Cleis Press.

I’d just finished reading Richelle Mead’s succubus series and loved it and I was totally addicted to Lost Girl, now on the SyFy channel but originally broadcast on Canada’s Showcase network. Evan Mora, one of the authors in Seductress, introduced me to Lost Girl. (Evan knows about my totally bizarre love of Canadian television…) And I thought hey, succubus erotica, it’s a natural! Cleis Press thought so too. I really hope it takes off because I think it’s a really good book.

In legend, it has always been the male who has actively tried to summon the she-demon who will be wonton and sexual and do anything the man desires and then disappear when he’s finished with her. Then he could claim his behavior wasn’t his fault, that it was the succubus’s doing and he was powerless to stop her. That’s the original fantasy.

She's beautiful. She's enchanting. She's mysterious and unfathomable. She's your fondest dream and your worst nightmare. She's sweet and sublimely submissive. She's dark and fully in charge. She's flirty yet mysterious. She promises safety in her arms but there's danger in her eyes. One look, one scent, one taste, one sigh and you're rock hard or dripping wet. She's sex incarnate.

Succubi are sexual vampires, women who steal the life force from their victim, but what a way to go! Some say succubi visit their victims in dreams; others say they seduce them in the flesh. Whether your succubus is a shape shifter, has permanent bat wings or wears a mini skirt; whether her victims are taken unawares, follow her with glee or scream bloody murder as they come, these stories are hot. As hell.

Get your copy from Amazon, Barnes and Noble, or your local brick and mortar bookstore.

D. L. King spends an inordinate amount of time reading and writing smut in her New York City apartment and postage stamp sized garden. Seductress: Erotic Tales of Immortal Desire is her fifth anthology with Cleis Press. She is the editor of The Harder She Comes: Butch/Femme Erotica, Carnal Machines: Steampunk Erotica, The Sweetest Kiss: Ravishing Vampire Erotica and the Lambda Literary Award Finalist, Where the Girls Are: Urban Lesbian Erotica.  She is also the editor of Spank! a Logical Lust anthology, Voyeur Eyes Only for Xcite Books and Spankalicious: Erotic Adventures in Spanking for Ravenous Romance. D. L. King is the publisher and editor of the erotica review site, Erotica Revealed, which has been referred to as the New York Times Book Review of Erotica.  The author of dozens of short stories, her work can be found in various editions of Best Lesbian Erotica, Best Women’s Erotica, The Mammoth Book of Best New Erotica, as well as such titles as Anything for You, Say Please, One Night Only, Power Play, Luscious, Hurts So Good, Fast Girls, Gotta Have It, and Please Ma’am, among others.  She is the author of two novels of female domination and male submission, The Melinoe Project and The Art of Melinoe.  Find out more at dlkingerotica.blogspot.com and dlkingerotica.com
Posted by Lisabet Sarai at 3:00 AM

Thanks so much for hosting my ramblings, Lisabet!

Hope the book does really well. And I do have a review copy on my tablet, which I hope to get to one of these days!