Snogs are back! Here's a quick kiss from my free M/M holiday story, Last Minute Gift.

After you're done here, slip on over to Victoria's to read her gourmet kiss, then follow the links to other authors' sexy offerings.

Oh, and I have an ongoing contest related to Last Minute Gift. Read the full story, then send me an email at contest - at - lisabetsarai.com with the subject line "Last Minute Gift". Tell me which character you like better, Scott or Flynn, and why. You could win a copy of my latest release Nasty Business.

Now, on with the snog! 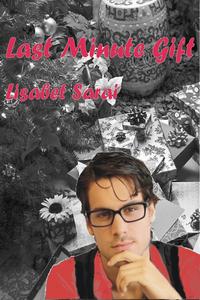 Scott scooted his seat closer to Flynn's. Now he did rest his hand on that broad, wool-clad shoulder. Flynn sighed and leaned into the touch. Scott could feel the hard muscle shifting under his palm. "It's okay, man. You can tell me." Genuine sympathy mingled with lust.

Flynn held his gaze for a long time, clearly weighing the wisdom of sharing his secrets with a stranger. Finally he shrugged. "I'm gay."

"I figured." Flynn flashed a brief smile that was swiftly eclipsed by pained embarrassment. "The trouble is I've never - never been fucked. I've tried it with a couple of guys, but I'm just too tight. Too much pain - I can't take it."

A virgin! Scott sent a little prayer winging toward the gods of gayness, thanking them for this holiday gift.
"My last lover broke up with me because of it. He said he needed a boy whose ass he could ream."

"What a bastard! If he's that selfish, you're better off without him."

"Maybe." Flynn's lips trembled. It was obvious he'd been hurt. "Anyway, I've been doing some research on the Internet, and everyone says you should use a plug to stretch yourself out." He glanced down at the silicone object in his palm. "But it just seems so - I don't know, so gross. So impersonal, to shove some inanimate object up your butt."

Scott had a sudden image of himself bending a naked Flynn over a hassock and twisting the toy into that tight, virgin pucker. He'd already been half hard; now his cock swelled to to the point that his trousers felt like a straight jacket. "I think you need some help, Flynn."

"I don't know. Maybe I just need to find a man who's satisfied even if he can't fuck me."

"Would that satisfy you, though?" Scott rose to his feet and took the empty bottle from Flynn's hand. "Let me tell you, nothing feels so good..." Reaching down, he pulled the other man up, into his arms, and took possession of Flynn's tempting mouth.

Given Flynn's previous demeanor, his kiss was surprisingly aggressive. He wrapped his wiry arms around Scott's chest, pulling him close, then slid his hands down to Scott's ass and dug his fingers into the denim-clad flesh. As he continued to ravage Scott's mouth, he ground his swollen groin against the aching lump inside Scott's trousers. His tongue darted in and out, thrusting like a small cock as he rubbed their bodies together. A few more minutes of this stimulation, Scott realized, and he'd shoot in his pants. That definitely was not how he wanted this scene to end.

"Uh - wait, slow down, Flynn!" With some difficulty, he eased himself out of the painter's embrace. "Don't you think we'd be more comfortable if we were wearing fewer clothes?"

"I wasn't objecting, was I? But let's do this right. Come back to Harry's office. It's not exactly luxury, but he's got a couch - and nobody's going to see us through the store windows and call the cops."

Want to read the rest of the story? Just click here!

Posted by Lisabet Sarai at 7:15 AM