The third book in my Steamwork Chronicles is out soon, on January 15th, and this is the story of Dankyo, my Dom who emerged from Iron Dominance. I had never intended for that to happen, or at least not until I wrote the end of that book. I was even surprised at how many readers wanted to see his story told. This made it hard for me to write! I blame all you readers for my lack of fingers. I’m sure I gnawed a few down to the bone.

Dankyo was not an easy man for me to understand. To make a good story, I needed to know his weaknesses, and he wouldn’t cough up and reveal them for months and months. I persevered. I even found the perfect woman to suit his damn stubborn and introverted temperament. She’s stubborn too, a bit of a steampunk geek, yes there is such a thing, and yet she’s also craving the dominance of a man like Dankyo.

They have some nice fiery encounters, such as this one. 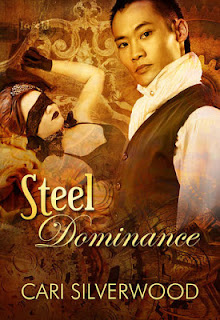 The door clicked shut behind Sofia, and Dankyo strode past. He sat on the bed, making it dip and creak, and crossed his legs, showing black socks above his black shoes. As if she wasn’t ready to strangle, emasculate, and claw him to pieces, he unlatched his suitcase, pulled out a revolver, and proceeded to check its mechanisms.

The pistol made her pause only a second. He wasn’t going to shoot her. “If that’s for me to kill you, I don’t need it. My fingernails will do.”

He grunted and unloaded, then reloaded the gun.

Wrong, wrong, wrong. Alarms rang in her head. “Um…” She almost didn’t want the answer. “Where are you sleeping?”

“Here.” He raised one eyebrow. “I’m here. You are there.” He pointed at the bedroll.

When she only frowned and pulled a face, he added. “Again, you are pretending to be a slave. I can’t do otherwise. There’s no other room in any case. And there are servants and passengers here. I trust no one.”

So she had to sleep in the same room as him? As this gargantuan man with muscles like rocks and a body as wide as a river barge? Surreptitiously, she flicked an assessing look over Dankyo. He was nicely built. Her mother would no doubt approve. God. Snap out of it. Stop drooling. My boyfriends, when I have them, are far less…dangerous than this.

A brilliant researcher, Sofia must unravel the ancient puzzle of the Clockwork Warrior or her career will be in tatters. Yet the tomb of the warrior is in the dangerous city of Byzantium, inside the harem of the Emperor. She knew she’d have to pose as a slave—but not that her “owner” would be the incredibly bossy, gorgeous bodyguard she’s been assigned.

A life of military duty has left Dankyo unprepared for Sofia. He’s never met a woman quite like this. She’s smart and beautiful, and she’s something that he’s finding almost irresistible—despite the way she fights against masquerading as his slave, she’s submissive right down to the bottom of her soul. And that’s bringing out every dominant instinct in his body.

But even as he realizes she’s captured his heart, the city explodes into madness. Surviving seems impossible. Can love and a Dom who will never give up overcome sheer bloody-minded evil?

And here is a little sexiness to show that they do have chemistry between them as well as pistols, napalm, and hissy fits (Do Doms have hissy fits?).

This excerpt is set on the airship, Princess Kay.

A loudspeaker came on. “Time for disembarkation in twenty minutes. Passengers are advised to have their baggage in order.”

People either side of them moved away, and when only a few were left and Dankyo hadn’t said a word, she made to follow them. He stopped her. His hands tightened on her neck, and he shifted behind her until his lower body pressed into her buttocks.

Then he nipped her ear and spoke in a warm, rumbling tenor. His breath carried his words in deep to curl inside her mind and paralyze her with their power.

“This is Byzantium, where slaves do as their Masters bid them. Where no one will know if you surrender yourself to me. Not your friends; not your family.” As he spoke, he slid one hand down her front, following the curve of her breast, then lower, until the flat of his hand rested on her belly. He pulled her back against him, gentle but sure.

“Sofia, will you let me take you to the edge and beyond?”

COMMENT below to be in the draw to win an eBook copy of Steel Dominance.

You can increase your chances of winning by also commenting on my Release Party post on the Guilty Pleasures Book Review site on the 16th January.

OR on Shay McLean’s site at

I’ll be pooling together all the comments to pick the winner of the book.

Link to my books page on my website where I will put buylinks such as one to Amazon, and a link to a longer excerpt:

Thanks for having me as guest, Lisabet. I'm slow off the mark spreading the word due to being at the beach on hols right now :)

I've been wanting to read Dankyo's story for quite a while now. Thanks for the post and excerpt.

Just to clarify, Shay will be hosting me tomorrow, Jan 15th, US time. So that post won't be up as yet.

Good to hear that Becki. You're one of those who made me chew my fingers! But thank you, I'm very pleased with how this story unfolded. I'm waiting nervously now to see what my readers think.

Welcome back to Beyond Romance. I love your cover! And of course your chosen genre is dear to my heart...

Your books are so good. Look forward to reading them.

Sounds Like a great Book and series. Must go Add them to My Goodreads WL/TBR.
Ladystyx

Oh my! Cari, I've got at least the first on my TBR already, but this one sound amazing! Can't wait!! Thanks for the peek today!

If you want to read this one first, I won't complain. Some of the people are from earlier books but truly, it can be read as a standalone story. And it's the best one! LOL I always say that of my latest baby.

But it is the most epic plot I've done perhaps... the zombie almost-apocalyptic plot in Lust Plague (book 2) came close in grand plot craziness.

Lisabet, I had thought steampunk was one of your favorite genres. I saw you'd written a few steampunk books :)

Thank you for the fantastic excerpt. I love the cover. Looks awesome.
Thanks also for the great contest.

Awesome excerpt. Can't wait to read this one.
Yvette
yratpatrol@aol.com

Cant wait to read this book!!! Thanks for the giveaway!
lauratroxelatyahoodotcom

I'm very fond of your book cover as well! I think I drooled over the excerpt. I enjoyed just reading the introduction. Actually, I was introduced to Lisabet's writing via a steampunk conglomeration almost two years ago!

Drooling is good. lol
Thank you Julianna. There's a great new steampunk section at Coffeetime Romance too now. I hope you've gotten on there Lisabet? If not go tell them about all your books!

Congrats! I have some reading to do now. Great excerpt.
Mel
bournmelissa at hotmail dot com

Congrats on the release! The more I read your excerpts the more I am being pulled into steampunk. It's exciting and imaginative, just what I need to escape into a book :)

Oh this sounds like a great read, I can't wait to check it out!

The winner from the pool of comments on the three blogs is Julianna from here.
Congratulations, Julianna! I'll be emailing you soon.