Revenge of the Mad Scientist

[Another tour post for you today, this time from Lara Nance's delicious steampunk romance, Revenge of the Mad Scientist.  ~ Lisabet] 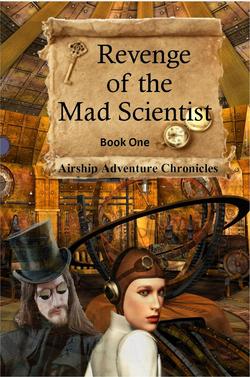 When Lady Arabella Trunkett’s father, the High Lord Minister of Urbannia is kidnapped, all clues point to the mysterious country of Gandiss and the world is thrown into political upheaval.

Arabella is convinced the more sinister nation of Carabarras is to blame, urged on by a mad scientist seeking revenge. So, she sets out on a perilous airship journey across a variety of exotic locales to save him, and halt the potential world war.

But airship pirates, secret assassins and slave traders aren’t her only trials. The fickle hand of fate has made the captain of the only airship available for charter, the man who left her at the altar. For eight years she's wished him dead. Now he's her only hope.

Another scream sounded and then another. A group of people blocked her view and she didn’t hesitate in pushing them aside. She gasped when she reached a body sprawled on the floor and noted a trail of red blood tracking from a side room. She recognized the injured man as Conrad Bellows, her father’s assistant. Horrified, her champagne glass slipped from her fingers and shattered on the marble.

She pushed another man out of her way. What the hell was wrong with everyone standing around like statues while a man needed help? She knelt at Conrad's side. A knife protruded from his back but when she put her fingers on his neck she found him still alive, thank God. He struggled to his side and blinked as he looked up at her.

“Who is gone, Conrad?” She put a hand on his shoulder as panic shot through her.

“Ahh, all in black, don’t know…” He closed his eyes and then slumped on the floor, unconscious.

Belle sucked in a sharp breath. She jumped to her feet and spun around. “Someone call for a doctor and help Mr. Bellows. Where’s my father?”