More Than Just the Blues

Thank you Lisabet for hosting me today. I’d like to talk about a subject that is very personal, one that I felt so strongly about that I wrote about it in my latest release From the Depths.

Depression…far from an easy subject to talk about, especially for someone who is suffering from it. It was hard for me to come to terms that I suffer from depression. I just thought it was stress and anxiety from day to day life, and that the times I’d feel all sad and like life was not worth living was something that would just go away. What is worse is not knowing who you can turn to to talk about what you’re going through. I’d been dealing with this on my own for most of my life. It wasn’t until 2002 that I finally had enough. I found a pamphlet that had contact information on it for local counseling groups. I contacted one and was assigned a counselor. It’s hard to find someone to talk to and it takes time to establish a report with a counselor. I went through several counselors to find someone that I feel comfortable with.

I went to some support groups. One of the common denominators that was brought up was how frustrating it is to try to get others to understand this is not something that is all in your head. This isn’t the blues and that all you need to do is snap out of it or decide that you’re not going to feel this way. One guy’s own counselor wasn’t being supportive either. I told him he should get another counselor, it’s hard especially if you don’t have health insurance. They tend to just stick you with someone and if you want to change to someone else they will say that you need to communicate more with the one you have and tell them what you need. That doesn’t ways work. Believe me I’ve tried it, I left one counselor because she seemed more interested in adjusting her air conditioning, using a remote control on the unit, than listening to what I had to say. It felt like I was bothering her or she had better things to do…uh, not what you’re getting paid for lady.

I don’t have any easy answers as to how you’re supposed to talk to someone who is depressed. Every depressed person is different, the only thing I can say is to try to deal with the person with compassion, understanding and most importantly, patience. And don’t try to belittle their condition by making light of it.

Two things that are currently helping me is a book on cognitive therapy and my weekly meditation class.

They say that in writing you should write what you know, or at least do that some of the time. And I thought it was finally time to write something very personal to me and that was how my latest book From the Depths came into being. It was not an easy book to write. I debated on how much I wanted to expose. I look at it now and think that either I exposed too much or not enough. I could have gone into some of the very dark places that my mind has taken me, but then I was concerned about not being able to come out of it after the writing was done. I might revisit this topic again and perhaps go to those dark places and peel back the layers, much like an onion, into a condition that many have but is hardly addressed.

Here is a blurb and excerpt from my book:

To the world, Harry Goldberg appears to be a ordinary, happy-go-lucky man. He has a great job working at Nosh Deli on Long Island. His co-workers and customers love him. But Harry has a secret--he suffers from depression. No one understands what it's like to live life on the edge and not to be able to let anyone know for fear of driving them away. That is how Harry has led his life, alone except for his faithful cat. But things change when a new delivery man shows up at the deli; one that he finds himself attracted to. But there is no one who can love someone with so much emotional baggage like him--is there? 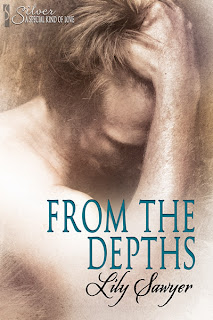 Harry had a wonderful job; he worked at a deli on Long Island. He loved to watch the looks customers gave him when he served them his special mile-high sandwich. Despite the huge piles of hot pastrami and corned beef on rye with a pickle and coleslaw on the side, they somehow left a clean plate.

The people around Harry told him that he was a likeable kind of guy with a great sense of humor. All his co-workers loved him. Truth was, he had them all fooled. When he left the deli at the end of the day he went home to an empty apartment; his only company, aside from assorted houseplants, was his cat. Tom was a grey and white shorthair Harry had rescued from the local pound. No one knew about Harry's lonely existence, just like they didn't know he suffered with depression. The only ones who knew, aside from his immediate family, were his counselor and a support group he went to from time to time.

Most people thought it was just the blues; at least that was what his parents thought at first. His mom was the worst. When Harry was fifteen, he'd buried himself in his bed and wouldn't come out. She kept telling him stop being lazy, get his ass out of bed, and snap out of it.

Unfortunately, they didn't understand what it was like to feel as he did. No one knew how much Harry wanted to be normal; he didn't want anyone's pity. No one could know the deep pain he felt. Some days it got so bad he just wanted to lie down, go to sleep, and never wake up.


Nicholas could never stand being cooped up inside some stuffy office building. Nope, that was never going to happen. So when his uncle offered Nicholas a job with his delivery company after he graduated high school, he jumped at the chance. That was almost ten years ago--driving a truck was in his blood now.

Stern's trucking specialized in delivering kosher food to all the Jewish delis and kosher markets on Long Island and in the five boroughs of New York City.

He checked the manifest; there was a new restaurant on the list. He'd been to Carle Place before but never to Nosh Deli. But a job was a job. He'd done so many deliveries he could do them in his sleep.

He loaded up his truck in Queens Village and headed east to Long Island. He took the local roads, completely avoiding the Long Island Expressway.


Harry was handling the lunch-hour-rush crowd. He'd lost count of how many pastrami and corned beef sandwiches he'd made and how much homemade coleslaw and potato salad he'd scooped out onto the plates.

"Can I have a chicken on whole wheat bread, please?" Harry stopped his automaton-like movements, taking notice of the customer behind the voice--a blonde woman who appeared to be in her thirties, dressed in business attire.

"Bless you. Thanks for breaking the monotony."

She laughed. "You must get tired of the same old orders every day."

Harry was on the receiving end of that brilliant smile. The woman seemed to be flirting with him. He had to admit she was an attractive woman. He noticed there was no ring on her left hand. There was one problem, though--Harry was gay. He'd known that girls didn't do anything for him that way since he was fourteen. It was one more thing his mother had nagged him about--dating women--until he came out to his parents. He couldn't say they were thrilled, but at least they didn't throw him out of the house. They just didn't talk about it. Besides, Harry hardly ever went out. He had one experimental encounter with a buddy in high school. They had given each other a hand job and that was that.

Harry's self-esteem was in the basement. Who in their right mind would want to date a guy who was a killjoy? Depression robbed Harry of being able to really enjoy life. He was glad no one at work was aware of the sad sack in their midst--and no one would find out if he could help it.

He buried himself in work, fixing orders for people like the woman who stood before him--he wouldn't let anyone get too close.

Lily Sawyer has to credit her late mother for her interest in reading and writing. She used to take her to library and opened up to her the world of books. She took a writing class in an adult enrichment program and got hooked. She started off writing stories set in various fandoms she was interested in like Star Trek and Brokeback Mountain. After getting some encouragement from family members and friends, she finally decided it was time to write her own original stories. Lily recently returned to drawing and was in an art class. Also loves to garden and loves everything about nature. Including going to the beach and looking up at the stars.

Thank you, Lily, for a very brave and honest blog. *hugs*

Thanks so much for being my guest. I've had my own experiences with psychiatric illness (though not depression) and I know how hard it can upend your life. I'm really glad you wrote this book - and that you've come to promote it here.

What a moving excerpt! I know just how Harry feels. I look forward to reading this, thank,you!

Thank you for your words. Harry does what so many of us do--put on that happy-go-lucky air--so that no one knows what's happening inside. It's hard to deal with when no one understands. I look forward to reading From the Depths.

Good post, Lily--your way of describing the issue is very straightforward and sympathetic but not cloying. Your point about finding a counselor who works is important--when your ego is fragile it's hard not to accept whatever person they give you, but an approach that works for one doesn't necessarily work for another. Meredith

Great post, Lily. Thanks for sharing. "From the Depths" sounds intriguing. :-)