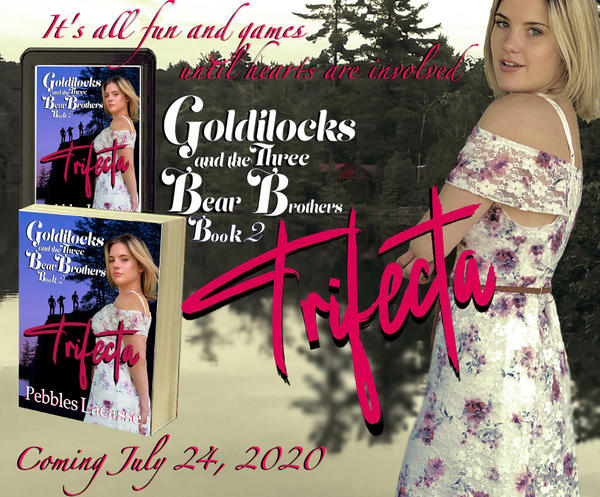 Goldilocks is moving into the Bear house. While Bash is away at school, he’s entrusting his brothers to satisfy all her needs.

The townsfolk have labeled her a whore for associating with the bad boy Bear brothers. She fears her father’s disappointment most. Her immoral behaviour may prove too much for the man’s failing health.

Mack’s new girlfriend has Goldilocks questioning why Bash hasn’t mentioned her. She wonders what other secrets the brothers are keeping.

A dominant Patch and gentle Mack ravish her body with their wild sexuality, but what happens when the night stills and romance blooms?

Will Bash return home to discover Goldie’s heart belongs to another?

Note: Book 1 is part of the Torrid Tales Anthology. Book 2 follows as a standalone title. 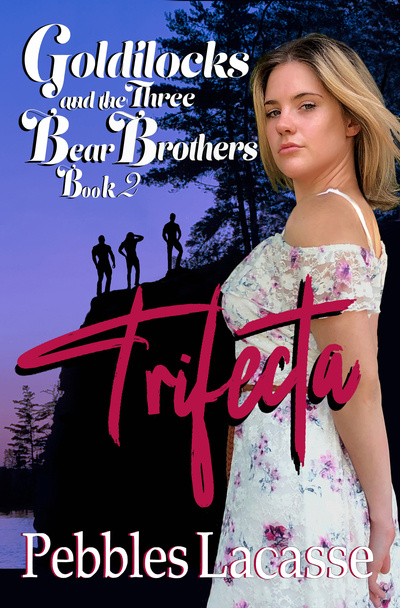 Patch groans as I turn to walk past Mack and into the kitchen to put the bowls away. For such a big man, Patch moves stealthily. I see him coming in my peripheral and spin, putting my hands up to stop him. I try to back away, but my high-pitched laughter has me moving too slowly. He bends forward and scoops me over his shoulder. He hangs onto the back of my knees while he turns one way, then the other as he dumps the bowl’s contents into the trash and sets them in the sink.

I’m laughing harder now. He cracks my ass with his lumberjack-sized hand. Both ass cheeks heat instantly and my pussy twitches. I grab onto the waistband of his denim pants and try to lift my face off his back, but I’m laughing too hard to hold the position for more than a few seconds. He cracks me again. I try to cover my ass with my right hand, but somehow, he grasps my wrist and gives me two more. My ass is on fire!

I fucking love this!

Patch carries me into his bedroom and kicks the door shut with his foot. Before putting me down, he steps out of his slippers, undoes his pants and lets them fall to the floor, kicking them to the side. He tosses me onto my back on the bed. He’s on me, between my legs before the second bounce.

His mouth presses to mine with passion behind it. I could disappear into this man if I let myself. It would be as simple as closing my eyes and pretending he’s Bash. I miss him so much.

I whisper, “Tonight, you can pretend I am her.”

His expression softens. It’s as if he’s suddenly lost ten years of stress off his face. He nods slowly, brushing his thumb along my lips. The dominant man inside him is shadowed by his kinder side.

His voice flows with a deep whisper. “If we keep our eyes closed, we can pretend. This isn’t wrong, is it?”

My fingertips trail down his forehead and cheek. “We’ll keep our eyes closed. It won’t mean anything between you and me, other than two bodies pleasing each other while holding the image of someone else.”

“Agreed. Thank you,” he whispers before his lips press tenderly to mine.

He’s passionate and romancing her with his kisses. The otherwise rough, workingman’s hands seem softer than silk as they brush along my skin. He cups my breast, kissing down my neck with slow, deliberate pecks. My fingers weave into his short, dark hair as his lips surround my areola. As his tongue warms and teases my nipple, the full weight of his chest presses onto my pelvis, pinning me to the bed.

He rocks his body. Between the nipple play and the pressure on my clitoris, I’m moaning between deep breaths. His gentle hands wrap around both breasts, pushing them closer together so he can alternate between them quickly, nipping and flicking until my womanhood drips with need.

I’m lost in his tenderness. His sensual movements are as smooth as a ballet dancer. My hands slide along the bed, down beside my butt until our fingers weave together. An easy moan slips from his throat.

His tongue laps at my folds, sucking and flicking at my clitoris until I’m on the edge of letting myself fall into the abyss of glory when he suddenly stops. I groan my disappointment, but his mouth is on mine quickly, suffocating my protest. His left elbow rests beside my head while his right hand caresses my thigh.

With one quick movement, he’s deep inside me. Both of us gasp into each other’s mouths. His halted breath proves his pleasure. When my hips lift to meet his slow, deliberate thrusts, he pushes against my cervix, causing shock waves to ripple through me. The way our bodies mesh so perfectly, anyone watching would believe us to be deeply in love with each other.

He’s building me slowly toward orgasm. Nobody has ever moved this expertly with me, including him. I’m slipping away, becoming light and yet so heavy. I’m warm, cradled, and desired. I know it’s not me he’s dreaming of, but how lucky I would be if I were. She is a fool to have left a man who loves her this much. I can feel his heart breaking for her. He does not aim his compassion at me. I’ll be wise to keep that in mind.

In a flash, he rolls us both, our mouths never separating. I’m above him, straddling his pelvis, his rock-hard cock buried deep into me. His massive hands grip firmly on either side of my waist. I sit up and try to buck but he won’t allow me to move. His eyelids are closed, mouth open, chest heaving.

The weather outside pelts against the window creating a song that mirrors the moment between us; deafeningly peaceful, serene but treacherous, absolutely flawless with the possibility of disaster. At any moment, either of us could forget who we’re connected to and let our hearts break wide open.

I glance at him but only for a second. I cannot allow myself the pleasure of falling deeper under his spell. He watches me. His teeth are clenched, eyes seem darker, and his face has taken back those years he had lost earlier.

His Adam’s Apple bobs. “I’m going to fuck you hard now because I can’t do this with you.” I nod, knowing how close we came to bonding with more than just our bodies.

“Should I make you work for it?” I reply with a sassy tone.

His nostrils flare. “If you’re up for it.”

Before he can react, I slap his face and then fling my leg over him, attempting to escape his wrath. He growls like a madman, grasping my ankle just as I’m about to hop off the bed. I topple forward, catching myself before I hit the floor. I pull at the rug and kick, trying to yank my ankle out of his hand, but his mighty grip is inescapable. I kick with my other leg, hitting him in the chest, forcing him to let go. We both laugh; mine brought on with a hint of fear while the battle enthralls him.

I run to the door while he leaps off the bed and strides toward me. Quickly, I whip open the door and run through, slamming it behind me. He thuds against the wood and growls like a wild beast. He gives me time to hide while calling out to me from behind the closed door. “Goldilocks… I’m coming to get you!”

I run out the front door, closing it quietly behind me. It’s damn cold out here and dark as hell. I can’t see my hand in front of my face unless the lightning sparks, momentarily blinding me with the darkened shapes of the surrounding objects. I feel like someone is taking pictures of me and I keep looking at the flash.

I’m careful not to make any noise, but I’m unsuccessful when I bump into the table, knocking an empty beer can onto the wooden porch. I shuffle my feet, waiting for the lightning to light a path to the other side of the porch. It’s too dangerous to slip into the thick of the forest. If a tree falls, it could kill me.

I hear a sound behind me and spin to look just as a bolt of lightning lights up the entire porch. Patch is standing a foot away from me. My giddy yet terrified shriek seems to fizzle out between the fat raindrops as if it didn’t exist. I spin to run but he has my hair in his fist.

His voice sounds distant, drowned by the sheets of rain. “I found you, bitch! You’re in trouble now, whore!” He’s naked, his cock harder and thicker than I’ve ever seen it. His huge hand grabs my throat, pulling me toward his face. “Slap me, will you? You won’t do that again.”

A tinge of fear trickles into my laughter when his hand tightens. Blood rushes to my face and it’s harder to breathe. He glares fiercer with each bolt of lightning. It’s terrifying, sexy, and holy fuck, I want him!

Where to find me:

I love the cover. Your Goldie is clearly a naughty young woman.