Nothing he won’t do to keep his mate safe... #shifters #MMRomance #pnr @creestorm79 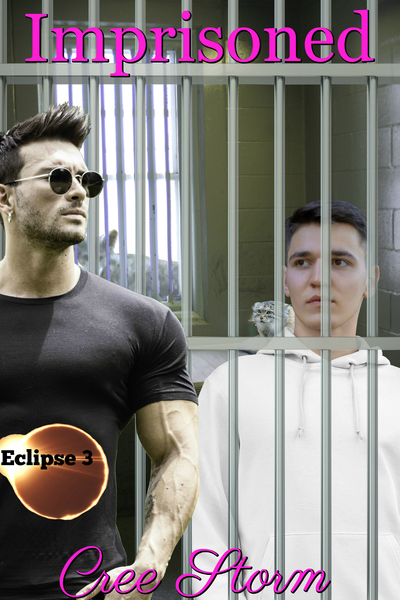 Jailed for no reason he knows or understands, Kurby has decided it’s easier to live in hiding as a Pallas’s cat than it would ever be as a man in the council prison. That is until Councilman Elija Hamilton walks into his cell.

Finding his mate in a prison cell is not something he ever expected but damned if he was going to refuse the man. Kurby was his and no matter what he would have him.

When Kurby’s life is threatened there is nothing Elija wouldn’t do to keep his mate safe even if it meant unleashing his Chupacabra.

“I know, sweet kitty and I wish there was something I could do to take that feeling away, but only time will do that. However, I will be right here with you...holding you...drying your tears and loving you any way I can until that day comes and beyond.” Elija whispered kissing the top of Kurby’s head.

Kurby pulled back and looked at Elija with wide eyes. “Lo...loving me?”

Elija smiled and brushed Kurby’s bangs back, “Of course loving you. Gods, Kurby I know it seems fast for you, but for me...I was raised by shifters. I knew I loved you the moment I set eyes on you and in the days we’ve been together I have fallen deeper and deeper in love with you.”

Shaking his head, Elija softly kissed his mate. “Kurby, I don’t expect you to say anything. It’s fine. I understand and I agreed to give you time and I plan on doing just that. However, I will also be honest with you. I will never lie or hold anything back...unless it’s a council thing then I might not have a choice. Otherwise, I am an open book to you and that includes me telling you that I love you.”

“How can you? You don’t even know me. Yes, we’ve spent some time together, but...but...” Kurby licked his lips, rushing to say, “It has to be that pull thingy. The one that makes us want each other to begin with.”

“Kurby, listen to me. A mate bond doesn’t force us to mate. It can’t. Even the gods knew this. That’s why they said our gifts transfer when it’s time for us to find our mate and have that time to bond. If we don’t bond then we will remain whatever our mate’s form is...even if that’s human. Yes, our bond tells us that you are perfect for me. It tells me that I will want no other like I want you and yes, it will encourage me to sink my teeth into your neck and make you mine. However, it doesn’t force me to love you. You did that.”

“How did I do that?” Kurby asked curiously.

Elija snorted, “By being you. How else? It has nothing to do with how sexy you are...even if I think you are the sexiest man I have ever set eyes on. Kurby, your strength in heart and spirit as well as your intelligence gives me the shivers and makes my cock so hard I hurt. The way you are with the children here...”

Elija smiled at Kurby’s surprised look and continued. “Yes, I’ve seen you with them. In and out of human form you are playing with them and making them laugh and if one of them are hurt your cat will cuddle up with them and help take away their tears. The way you worry about your family and are willing to do anything to help them...even give up your own family. Gods, Kurby, to be willing to sacrifice everything for someone you love the way you did...it’s not something I’ve seen much of in my life. To be mated to a man so willing to give everything to those he loves...it’s just...how the hell couldn’t I love you?”

Elija cupped the side of Kurby’s face and then leaned in and gave his mate another soft kiss, whispering, “I already told you it’s okay, sweet kitty. I just refuse to hold my feelings in. There’s no rush. Now how about we give your parents a call?”

I was born in Fort Knox, Kentucky. I’m a military brat that travelled a bit overseas and throughout many parts of the United States. I finally settled in Las Cruces, New Mexico, where I eventually got married and then divorced. I was blessed with two fantastic sons.

As they grew up and became young men chasing their dreams, I felt that maybe now was the time for me to do the same. That’s when I started writing. Never in a million years did I expect to meet the most wonderful man in the world, move to Quebec, Canada, and get married. However, that is exactly what happened.

JP has introduced me to things like; canoeing, snowmobiling, four wheeling, and has taken me to some of the most beautiful locations. Ones that I had only ever seen on a computer or read about in books. I may miss my mountains and my boys, but have discovered that when you work towards your dreams, the future can be one filled with happiness and love. My boys are only a plane ride away, and Skype is a glorious thing. So I say, on to my next adventure…don’t be shocked to find it in one of my books.