Review Tuesday: Walk on the Wild Side by @Archer_Larry #swinging #lesbian #ReviewTuesday 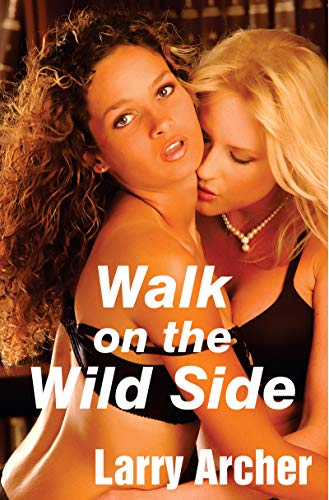 Co-workers Sandy and Kim are desperate. They have done everything they can think of to get their husbands to pay them some sexual attention. They’ve lost weight, purchased new, provocative wardrobes, tried to arrange intimate times together, to no avail. Sandy’s husband is a workaholic, while Kim’s spouse seems to view her as nothing more than his personal maid.

Soon they’re happily competing for the sexual attention of club owner Larry as well as the shy but hunky security guard Steve. Foxy continues to guide them in their increasingly outrageous explorations of the dark side, though to be honest, they need very little encouragement!

Walk on the Wild Side is the most recent book in Mr. Archer’s series about swingers Foxy and Larry and their no-holds, no-holes, barred strip club. Anyone who follows my blog will know that I’m quite a fan of Larry’s smutty tales, to the point that I’ve set five of my own books in the same fictional world. I thought that Walk on the Wild Side might well be the best installment yet. The first half, in particular, in addition to being sexy as hell, is also really well structured. Sandy and Kim are distinctive, sympathetic characters. Actually, I feel that the book’s subtitle, which describes them as “bored, cheating housewives” is quite unfair. (For one thing, they’re not housewives, but career women!) They’re enthusiastic about their journey over to the dark side, but the two women approach the prospect somewhat differently. Kim actually starts to fall in love with Steve – though of course that doesn’t stop her from doing the nasty with practically every other woman and man in the book.

This book gives a more central role to Foxy than many of the previous titles I’ve read. She’s the ringmaster (or perhaps ring-mistress) for everyone’s escapades. Although she’s still an insatiable slut (as are most of the other characters), she comes across as more intelligent, intuitive and responsible than in some of Larry’s other books. At least, that was my impression.

And I do wish Larry (the author) would learn how to use question marks correctly!

Overall, though, I really enjoyed Walk on the Wild Side. If you like outrageous, juicy, guilt-less sex with a wide range of partners, you will, too.

Lisabet, I must admit that the "bored, cheating housewives" is an attempt at improving my SEO chances at prospective readers searching for related terms. As a staunch supporter of the #MeToo movement, both Foxy and I believe that "sex sells" and doesn't have to be in conflict with the role of women in society.

Other than being a Luddite, Foxy is an intelligent woman and I didn't realize that I portrayed her as other than bright. I'll try to better with her. Maybe I can have her start wearing a mortar board? Note the question mark.

Sorry about the question marks but I'm genetically predisposed at poor English as that's a basic trait of an engineer.

Thanks for liking the story as I consider that high praise from an author that I admire. I have fun with Foxy and Larry getting to experience a lot of things that the world today has closed off from most people. We've always enjoyed experimenting and expanding our boundaries.

I didn't mean to imply that Foxy has seemed stupid in your other books. However, she often seems to be a creature of impulse. In this book, she seemed to be in a more analytical mode. Also she comes across as being very mature - although I'm not sure whether she's actually older or younger than Sandy and Kim. Certainly she has the wisdom of experience!