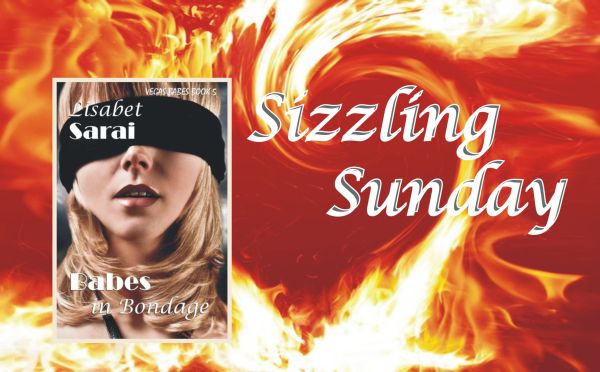 Fancy a bit of Sunday shibari? I’ve got another exclusive excerpt for you today, from my new release Babes in Bondage. Enjoy!

Master Shark swept his eyes over her curves, an appreciative smile on his lips. She straightened her spine, elevating her ample breasts. Her black satin brassiere couldn’t hide her hugely erect nipples. Giulia didn’t care. A quick glance at Shark’s trousers made it clear that he was not immune to her charms.

After a pregnant instant, he continued his lecture. “Shibari is often practiced on a naked subject. The contrast of rough rope and smooth skin is visually attractive, while the friction can be highly arousing. Beginners, though, often start with a clothed ‘rope bunny’, to avoid becoming distracted.” Some of the audience giggled. “If the subject does wear any clothing, it should be form fitting, like Giulia’s leggings. Otherwise it will spoil the artistic effect.”

Leaving Giulia half-naked near the front of the stage, he went to fetch supplies from some shelves at the back. The curious stares from the crowd only made her hotter. I can do this, she told herself. I want to do this.

“Today I’m going to show you Hisha Kerada —the classic diamond tie, sometimes called a ‘rope dress’. You’ve probably seen pictures. Actually, it’s easier than it looks.” He held up a fat bundle of red-dyed rope. “You’ll need about thirty feet of quarter inch diameter hemp or jute rope.” He waved his other hand, which held something metallic. “And be sure you have a good quality pair of medical scissors available. Just in case of emergencies.”

He rested a hand on her shoulder. “Are you ready?” he asked, his voice kind but with an undertone of steel.

“Oh, I will, Miss Giulia. Just relax for now. Stand with your arms spread, as if you wanted to hug the audience.” There were more chuckles. “But try not to tense your muscles. That’s right.”

“We begin by doubling the rope in the middle, with the doubled part hanging down her back and the two strands draped over her shoulders.” As he illustrated his instructions, he touched her body only when necessary. That didn’t make the contact any less intimate. She’d given herself to this man, to be made into an object of desire. She’d relinquished her will; she was no more than the canvas for his art. The knowledge intoxicated her, spurring her to even higher levels of arousal.

“Now we fashion a loop at the back, between her shoulder blades—turn around, Giulia, so they can see, that’s right. We bring together the strands in the front —again, please—and make a series of equally spaced overhand knots: one at her throat, just below the collar bone; one between her lovely breasts—”

Her nipples strained against her bra, screaming, Touch me! Tweak me! His clever fingers lingered for a moment near her tits, and she knew he was tempted, but Dom that he was, he had unfaltering self-control. He created two more knots down her midline, one at her waist, one just above her navel. She struggled to remain still and not squirm in the direction of his fingers.

“Now we run the two strands up between her legs and up her spine. At this point, if you like, you can create an optional ‘happy knot’, like this…” Shark tied the paired lines together again, near the gap between her thighs, then pulled it up tight between her legs. Giulia gasped. The last knot was perfectly positioned to put pressure on her already throbbing clit. Each time he manipulated the rope, the friction became more intense. Meanwhile, the rope settled deep into her ass cleft, rubbing against her anus through the stretchy cloth of her leggings.

“Don’t squirm, Giulia. That’s a good girl…” The Dom continued his narration as he fed the rope ends through the loop between her shoulder blades, then under her arms and around to the front from either side. He slipped them between two strands, below the knot at her throat and above the knot between her tits, then drew them around to the back once more, pulling tight to make the first “diamond”.

Oh God! The hemp bit into the soft flesh above her breasts, not painful, but inescapable. He repeated the strategy, wrapping the rope below her tits this time, inserting the ends between the second and third knots, and pulling them to the back to make a second diamond. Her breasts were now captured in a vise of rope. The taut bonds made her flesh bulge; her nipples were so swollen she thought they’d explode. Meanwhile every tiny motion stimulated her raging clitoris and pushed her inexorably closer to climax.

Giulia didn’t want to come on stage, the way Jen had. That would just be too embarrassing. Yet as Master Shark continued to dress her in his scarlet cords, she wondered if she had any choice. He wasn’t teasing her, not directly. He touched her only in the most utilitarian way. Still with every loop and knot, he took more complete control of her body—and her mind. She floated, paradoxically relaxed despite the erotic tension singing through her limbs, waiting for his next command—turning to show the audience her rope-split buttocks, turning again to display her trussed up tits, every movement pushing the happy knot deeper into her throbbing cunt.