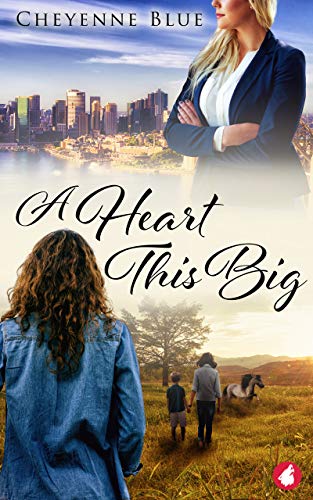 A Heart This Big by Cheyenne Blue
Ylva Press, 2019

Nina and Leigh might as well live on different planets.

Nina spends her dusty days working at her farm on the edge of Sydney and caring for her twelve year old daughter Phoebe. Bequeathed to her by the grandparents who raised her, Banksia Farm is both a beloved haven and a heavy responsibility. Nina has opened the farm to local kids and adults, who come to visit, volunteer, meet the animals and enjoy an experience increasingly rare in their urbanized existence. She welcomes everyone, but especially those special children who most need patience, support and connection to the natural world.

Leigh is the youngest partner in a prestigious downtown Sydney law firm. A dedicated workaholic who chose the law so she could help people solve their problems, Leigh wears designer clothing, drives a BMW and lives in a pricey condo overlooking the harbor. Her social life is as meticulously ordered as her professional one; her dates with women in her own class usually involve fancy dinner and wine at an upscale restaurant, occasionally followed by empty sexual pleasure. Many nights, though, Leigh spends alone.

Nina’s and Leigh’s lives collide when a child has accident while riding at Banksia and his family sues Nina for damages. Nina barges into Leigh’s well-ordered existence, insisting that, as the best insurance litigator in the business, Leigh should take on her case pro bono. Against her better judgment, Leigh agrees, at least partly because she finds Nina both attractive and admirable.

Leigh’s first visit to Banksia is a bit of a disaster, but she soon becomes comfortable in the low-key, low-budget community that Nina has nurtured. Nina turns out to be equally drawn to her fashionable, intelligent legal counsel. However, the rules are quite clear; lawyers may not get emotionally or sexually involved with their clients.

Romance, ultimately, is about feeling good. I have to say that A Heart This Big left me with a warm glow. The story is, like many romances, fairly predictable (though Ms. Blue does throw in a twist or two), but the characters and the setting are what’s important in this novel. Both Nina and Leigh feel solid and real – Nina perhaps a bit more than Leigh, but that may be partly because Leigh’s world is so foreign to me. I believed in both their love and their pain. The minor characters are equally well-drawn – especially the sometimes surly and angst-ridden pre-teen Phoebe and Grizz, Leigh’s wise and idiosyncratic paralegal.

Meanwhile, Banksia Farm is portrayed in such loving detail that I think Ms. Blue must have a real life model. The contrast between Leigh’s rather sterile world and the fertile, messy farm environment comes through strongly. To Leigh’s credit, she doesn’t run away from the dirt, the physical labor, or the sometimes peculiar folk who frequent the farm. With gentle Nina’s guidance, she learns to love them.

One other aspect of this novel made me want to celebrate: the quiet, unspectacular acceptance of same-sex relationships by every one of the characters (even the villain). There are barriers to Nina’s and Leigh’s relationship, but sexual identity is not one of them. Nobody bats an eyelash when Leigh moves in with Nina. Totally comfortable, Phoebe gleefully introduces them as her “mums”. The story includes many straight people, including some warm-hearted male characters, which I appreciate. This is not a lesbians-only world, as is the case in some lesbian romance. But it’s a world where people are free to love whomever they choose – a world we’re hopefully getting closer to all the time.

Overall, I very much enjoyed A Heart This Big. It left me feeling as though I wanted to go out and hug someone.