Welcome back to Beyond Romance, M.T.! Can you tell my readers a bit about the genesis of the book? Where did you get the idea? Do you have personal experience with the worlds of Article 15?

There was a series of movies in the 80s & 90s which featured very strong, sensual, and, shall we say, somewhat morally questionable women. Lawrence Kasdan, Ron Dahl, and Joe Esterhas led us down dark paths fraught with lustful terror in Body Heat, The Last Seduction and Basic Instinct. I loved those movies and those characters, so a big thank you to Kathleen Turner, Linda Fiorentino and Sharon Stone for the opening line of Article 15:

“She was one in a million and the day I met her I should have bought a lottery ticket instead.”

I sat on that line for a long, long time. The real problem was not so much the femme fatale. It was her adversary. I wanted more of a challenge for her. More of an equal than Ned Racine or Mike Swale. That and the fact that I still had no clue what the story would be.

I was actually piling up the words for a completely different book, a sequel to my first novel, My Brother’s Keeper, when all the pieces just fell into place like a backwards film of a Jenga game a year or so ago. Not only that, but for the very first time, I had a contemporary story. I’ve set my books in the 1940s, 1950s, 1960s & 1970s. Then I skipped way ahead in my Munchausen Series into the future. But nothing in the here and now. So I set aside Jungleland and started in on the story of Helena and Griff.

She is a modern “face that launched a thousand ships” with a half a billion dollars in the bank and some ugly suspicions about her father’s death, a billionaire tech sector investor.

He’s a Wyoming cowboy who served in the Navy SEALs and operates as a “fixer” for his high powered Chicago lawyer buddy Lance Baylor.

But who’s playing who?

Most of what happens in Article 15 is way over my pay grade, though most of Griff’s flying experiences can be found scattered about in my pilot log book from the times I lived and flew out west.

“She was one in a million…and the day I met her I should have bought a lottery ticket instead.”

Griffith Crowe, the "fixer" for a Chicago law firm, falls for his current assignment, Helena Nicholson, the beautiful heir of a Tech Sector venture capitalist who perished in a helicopter crash leaving her half a billion dollars, a Learjet 31, and unsavory suspicions about her father's death. As he investigates, the ex-Navy SEAL crosses swords with Helena’s step-brother, the Pentagon’s Highlands Forum, and an All-Star bad guy somebody has hired to stop him. When Griff finds himself on the wrong side of an arrest warrant he wonders: Is he a player or being played?

Lawyers and Lovers and Guns…Oh, my!

The low, almost husky yet honey smooth female voice poured seductively over Griff and blanked his mind as he turned into the pilot’s lounge. Though dimly lit, as they all were to facilitate napping, her red dress glowed like a hearth, yet she still wore her sunglasses as she studied her iPhone’s screen, slouching and sitting askew in one of the La-Z-Boy recliners with her legs crossed. Griff’s eye was drawn to the slow but rhythmic bounce of her stiletto heel. Predator had become prey. She took off her Jackie Ohhs, looked Griff up and down, then took a deep breath.

Griff locked onto her blue-gray eyes and surrendered. He leaned against the door jam. His inside voice taunted, No plan survives contact with the enemy.

“I couldn’t help but notice Lance’s Escalade on the ramp. He is a conniving bastard, isn’t he? Of course, he is a lawyer, but he does excel at it. Not to mention the unseemly delight he takes in it.”

“Then, you really shouldn’t be surprised.”

Griff smiled, realizing it wasn’t Mayor Daley’s fault that he was still on the ground in Chicago. “Name’s Griff.”

He waited, his face an implacable facade, one molded and hammered into place on the Coronado Beach while enduring BUD/S training. “You got a name? Or will you answer to minx or vixen?”

“So…how long will we be playing Three Card Monte with modern art…Helena? 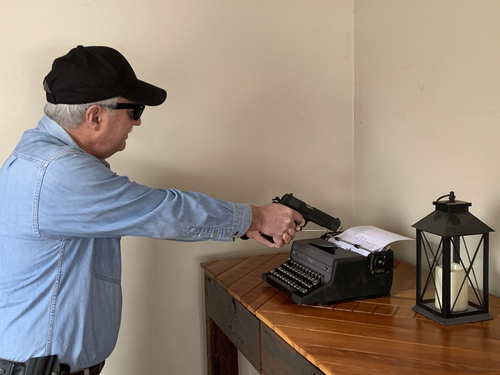 M.T. Bass is a scribbler of fiction who holds fast to the notion that while victors may get to write history, novelists get to write/right reality. He lives, writes, flies and makes music in Mudcat Falls, USA.

Born in Athens, Ohio, M.T. Bass grew up in St. Louis, Missouri. He graduated from Ohio Wesleyan University, majoring in English and Philosophy, then worked in the private sector (where they expect “results”) mainly in the Aerospace and  Defense manufacturing market. During those years, Bass continued to write fiction. He is the author of eight novels: My Brother’s Keeper, Crossroads, In the Black, Somethin’ for Nothin’, Murder by Munchausen, The Darknet (Murder by Munchausen Mystery #2), The Invisible Mind (Murder by Munchausen Mystery #3) and Article 15. His writing spans various genres, including Mystery, Adventure, Romance, Black Comedy and TechnoThrillers. A Commercial Pilot and Certified Flight Instructor, airplanes and pilots are featured in many of his stories. Bass currently lives on the shores of Lake Erie near Lorain, Ohio.

M.T. Bass will be awarding a $50 Amazon or Barnes and Noble GC to a randomly drawn winner via rafflecopter during the tour.
a Rafflecopter giveaway
Posted by Lisabet Sarai at 3:00 AM

Glad to have you back. Thanks for a great post and a very generous giveaway. I hope my readers appreciate it!

(Love your author photo, too!)

Where do you do most of your writing?

Thanks so much for sharing your terrific book. I sure enjoyed reading about it and appreciate you taking the time to share it with us.

Thanks for having me on the Article 15 Blog Tour.

I am always looking for new authors to read. This book sounds like the kind I enjoy reading.
jwisley(at)aol(dot)com

Thank you for sharing an excerpt