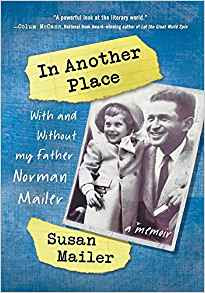 In Another Place: With and without my father Norman Mailer by Susan Mailer
Northampton House Press, 2019

I don’t usually read memoirs—in particular, the sensational and exploitative memoirs often penned by the children of celebrities. However, In Another Place was highly recommended by a close friend. Meanwhile, I’ve always found Norman Mailer intriguing. Brilliant author, legendary bad boy, respected intellectual and feminist whipping post, his influence still looms large over twentieth century culture. I will admit to being curious to see him through the eyes of his eldest daughter.

Susan Mailer’s memoir could hardly be further from those whining exposés I try to avoid. Rather, it is a delicately balanced, emotionally subtle account of the author’s complicated relationship with a father who clearly loved her but was not always successful in expressing this love, either in words or in deeds. The author avoids hysterics and hyperbole. Her account is dignified and restrained, even when she’s recounting severely traumatic events. Nevertheless, one closes the book with a strong sense of both Susan herself and her paradoxical parent. Her measured treatment does not mute the memoir’s powerful impact.

I suspect that this was difficult book to write. The awkward title encapsulates the problem. Ms. Mailer spent her childhood and teen years shuttling between two countries and two cultures: vibrant, sociable Mexico, where her mother lived and practiced medicine, and trendy, competitive New York, her father’s domain. Wherever she was, she felt the pull of her other life. Of course, children of divorced patterns often experience this sort of conflict. In her case, geographic distance and her father’s fame exacerbated the pain of the split. Hence the memoir’s subtitle. Including the name “Norman Mailer” is more than just a ploy to sell books. As the child of an acknowledged literary genius, Ms. Mailer felt special pressure to impress her father with her intelligence, her talent and her “guts”. At the same time, she was trying to find her way as an individual, to build a life in which she was more than just “Norman Mailer’s daughter”.

It took great courage for the author to revisit her psychologically turbulent early years as she does in this volume.

The book also explores the destructive effects of fame on private life and personal relationships. Norman Mailer, it appears, sometimes believed in his own myth. Propelled into the limelight before he was thirty by his best-selling debut novel The Naked and the Dead, he faced the problem of topping his own personal best. Ms. Mailer does not shy away from portraying his egotism as well as his insecurity. At the same time, she shows how sincere he could be, how charming, loving and generous, as well as diligent, almost driven, when it came to his writing.

In Another Place follows a linear trajectory in time, starting just before Susan’s birth and stretching to her father’s death in 2007. The book includes many of the well-known (and sometimes infamous) incidents in Mailer’s life: his stabbing of his second wife; his run for Mayor of New York; the ad-lib weekend making the experimental film “Maidstone”, including his violent brawl with co-star Rip Torn; the infamous Town Hall- “A Dialogue on Women’s Liberation” - where Mailer moderated, and baited, a panel of renowned feminists. However, Ms. Mailer also chronicles other, more private moments with her father: ski weekends in Vermont, bullfights in Mexico, late night conversations, angry tantrums, and memorably, fun- and love-filled visits at the “Big House” in Provincetown, where Norman Mailer played benevolent patriarch to his nine children and their offspring. The portrait that emerges is fascinating, nuanced and multi-faceted, enlightened by the author’s professional knowledge as a practicing psychoanalyst as well as by the insights and perspective that come with age.

The description above might suggest that this is a book about Norman Mailer, but in fact Susan herself is at the center of the tale. The memoir is an effort to put her own life in perspective, using the mirror of her relationship, to reconcile the fact that she will always be Norman Mailer’s daughter with the recognition that she is much more.

I have not said much about the writing. Ms. Mailer’s prose is crisp, concise and evocative. The structure of the book balances drama with history in a pleasing alternation. The author’s reminiscences do not shy away from negative emotion but are never self-indulgent.

In short, I was deeply impressed by this brave, honest, skillfully crafted work. Even if you’re generally not a fan of memoirs, I recommend it.