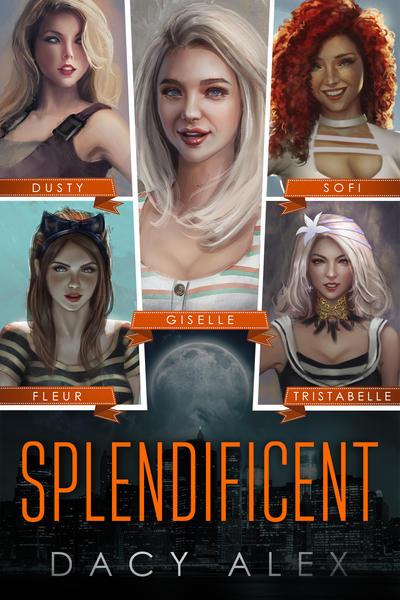 Hi, everyone! I’ve got a special treat for you today.

Gathered around for another thrilling Beyond Romance interview are the girls of Splendificent! Fleur Flannagan, Dusty Blackwood, Tristabelle Elvrina, and Sofi Poe. Not to mention the delicious Giselle Nyfall, California girl in residence. On hand to interview them is Dacy Alex.

FLEUR: “Retelling” eh. The first book sold like shit, so you change genres and reboot the series to make money?

DACY: I got a lot of gambling debts.

FLEUR: Same. But don’t ask me about this book because I was drunk as shit for most of it. I don’t know what the fuck happened.

SOFI: I’ll loan you some money, Dacy. One of my fans just Cash App’ed me 500 dollars just for being so pretty.

GISELLE: Well, I’m still the main character so I’ll talk about the book! I’m a super popular girl from California with tons of friends and I don’t trip over stuff, or break expensive objects, or accidentally start fires, or perv on Snap, or have an unhealthy fear of my mother.

DACY: Literally that was all lies.

SOFI: And most of all there’s…me! And speaking of me, let me tell you about my social media empire.

DUSTY: Be quiet, Sofi. Did someone say violence? That’s where I come in. We had to tangle with some demons in the book. And it didn’t go too well for them. And it ain’t gonna to well for anyone who reads this interview and don’t buy the book. So lemme put ya’ll readers on notice, if any of you yellow bastards go to Amazon and buy a different book than Splendificent then I hope the good lord above has mercy on your soul, because ain’t no prayers gonna save your ass from Dusty Blackwood!

DACY: What the hell kind of sales pitch was that? You can’t threaten people on Lisabet’s blog.

DUSTY: Son, I’m Dusty Blackwood and I’m gonna do whatever I want.

SOFI: That’s why you’re only a pixie, Dusty.. The fairy council said you’re too violent to be a fairy. And your mother is the Tooth Fairy and she must feel so ashamed.

GISELLE: But in the end, I think our story is about friendship and bonding. We're all just trying to work together to maybe save and change the world for the better. But we're connecting at a deeper level.

FLEUR: Exactly, that's very important for kids in college. I was talking to some sophomore and she was complaining about eating her girl's ass. Just on and on about how her girl makes her eat ass. And I asked why do ya do it, and she said “because I want companionship.”

FLEUR: People eat shit to stave off loneliness. And that's what our story is about.

DACY: You don’t want me to sell a single book, do you?

FLEUR: I hope you never make a nickel.

SOFI: I got ya, Dacy. Another one of my followers just Cash App’d me 300 dollars.

DACY: Princess Tristabelle you’ve been awfully quiet, and your sort of the leader-

FLEUR: Leader? Leader of what?

DUSTY: Of the group, silly.

GISELLE (nervous laughter): And we never will because we’re like The Three Musketeers: all for one, one for all! Right, girls?

TRISTABELLE: Let the record show I, Tristabelle The Bright Eyed of Clan Elvrina — princess of Golden Land, Jewel of the Realm, Sister of the Goddess Freyja, the Heartbreaker, Arterial Sprayer and Mistress of Mistlewoe — was not “awfully quiet” but rather seated calmly internally screaming.

TRISTABELLE: Because violence against the press is generally frowned upon in your country. Misrepresentation is a serious offense in my homeland. This “retelling” of our adventures is far too kind to certain individuals.

DUSTY: At least I got looks and big knockers, you old hag.

DACY: Forgive me, Your Highness, but I must remind you this is just the first of a series of books.

TRISTABELLE: And I remind you, sir, the whistle of a sword cuts sharper than the clack of a keyboard.

TRISTABELLE: Now allow me to echo what Dusty has said. Hear this, readers of Beyond Romance, and hear it well! If you do not buy the book, Splendificent, you will be stripped of your lands, your titles, your clothes, and your head in that order. That is how you sell a book.

DACY: I need that money more than ya’ll need that head, for real for real. But we’re out of time. Good talk, ladies!

Buy Links – Better get ‘em out there now, right?

Lusted over by men, hunted by demons

California girl Giselle Nyfall arrives in the Big Apple to attend Hemera University, but instead of a higher education she finds herself in a dangerous situation when a computer glitch lands her in an Upper East Side penthouse for extraordinary young women. And her sexy new roomies aren’t your ordinary college girls. One is an elf princess with a love for skating and the art of war, the other a B.B. gun toting fairy exiled to the human world for being too violent by her mother — the Tooth Fairy —, a social media obsessed shapeshifter, and finally, a vampire succubus demon with a big gambling problem

Together they uncover a curse which has men in their condo behaving even stranger than usual. And the only cure in this splendidly magnificent tale is…themselves!

Warning: Splendificent is a raunchy, wild comedy intended for mature readers only!

A native of Maryland, Dacy Alex has taken home several screenwriting awards under a different name. He loves the possibilities of the supernatural but also the inherent weirdness of the everyday world and likes to combine the two whenever possible. Dacy likes to focus his stories on new adults, which might explain why he can subsist on a steady diet of CW shows and cans of Starbucks for days at a time.

If you want to contact Dacy he can be reached at: dacyalexandria [at] gmail [dot] com.

Congratulations on the release, Dacy, and thanks for a hilarious interview!

Don't let the gals browbeat you!