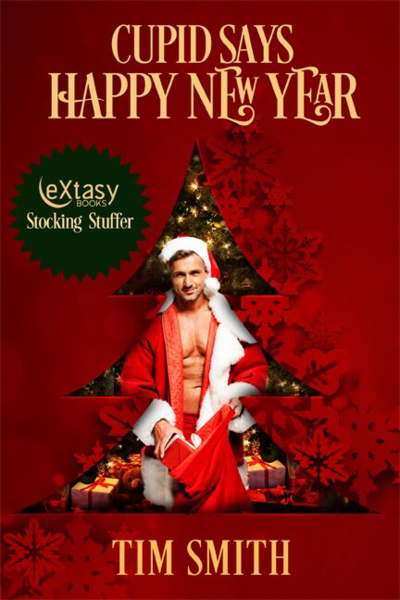 If it’s the Holiday Season, it must be time for Stocking Stuffers from Extasy Books. My contribution to this annual series of short books, Cupid Says Happy New Year, was recently released. This is a sequel to last year’s holiday release, Santa Slept Here. As with all of my series titles, they don’t need to be read in order.

In last year’s tale, we met Scott Burke and Lisa Berger who were high school sweetheart wannabes once upon a time. That was fifteen years ago. Sparks were rekindled when Lisa found herself stranded in Scott’s home base on Christmas Eve, and they realized that they never should have parted. Now it’s a week later, and they’ve made plans to spend New Year’s Eve together. Will the two lovers keep the flames burning, or will Lisa decide to return to her lucrative job in another state once the glow of the New Year begins to fade? Can Scott bring himself to make the ultimate commitment, or will he stand aside and lose her a second time?

When I conceived Santa Slept Here last year, the premise I started with was the lonely guy, not looking forward to his first post-divorce Christmas. His family had other plans, so he was on his own. On his way home from work on Christmas Eve, he stops at his favorite bistro and runs into his former high school sweetheart, whose car had broken down on her way to their old hometown. One thing leads to another and she agrees to stay at his home until her car can be repaired. Your imagination can fill in the rest.


Scott slid out of bed and refilled their glasses. He handed Lisa her glass, then joined her under the covers. They rested against the headboard and toasted each other. Lisa snuggled closer and rested her head on his shoulder.

“This is nice,” she said. “It’s fun cuddling with you. I think I could get used to this, Scotty.”

“Do you know that you’re one of the only people I let get away with calling me that?”

“My grandmother, but I let it go because she thinks I’m perpetually eight years old.”

Lisa laughed with him. “I say that as a term of affection.”

They cuddled in silence for a few minutes. Scott enjoyed Lisa’s warm, soft body next to his. She placed her hand on his chest and lightly traced a pattern with her French-manicured nails, causing a slight tickling sensation. He ran his palm along her upper arm and inhaled her scent.

“I love that perfume you’re wearing,” he commented. “What is it?”

“Thank you.” She hesitated. “Can I tell you something?”

“Last week, when we lay together like this in your bed, I felt something I hadn’t experienced in a long time.”

Scott took a sip from his glass. “What was that?”

“It was the way you held me, and talked to me, like you’re doing now. You made me feel really close to you, like you didn’t want to let me go.”

Scott thought for a few moments, dredging up memories of his failed marriage while wondering how much he wanted to share.

“Since we’re being honest, it had been a while since I felt a deep connection with anyone like I did with you. The last year or so of my marriage wasn’t the best of times, and sex was more biological necessity than I-want-to-hold-you-forever. Make sense?”

Lisa took a drink of wine. “Actually, it does, now that you put it that way.”

“Similar experience in your failed relationship with the guy you were telling me about?”

“Pretty much, but I never thought of it that way. He was such a control freak that I felt like I was just spreading my legs so he could get off while fantasizing about the cute ass of the new secretary he’d just hired.” She paused. “The last few months we were together, I felt like he was making love to someone else.”

Scott gave her a soft kiss, letting his lips linger against hers for a few moments. He placed his palm on her cheek and peered into her eyes.

“I think that’s the difference. When we reconnected and talked about how we’d always had feelings for each other but never did anything about them, that made me realize how much I’ve always loved you. I guess that’s what you were feeling last week.”

Lisa ran her fingers along his cheek. “You mean it wasn’t just because we finally made it into bed and lived out a few dormant high school fantasies?”

Scott chuckled. “Trust me, it was a lot more than just that. What we did last week wouldn’t have meant nearly as much then as it did now.”


Cupid Says Happy New Year and the prequel, Santa Slept Here, are both available at Extasy Books and Kindle. They make the perfect stocking stuffers!

Lisabet, thank you for hosting me today. It's always a pleasure to guest on your site.