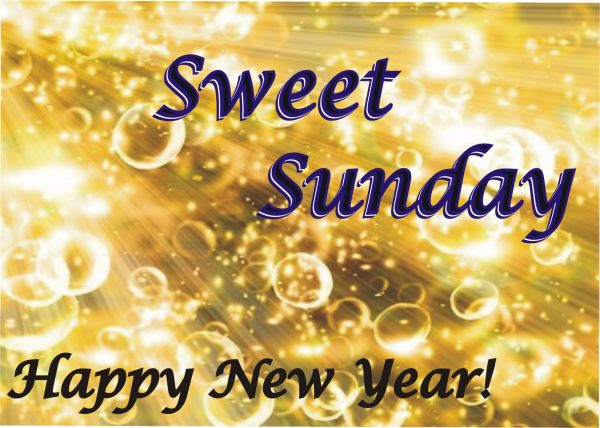 Some of you may have wondered if I can write anything that doesn’t include full-out, graphic sex. So for today, instead of “Sizzling Sunday”, I’ve got a “Sweet Sunday” vignette for you— a brief taste of romance that promises happily ever after.

Meanwhile, I want to wish every one who reads this the very best of everything in the upcoming year: love, laughter, good health and prosperity. Blessings to you all!

A Kiss at Midnight

It wasn't deliberate, or what she'd expected.

Laura had actually planned to leave around eleven. She had to work tomorrow; hospitals didn't close for New Year's Day. The one glass of wine she allowed herself was long gone. She was exhausted from last night's shift. Her jaw ached from the constant smiling. She really didn't want to hear any more about Jill's and Howie's upcoming trip to Jamaica, or Martha's promotion, or Reese's engagement. All that Laura had to look forward to was curling up in the new quilt Mom has sent for Christmas, with a paperback mystery and her plump tabby Morris for company.

She'd made moves toward the bedroom where the coats were piled, but Gretch had intercepted her and begged her to stay. Gretchen was her best friend. Laura felt guilty refusing. She accepted a plastic glass of champagne and stood by the window, watching the drifting snow. Most of Gretchen's guests huddled around the TV, counting down with the broadcaster in Times Square.

Huge flakes swirled lazily like feathers from giant down pillow. She hoped that she'd be able to get a cab. Without thinking, she sipped at the effervescent liquid in her hand. It was chill and sweet on her tongue.

"Five. Four. Three. Two. One..." came the chant from the rest of the crowd. Laura barely heard them.

She felt his presence behind her an instant before he laid a firm hand on her shoulder and turned her around. She had a confused impression of worn plaid flannel and tousled brown hair as he gathered her to his chest and brought his face to hers.

His mouth was silky and strong and tasted like champagne. His brazen tongue played along the seam of her closed lips, teasing her into opening. A rush of heat flooded her when he entered, turning her earlobes and her nipples to burning coals. The air seemed to leave her lungs, sucked out by his energetic kiss. She staggered against him, suddenly dizzy. He held her closer, one bold hand cupping her buttocks while the other supported her under her arms.

He delved deeper, fanning the flames that whipped through her body. Between her legs, under her tights, she was melting. His scent rose around her, cherry pipe tobacco and old-fashioned lavender cologne. She ventured a tentative hand up his back and felt solid muscle move beneath his shirt. His fingertips grazed the side of her breast. A spark shot from her nipples down to her sex. She gasped into his mouth and he swallowed the small sound, kissing her harder.

Laura lost herself in the velvet darkness behind her closed eyelids. She didn't want to break the spell. She relaxed into his arms, letting him explore her body as though they were completely alone. Rigidness pressed against her belly, kindling a drunken sense of triumph. He was as aroused as she was.

The kiss lasted for hours. One moment he nibbled delicately as her lips. The next, he forced her wide and plundered her mouth, grinding his thigh against her crotch all the while. Champagne bubbles had found their way into her blood. She felt bouyant, giggly, light as air.

Finally he released her. "Happy New Year," the stranger murmured into her ear, nuzzling her throat wetly. Laura gazed up at dark eyes brimming with laughter and intelligence. She realized that she was trembling.

"Do I know you?" His face was vaguely familiar, but the rich baritone voice was completely new.

"You do now," he said with a grin. He raised his champagne glass to her in a silent toast, then took a sip. "I'm Dan. Gretchen's brother. And you're Laura, right?"

"Um--right." Laura felt her cheeks burn with embarrassment. "Did Gretchen put you up to this?"

She forced herself to move away from him, even though what she really wanted was to throw herself back into his arms.

"Put me up to what?" Dan raised his eyebrows in mock innocence. "It's midnight on New Year's. You're supposed to kiss the person standing next to you."

Laura looked around. Sure enough, lots of couples were locked in heated embraces. She would have sworn that Dan's kiss had taken hours, but clearly it was only moments after midnight.

"Hm--well--thank you." Her still-taut nipples pressed against her sweater. She was sure that Dan could see them. She took another step backward and was acutely aware of how damp her panties had become. "I've got to go home now. Happy New Year."

"Wait!" He grabbed her hand. His strength was obvious. Laura wished she could melt into the floor.

"Don't go yet. It's early." He searched her face and she saw doubt in his eyes for the first time. "Unless there's someone waiting for you...someone else...a lover..."

Laura's resistance fluttered away like the snowflakes outside. "No, there's no one waiting for me--except my cat. I don't have a lover."

Dan's relief was obvious. He circled her waist and pulled her against him. "Now you do."

His lips claimed hers once more. Laura knew it was going to be a good year.

Posted by Lisabet Sarai at 3:10 AM