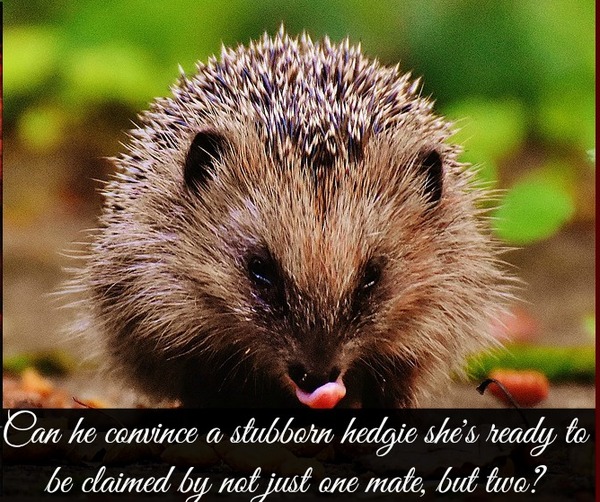 When I saw that my friend and colleague Erzabet Bishop had a hedgehog shifter romance out, I begged her to send me a media kit so I could share it with you. I love authors who push the envelope! ~ Lisabet

There is strength in submission…and knowing who you are.

Natalie Erinaceus has a problem. Her manipulating mother won’t stay out of her dating life. One more dinner with a blind date and someone is getting a fork to the eye. Her inner hedgehog wants a mate and nothing is going to stop her. Not her nervous hedgie’s habit of balling-up and certainly not that online questionnaire. Who writes those things anyway?

When Sylvia and Paige from Shifting Hearts Dating Agency step in maybe, just maybe this curvy girl will find more than she ever dreamed in the arms of the men who are fated to be her mates.

Nothing ventured nothing gained…

Jonathan Blevins is a bear shifter looking for love. His family murdered by poachers, he came to Cypress Canyon to rebuild. When he finds Lucas, it’s one step in the right direction. He has one mate but can he convince a stubborn hedgie she’s ready to be claimed by not just one mate, but two? 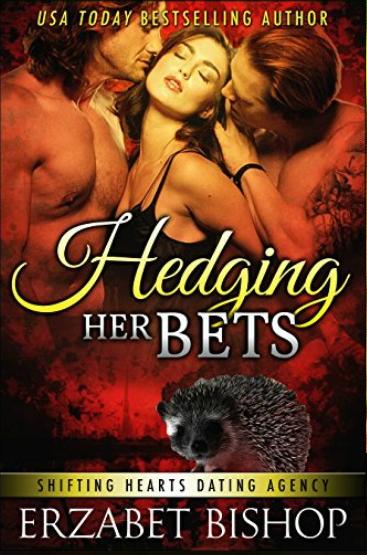 “Paige, where in the hell did you put the password log book?” Sylvia groaned as she flicked on the computer and the logo for the Shifting Hearts Dating Agency flashed across the screen. The agency had been open for six months, growing a little more every day. Their wall of successful matings and marriages increasing making Sylvia eager to check out her newest applicants and see any potential matches. But she always forgot the password. Either that, or Paige was always changing it.

She bet the latter.

A descendent of Aphrodite, helping others find love was in Sylvia’s blood. Nothing made her happier. One day she’d find her own swoon-worthy prince charming, but at this point…well, she was content helping others. A tinge of sadness slid in and she firmly booted it away. The right person would come along at the right time, not before. This was her job, her chosen career and damned if she wasn’t going to use her power for helping people. With a push if it required it.

But if she saw that damned incubus, Carter, again, she was going to shove his ass clear out the window. Cheating fucker. He’d get his one day. She had people to help and it didn’t do her much good to think about murder before she’d at least had a cup of coffee. A really big cup too.

Everything here in Cypress Valley, Texas ran toward big and she hoped by setting up business here with the growing shifter population, her profits would start to be too. It was all great being descended from Goddess material, but if you didn’t have the dollars to go with the lifestyle, then it wasn’t so much fun anymore. Time to shake her money maker and get some romance in the air.

She got up from the desk, her new heels making her wince. She hobbled over to the kitchenette area in the back of the office and flicked on the overpriced individual cup coffee maker Paige insisted they buy. Her co-partner stood next to the counter, stuffing the better part of a jumbo blueberry muffin into her mouth.

“Now that is one big muffin.”

She held up a finger and kept on chewing.

“Nice salute there, hun. Cat get up on the wrong side of the bed this morning?”

Paige growled around the muffin, her cat shining in her eyes.

“Ewwww. Somebody is grumpy today.” Sylvia rolled her eyes and shook her head. Coffee. Lots of coffee. Then she’d deliberate about food. And passwords. She eyed the flavored pods with distrust, knowing Paige was watching, and selected one that read Hazelnut. She popped it into place like Paige had shown her and hit the start button. A dribble of brown liquid began to flow from the machine and too late she remembered she hadn’t placed a cup below the spigot.

“Shit!” Sylvia scrambled and reached for the nearest mug, shoving it in place. The scalding hot liquid poured over her hand and she let out a yowl.

A choked laugh from across the kitchenette met her ears.

Still munching on her muffin with an innocent smile on her face, Paige grinned and gave a pinky wave.

Bitch. At least that was an improvement over the last finger, she supposed.

Sylvia gazed at her friend with narrowed eyes and ran her hand under the faucet. “That wasn’t nice.”

“Sorry. But you made me almost inhale that one.” Paige snorted into her hand and popped the last of the muffin into her mouth. Not afraid of sporting her brunette curves, Paige was a kitty to be reckoned with, whether it was man or muffin…or modern appliance.

“Ugh.” Sylvia snatched up her cup and marched back to her desk, irritation prickling under her skin. New machines wigged her out. So did computers and newfangled cars. If she got too excited, her goddess tendencies could have adverse side effects to the point where Paige teased her that she must be related to Harry Dresden. At her blank look, she’d sighed and flicked something up on her phone, twisting it so Sylvia could see. “You know. The Dresden Files?” A picture of a book cover covered the screen.

She’d had no earthly idea what her friend was talking about. If it didn’t have vampires or a hot scantily clad shifter, she didn’t bother.

“You need to read more than just smut, girl.”

But what was the point to that?

“Sorry, Syl. The password book’s in the drawer where I always leave it.” Paige maneuvered her way to the desk on heels so high Sylvia didn’t know how she didn’t fall on her impeccably made up face. “And unless you plan on sticking your mouth underneath the pour nozzle, I’d have a cup ready next time.”

Her friend’s blazer and top worked well with the jeans and boots she’d selected for the day. It was raining and knowing her cat shifter partner, she’d rather be curled up in her bed with a pile of blankets than be out and about.

Paige clutched an oversize cup of coffee like it was her lifeline, pausing mid-stride to take a sip. The rest of her may have been spot on but her bleary eyes told a story. Sylvia wasn’t sure she really wanted to ask.

“Yep.” Paige set the cup down, the milky brown liquid sloshing dangerously close to the rim. “Tried out a new venue last night and I think I found us a whole new segment of the shifter population.”

“Really?” Sylvia grinned, “And where did you go, pray tell?”

Paige glanced around, nibbling her lip. “Is Rafe here?”

“Nope. I haven’t seen your brother yet. Why?”

“Good.” A flash of cat in Paige’s eyes revealed her excitement. “I went to Ventures.”

Sylvia wrinkled her nose. “Where?”

“The new bondage club on Fifth Street. It caters to humans, shifters, and other paranormals.” A smile lit up her eyes and she reached for the coffee again, sitting down with a wince. “They had a kind of open house event and I wanted to check it out to see if there was any potential for us to join forces.”

Paige focused on her cup, a secret smile on her lips.

“Did you hurt yourself?”

Sylvia blinked. Oh….So that was how it was.

“So you think we’ll get some clients?”

Paige fidgeted in her chair and fired up her own computer. “You just wait, girlfriend. I have a feeling before the day is out we’ll be seeing something new coming across our desk. Now, where did you put the file on the Jefferson twins? I think I met someone that could give them a run for their money.”