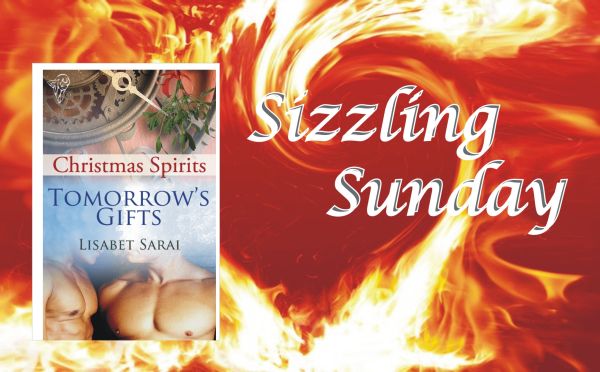 Oh, by the way – this paranormal romance holiday tale is on sale for only 99 cents at most outlets, including the publisher and Amazon.

The ghost of Christmas future...

Michael loves his burly, powerful partner Neil, but he's too embarrassed to share his secret fantasies of submission and surrender. Frustrated and confused, he wonders whether he and Neil really belong together.

Then, on Christmas Eve, Michael receives a visit from a sexy Dom, Thorne Wilder, who claims to be his lover from the future. Thorne shows Michael scenes from a wild life of sexual excess that he claims they'll share if he breaks up with Neil.

Should Michael trust the ghost of Christmas future, or does his true future lie with Neil?

“So, Michael. Have you been a good little boy?” Neil loomed over me, one hand against the wall on either side of my head. “Do you deserve the goodies that Santa’s brought for you?” Leaning forward, he trailed a wet tongue up my neck, from my open collar to just below my earlobe. When I squirmed in response, he flattened his pelvis against the lump growing in my jeans and fastened his mouth on mine. The fake beard got in the way. He ripped it off and resumed kissing me, while his hands slipped around me to cup my ass.

I loved the way Neil kissed, with his full body, investing his entire being into the process. I snuggled against his red felt jacket, allowing him to take possession of my mouth. His kisses were deep, wet, full of soul. They made me light-headed. They made me hard. I could taste the beer he had drunk at the party and the peppermint candy cane that we’d shared on the way home, but underneath there was the familiar flavour of Neil, my housemate, friend and lover.

I forced my hand between our bodies and fumbled at his zipper. “Oh, are you being a naughty little boy?” he breathed in my ear. “Santa will have to punish you.”

His words thrilled me. Oh, if only he would make good on his threats! I knew from experience that he was only teasing, though. But maybe tonight would be different. With the holiday high, the post-party buzz, maybe tonight he’d give me what I craved.

I wrenched his fly open and wriggled through the opening in his briefs until I had what I wanted – the silky sensation of his cock-skin under my fingers. My own cock throbbed as I stroked him, marvelling at the contrast between the rock-hard flesh underneath and the satin-smooth layer that enclosed it.

I wanted to sink to my knees and suck him, right there in the hallway. I wanted him to fuck my mouth until I gagged, then drown me in his come. Instead, he extricated my hand from his trousers and squeezed it affectionately. “Let’s go to bed, baby. Let’s get naked.”

I followed him down the corridor to the back of the flat. By the time I reached the bedroom, the Santa costume was a crumpled scarlet heap in one corner. Neil stood by the side of the bed, hands on his hips, his cock jutting proudly from the black tangle at his groin. He was a fearsome sight, a towering six foot four with thighs like tree trunks and arms that could crush you to a pulp. It’s true, his hairline had started to recede, and he had the barest beginnings of love handles. He was thirty six, after all. But he was still the powerful, bear-like guy I’d fallen in love with three years ago.

Before he knew what was happening, I was at his feet. I grabbed his cock and swallowed it whole, burying my nose in the fragrant, curly hair at its root. My balls tightened as I was washed in his scent. He moaned and jerked his hips, ramming the bulb against the back of my throat. My cock surged. When he heard me gag, though, Neil retreated, pulling halfway out of my mouth. I sucked him back in, swirling my tongue around his shaft, trying to make him lose control.

It didn’t work. He pumped in and out of my mouth with measured thrusts, careful not to plunge too deep. I reached between his legs, stroked his balls, brushed my finger across his sphincter, urged the tip inside. Neil groaned and clenched his cheeks together, trapping my hand. But he didn’t let go the way I wanted him to. He didn’t go crazy. He didn’t grab my hair and ram his cock down my throat, the way I’d imagined.

He felt wonderful. He tasted great. I knew that I was giving him pleasure. My own cock was huge, aching to be let out of my jeans. I felt his love, surrounding me. He was in touch with me – he could read my reactions. He knew when he was causing me pain. What he couldn’t sense, apparently, was the fact that I didn’t want him to stop.

Before long, he pulled out. Perhaps, at some level, he did feel my disappointment. “I’d much rather come in your tight little ass,” he told me with a grin as he undressed me, gleeful as a kid unwrapping a Christmas present. He ran his hand over my smooth pecs and down my belly. “God, Michael, you are one hot boy.” Grasping my cock in his fist, he smeared my pre-come over the bulb with his thumb. My hips jerked reflexively. “Yeah, that’s right. That’s a good little boy. Come for Santa.”