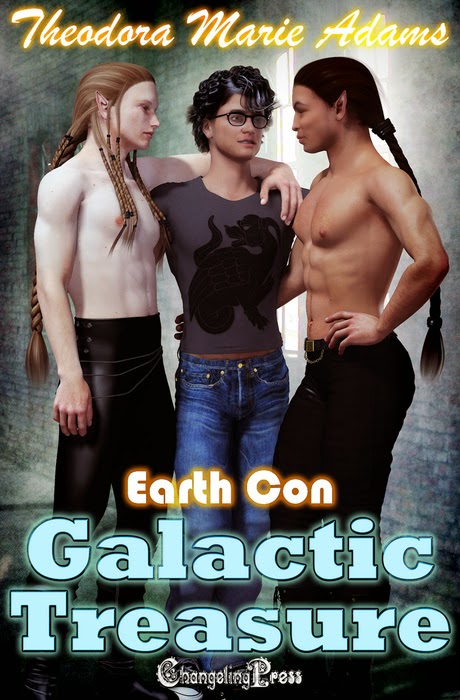 Connor Masterson has finally managed to take some time off and go to Earth Con. For three days and nights, he’s going to get his geek on without worrying about work or the latest edition of his science fiction manga novel. He never expected to find two men who embody all his dreams and fantasies there and certainly not right after signing in.
Neither Valvik nor Zaraheed are looking forward to their current assignment: go to the Earth Con located in Austin, Texas and track down any and all rumors on the Ark scrolls, an ancient collection needed for the betterment of their dying people. Neither warrior expects to be drawn to a human, especially the same one.
The two men are determined to stay as low key as possible while searching for the scrolls, but that might be hard to do with an intergalactic killer wants the scrolls for himself.
Excerpt
Connor turned his head to the left to look into Victor’s lavender eyes. They appeared luminescent even in the dark bar. He swore they shined as though backlit with light. Whatever company made Victor’s contacts had done a wonderful job. If Connor didn’t know for a fact that nothing human could have that eye color, well, he would swear they were real. Though he knew they were fake, there was no denying what looking into those eyes did to him. His cock swelled, his heart pounded, and thinking became rocket science. “Uh,” he stammered out intelligently.

Victor’s lips tilted up just the slightest bit at the edge. Connor got the distinct impression Victor was trying very hard not to laugh at him. He should’ve been offended, but he wasn’t. Instead he found an answering half smile on his own mouth. Yeah, he was totally acting like a starstruck teen, but he couldn’t help it. These men perfectly embodied what he wanted in a man. Things he never thought he’d get in one -- or in this case, two -- packages.

“Come. Join us. We promise you will not regret your decision,” Zack said.

He didn’t doubt, not after what happened just minutes ago in the back of the taxi. The question was should he keep going, allow this thing between them to go where it wanted. He could walk away, call it quits, but did he want to?

Connor tilted his head slightly to the right to look at him. His eyes were a dark amber color, no less alien than his friend’s.

When he was ten Connor realized he wasn’t like his classmates and liked boys. Since then he’d been blessed and cursed to meet some truly fascinating guys, men he couldn’t help but fall for, but he had yet to meet a person who called out to him as much as these men did. Not even his ex-boyfriend affected him as strongly as they did and he was with the guy for three years.

The attraction was exhilarating. Invigorating. Frightening.

Zack moved just a little bit closer and the heat from his body burned along Connor’s skin. “Give us this night. Let us provide your every need, fulfill your every desire. Connor, let us treasure you.” Zack’s breath tickled Connor’s nape and his words seared his ear.

Let us treasure you. Connor swallowed thickly and nodded his head. How could he say no to that?

[Theodora will be awarding a grand prize of a $25 Amazon GC to a randomly drawn commenter during the tour and five $5 Amazon GCs as runner-up prizes. Use the Rafflecopter widget at the end of the post to enter.]

Theodora is an avid traveler who discovered Japanese manga and anime in her youth, closely followed by yaoi. She’s been in love with pretty boys who love equally attractive men since then. Theodora can usually find her in a local coffee shop drinking black tea and typing furiously.
http://www.TheodoraMarieAdams.com

Welcome to Beyond Romance, Theodora! This sounds like a lot of fun. And I love the cover (that's why I posted it so large LOL.)

Good luck with the release.

The excerpt was a little short, but I do enjoy geek characters like Connor.

I enjoyed reading the blurb and excerpt the book sounds really good please count me in for the Giveaway............ thank you

Love the line...let us treasure you. I have to add this book to my TBB list just for that!

Love the premise and excerpt. Mist put this one on my TBR.

I like that it has something to do with aliens. That makes it very interesting for me.

I loved the excerpt! This sounds wonderful.

I loved the excerpt and now I want the book *Checks bank account* Darn it no money, guess it will have to wait :( *crosses fingers for a win*

Enjoyed what you shared! I do not believe I have read your work yet... making note!

I believe lightening can strike twice and at the same time. I'd hate to have to make a choice and forever wonder if it was the right one, so I love that you can choose both.

the Excerpt it was hot.