I’m Alisa Anderson, author of the Give and Receive Series, and co-author of the Fallen Angel Series. Thanks for having me today!

I love ménages scenes. They will forever remain some of my favorites. I have always been a greedy, selfish kind of bitch, never wanting to have to choose between two yummy, scrumdiddlyumptious men, but wanting all focus on me. The ultimate head trip, eh?

In fact, my philosophy is you can never have too many men. There is always a reason for more men in the bedroom, lol. If you’re otherwise occupied, they can at least be a feast on the eyes as they please each other, both for your enjoyment and for theirs. (Yours most of all though. After all, it’s your fantasy, right? *grins*)

I also love the idea of being on display for someone else. There’s something so fantastic, titillating, forbidden, not to mention arrogant, about performing knowing someone else is watching, getting off while you do the same. It’s a heady, hedonistic, thoroughly wanton feeling, knowing you have that kind of power. Definitely a complete rush.

In my novella series Give and Receive, this is one of my favorite scenes with Ty, Danny and Lena. What I love most of all is there is no actual fucking. There is so much tension in the air, you can almost taste the promise of what’s to come, and trust when I say, if you stay tuned for books II and III, it does deliver the just desserts.

I would have to say Lena is by far one of my favorite characters I’ve created. She is so completely self-absorbed and nuts you just never know what’s going to come out of her mouth.

She’s totally down for her dude. Territorial and possessive as well, she guards what is hers very carefully and woe to the bitch stupid enough to step to her. More than a little nuts, aggressive, combative, loyal, generous to a fault, loud and totally flawed. Human, for the most part, lol. Someone almost everyone can see either some of themselves in, or someone they would one day like to be. Or maybe someone they have nightmares about meeting in real life. That might be ok too. At least you’ll never forget her. *grins*

Ty might have to be my pick for favorite hero. He always gets his girl…cept when he doesn’t, lol. He would lay down his life and die for her. She’s the first thing on his mind when he wakes up and the last thing on his mind when he goes to sleep. Nothing else in life matters but her happiness and he would do anything, say anything, kill anyone (Danny, for sure, lol) to make sure she stays that way.

Dramatic, I know. But what can I say? We women want it all.

And besides all that, he’s just so damn wild and unpredictable. You know whatever you guys do together, you’ll probably be stumbling in at 5am looking disheveled. Rode hard, and put away wet, as my one friend Rona used to always say.

So what about you guys? What types of scenes and characters get you all riled? Leave a comment below! 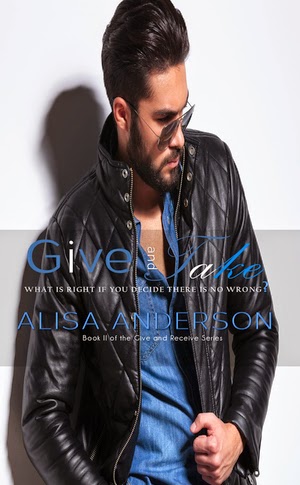 Give and Take by Alisa Anderson

Three friends, who struggled for fortune and fame, have finally found themselves thrust into mega-stardom.

What is right if there is no wrong…

For Ty, Lena and Danny, they're about to find out as they cross the boundaries from all things safe to an arena testing love, friendship and loyalty. An arena that's forbidden, taboo…and oh so tempting.

They’re riding hard and fast in a world where sex, money, love and rock and roll are all a game of give and receive, where any wish can be granted if you just ask...

Open, honest and raw, this is a rare glimpse of what happens behind the fortune and the fame, beyond the limelight, past the adulation and acclaim.

Her laughter faded, realizing where they found themselves.

She gradually became aware of him staring at her. With that unfathomable expression she never could decipher.

“I should go, Ty…before anything else happens we regret.” She cleared her throat.

“Not that anything happened before. Because it didn’t. But if it did…which it didn’t…let’s not do something we’ll both regret tomorrow.”

“I understand you feel that way. I can even empathize with your plight. But I suppose that’s the difference between you and me.”

He glanced up. Catching her gaze and holding it. Taking her in his mouth. Sucking her swollen clit with bruising intensity. Lena whimpered, her body taking control. Shoving herself into his face. Using her hands. Pushing him down deeper. Further.

She tangled her hands in his soft hair, yanking it. Smothering him. Pressing herself against his mouth.

He was suffocating. Couldn’t breathe. But stopping was not an option. Fucking her with his mouth, like his life depended on it, was.

She ground into him with brutal force. Ty groaned against her. Licking, twirling, circling his tongue around her clit. Drawing the fleshy lips of her labia into his mouth as well.

He bit down on her flesh, sliding his fingers inside her. Two fingers, then three.

“Release it, baby. Let me taste that cream. Jesus Fucking Christ…you feel so good in my mouth, Lena…give it all to me.”

He sucked her back into his mouth, squeezing her ass. Ramming her against his lips, into his mouth. Like he couldn’t get enough of her.

She finally cried out. Emitting a strangled, tortured sound. The force of her orgasm hitting fast, and sharp.

Ty continued lapping her up. Swallowing every last bit of precious nectar. The more he licked, the more the fire in her belly grew. She came, harder than before. Straight into his waiting, open mouth.

“Enough of what?” Ty asked, delving into her wetness once more. Placing soft kisses on her mound of damp curls.

Lena moaned, low and urgent. Resisting the impulse to move her hips over his. Feel him surge into her.

Like she wanted him to do all night long.

Wait…no. Dammit. No.
“Enough…of this. Stop it. I don’t want you to touch me.” Lena’s voice caught, uneven. She took a steadying breath. Calming herself.

She couldn’t believe she let him do this.

For the first time, she meant.

well...alisa did stuff and is still doing stuff. only now she has two boys crazy enuff to want her as their mommy. hey, at least she tried to warn them, so her job is done.

she doesn’t like to capitalize, partially because she likes how lower case letters look visually, but mostly out of laziness. please don't judge. it could be you. and she would say, hey. you're alright, buddy. you're ok in my book. now c'mere for a hug. the hug might be pushing it. air kiss? you are strangers, after all, with only a mutual love of poor grammar.
​
she lives for a world full of controllable anatomically correct, android men programmed to meet her specific feminine needs (wink, wink, nudge, nudge with a big waggle of the eyebrows). who look like the rock. and ian somerhalder. and idris elba. and that's it she promises. variety. gotta have variety, right?
​
but alas...apparently that exists only in johanna lindsey's genius mind. so until then, she enjoys her incredibly warped sense of humor. she reads tons of erotica and romantic, drippy goo that makes her heart go pitter patter. then she thought, hey. what, she said to herself. (softly, of course, so no one finds out she is indeed, 2 nuts short of a fruitcake) maybe you should write this stuff too.

maybe someone will like it and maybe buy it. so she said, huh, you think? then she said, well...yeah, i wouldn't have suggested it...(inserts sarcastic tone) and then she was like lose the attitude, ok? then she was all, would you just shut up and write, already? sheesh! and she did. :)

Does your mother know what you’re reading?

This indeed a very sexy scene.

Probably my favorite literary sex scene - well, broadly speaking - is when Rhett Butler carries Scarlet O'Hara up the stairs to her bedroom. You don't need to see what's going on behind those doors to feel the heat!

i love that scene as well....sometimes the best scenes are what you DON'T see, and let your imagination do the rest. thanks for having me today! -alisa :)

My most -recent favorite sex scene was in the EPIC-contest winning Private Dancer by Kimberly Dean. The plot itself is kind of silly, about a preacher's daughter who loves to dance, volunteering to work at a strip club to "convert" the patrons. Instead, she's the one who changes her viewpoint, and gets introduced to many ways to enjoy her dancer's body. There is a menage scene towards the end of the book, and it's a scorcher! Let's just say you need a fan and a cold drink afterwards!