By Anna Watson and Alicia Wag

Anna just devoured Devil’s Wake and Domino Falls by wife/husband team Tananarive Due and Steven Barnes, YA zombie lovefests where ok, there are one or two white characters, but most of the movers and shakers are Black, American Indian or Latina (and BONUS: the Latina character is a femme! she will fuck you up with her Glock, too).

Alicia goes back for comfort to Mary Stewart’s Merlin trilogy, over and over.

People, can we agree that there’s just something about genre?

So much of the time, however, the only stories getting told, even in these genres, are those of the straight, white majority, so we have to contort ourselves to find ourselves while we’re just trying to get a little comfort from the ur-stories that speak to us directly where we are. That’s asking a lot when you just want to plop down in your favorite reading spot and whooooosh yourself away for a few moments!

Due and Barnes have taken matters into their own hands, not only putting out their fantastic triology (waiting on that third book, you two!!) but finding a way to produce a Domino Falls movie, directed by a Black woman and starring Black actors. Take that, World War Z!

Currently, Black Girl Dangerous is doing a Privilege Bucket Challenge to bring attention to and counteract the way white voices drown out all others in the mainstream media. It’s not just the news outlets, of course, where white voices blah blah blah incessently, it’s everywhere. Up close and personal in the places we go seeking comfort, like graphic novels, science fiction sagas, door stopper fantasy tomes and yes, erotica. The pause that should refresh, unfortunately, can be more of an ass kicker for those of us who aren’t straight and white and male. And even those of us who are straight or white or male benefit from hearing another take on things.

We all need sanctuaries of love.

A genetically modified vampire of color here, a brave girl on an adventure into the mysterious everything there, and a female, feminist, warrior who runs into queers now and again even – we gather around us the stories that support and refresh us. Remind of us of who we are, who we would like to be, and, most importantly, reassure us that the world is, after all, filled with wonder and it is good to be here. We raise our sleepy, satiated eyes from the last paragraph, somehow ready again to dive into the trenches and do what needs to be done. 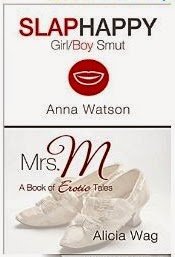 Which at last, brings us to Laz-E-Femme Press and our first publication, a Lust Double of sex/y stories. Sacchi speaks eloquently about this much-maligned genre in her earlier post and we would like to continue by pointing out that to provide the comfort, the sanctuary of good genre, erotica or other, is as radical an act as any fiery expose or news story. Not better, not worse – we need all of those voices, and we need all of those different kinds of stories. And we all need to rest. Really rest. Not “if-I-squinch-my-eyes-and-look-sideways-maybe-I-can-get-through” kind of resting, but real relaxation. We all need to see rich possibility, know worlds where the dominant paradigm has been resoundingly denied. We need to be able to find places we can trust to provide that necessary gift.

Alicia and Anna hope Laz-E-Femme Press will be one of those places. Slaphappy and Mrs. M put a few more erotica stories out there that aren’t misogynistic or poorly written, that aren’t so damn straight they boot you out the door (good erotica should cast a wide net) and that, despite being written by a couple of white ladies, allow room for different ages, identities, non-white and non-upper/middle class characters.

Hot, too. We should mention that the stories are hot!

Coming soon from Laz-E-Femme Press are novels, Tasty by Anna and At Your Service by Alicia. Talk to us on facebook, tell us who you are and what you’re looking for, send us links and suggestions, and most importantly: kick off your pumps and read!

That warm day in May, Consuela led me to the ice cream shop, where she ordered a chocolate cone for herself and a cherry vanilla one for me. She carried both to a table and nodded at the chair I was to use. I parked my hot ass down, and watched Consuela take the seat across from me. When she handed me the cone, I was salivating.

She rolled out her tongue first, showing it to me. It was long and pink, and curled at the tip. She brought the cold, wet ice cream to bear on the length of it, licking over and over, never taking her eyes off me.

Once she had the cone good and licked, she reached across the table and shoved it in my mouth, hard, so that I had to bite it to keep it from choking me. I laughed into the ice cream. I was loving it, even the shock of cold in my mouth and the pain in my teeth.

After supper, Ruthie went to the freezer and got dessert.

“I love ice cream,” said Sol as he spooned it up.

Ruthie smiled. “I know.” She leaned over and licked some from his lips.

“I’ve been wanting to do that ever since Toscanini’s,” she said. He sat very still. She left her chair, knelt beside him on the floor, and put her head on his lap. At once, she felt his big hand on her hair and he stroked and stroked. She moved between his legs and pressed her body against his chest and belly and crotch. She reached up under his sweater and felt his nipples through his thin undershirt—they were sagging some, but so what. We all sag eventually. She put her hand on his belly and felt the hair around his belly button. She moved her hand and Sol sighed.

“It feels good when you rub,” he said softly, so she rubbed there, and then she rubbed lower. “You’d better stop. I don’t know what will happen.”

She looked up at his face. He was an old man. His cheeks were red, covered with tiny broken capillaries, and his eyes watered.

Welcome back to Beyond Romance. I do hope your book is a huge success!

Hi, Lisabet, sorry for the delay (summer/fall respite) -- we just wanted to thank you for sharing this space, and for your awesome work! Alicia & Anna