A Day in the Life of a Writer…Or, Procrastination Central

One of the biggest problems I face as a writer is concentration. Not ideal when you're self-employed and mistress of your own destiny. There are so many distractions out there it's almost impossible to stay focused.
I mean, there's the research for a start. Unfortunately I don't get paid for the hours spent ogling half naked men for 'inspiration' or else I'd be a millionaire by now. Damn you Pinterest!

Working from home, although preferable to actually going to work, puts so many temptations in the way of a writer. The television and the fridge are my personal nemeses. I can't seem to write more than a chapter before I find an excuse to reward myself with an episode of my favourite show, or some chocolate.

Procrastination also stretches to social media activities. Authors are told to build up their online presence and become accessible to readers. Cue lengthy, very important, Twitter chats on the importance of a hero's beard. Then there's the sharing of cover art, and cat pics, on Facebook, which invariably leads to playing the Odd Socks game. A curse which can only be broken once one has run out of lives and matching pairs of socks.

Usually at this point of the day guilt will then set in and there's a vague attempt at actual housework. Whoops! Is it lunchtime already? Well then, I'll stalk my inbox for news and check my book sales.

Once all other avenues have been exhausted, it's finally time to write. I'm old school, and I like to make things harder for myself. I write longhand first, and, when I eventually decipher my own handwriting, I edit as I type. It's probably twice the length of everyone else's process but it seems to be the only way I can work. For no logical reason, the words flow better for me with a biro and a reporter's notebook than by typing straight into a document.
So, my pen is poised, but wait, I need to refresh my memory with what I had written yesterday. And you can't read without having a cup of tea…

Ah yes, I was leading up to the big love scene.
Now, there are said to be two types of writers – plotters and pantsters. Naturally, I claim to be neither one, nor the other. I'm something of a hybrid. Generally, I have an outline of the story, or scene, before I begin writing. However, my characters have a habit of hijacking my plans and steering the plot in a completely different direction from the one I'd laid out in the synopsis.

Before I commit pen to paper, I mull over the scene I want to create. Never underestimate the power of mulling.
'There was a heartbeat before Nate captured her lips with his.'…leads into the hot sex scene which will be completed another day since it's time to cook dinner.

And there you have it, the reasons my book releases are so sporadic - my brain is prone to unsanctioned vacation time without me. At present, I have two half-finished manuscripts. One is a contemporary romance between a wedding planner and a jaded Earl-in-waiting. The other, is a shifter ménage. Hopefully I will finish one before Brain decides it's time for another trip to La-La land!

Until then, I will leave you with details of my latest release from Totally Bound, Pyramid of Passion. Available on general release from September 12th. 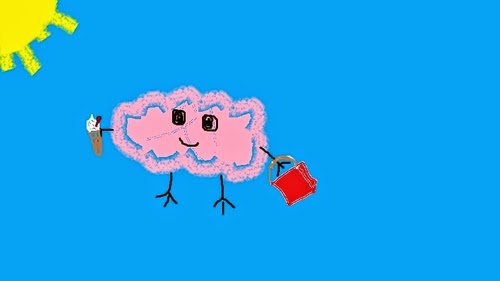 Oh, almost forgot! Leave me a comment on your favorite method of procrastination, and I'll throw your name into the hat for a book from my backlist. Don't forget to include your email address!

Rosie Carter can’t decide—should she act on her feelings for her real-life co-worker or lose herself in the fantasy of her Ancient Egyptian lover?

Rosie Carter’s cleaning job at the museum is far from boring. She starts her night shift by finding the security guard, Nick, screwing a redhead in the office. Running from her attraction to him, she distracts herself with the newly acquired Ancient Egyptian exhibit.

The Gold of Valor catches her eye—a pendant bestowed on the Pharaoh’s soldier, Edifu. Its mystical powers transport her into the bedroom of the man himself, who thinks she’s a gift from the gods and worships her with his mouth, his tongue… 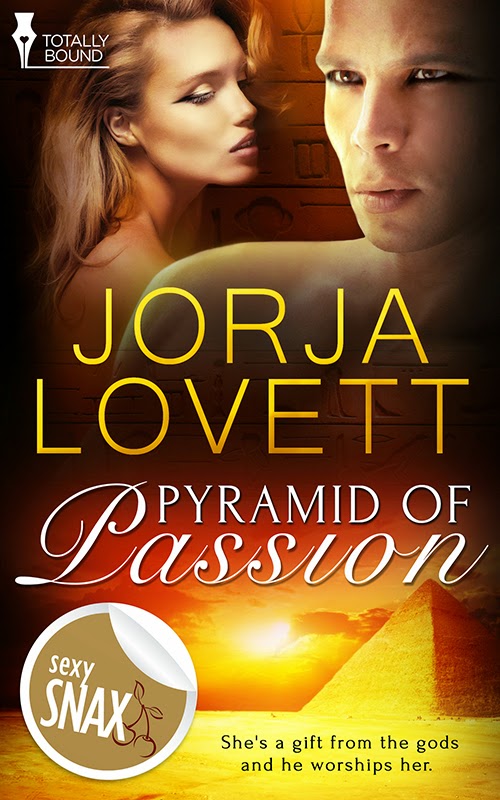 Excerpt
Rosie stood in awe as she was transported into a scene reminiscent of a lavish Hollywood production. With her path lit by a burning torch mounted on the wall, she could see the compact gallery had expanded, its neutral décor now a vibrant yellow adorned with colorful painted frescoes. A large bed filled the floor space, its wooden posts carved into what looked like animal paws. Like poor Alice down the rabbit hole, Rosie grew curiouser and curiouser and stepped forward to investigate.
A dark figure rose from the depths of the bed and sent her scrabbling backward onto a wooden chest. She landed atop it with a thud.
“I’m so sorry to intrude. I don’t know how on earth I ended up here.” Wherever here may be. Have I sleepwalked mid-shift? Am I dreaming?
One way or another, weeks of sleep deprivation must have taken their toll. How else could she explain her appearance in someone else’s bedroom with no knowledge of how she’d got there? Unless the combination of cleaning chemicals she’d used had created some sort of hallucination. She could have mistaken their smell for the heady incense that filled her nostrils and gave her that woozy effect she got after a few glasses of wine.
The occupant’s hulking silhouette left her in no doubt about his gender. Especially when he leaped from the bed, naked. Oh my! Rosie didn’t know where to look. So she started from the shaved head and worked her way down.
Dark eyes, black kohl lined in the Egyptian fashion Rosie recognized from history books stared back at her. She followed the muscular trunk of his long body, as smooth as his head, down to the impressive cock swinging freely between strong thighs. Out of politeness, she averted her eyes, then to make sure she hadn’t exaggerated, took a second look.
Common sense screamed at her to get out after finding herself alone with a naked stranger. But she remained seated, frozen to the spot. The vision before her too surreal to fear.
The living statue of masculinity knelt at her feet, with an arm across his chest and his head bowed. “Goddess Anuke, you honor me with your presence,” he said.
He sounded so sincere but Rosie fought a bubbling laugh. Dressed in her navy uniform, she didn’t see how anyone could mistake her for a goddess. “Sir, I think you’ve mistaken me for someone else.”
“My queen, mere moments have passed since I beseeched you for guidance on our forthcoming battle with the Hittites and traveling on the light of Ra you have appeared in my chamber.” Confusion shined in his almond-shaped eyes.
She stood up. Bless. She’d apparently stumbled into a mental hospital. A small sigh escaped her lips at the waste of such prime beefcake. “I am not a goddess or a queen. I’m just plain old Rosie Carter.”
The ‘patient’ rose to his feet and gave her an up-close and personal view of his anatomy. She found his appendage strangely hypnotic. With only experience of her now ex-husband as a lover, she could see exactly how much she had missed out on.
“Hmm. Your strange attire would indeed appear ineffective armor for the goddess of war. If you are not the goddess herself and she has not sent you, then perhaps Qadesh? Such a gift from the goddess of sexual pleasure would surely increase a mortal’s prowess on the battlefield tenfold.” He drew a thick fingertip from the hollow of her throat to the zipper on her smock. Rosie had gone from goddess to sex toy in one fell swoop.

Jorja Lovett is a British author with both Irish and Scottish roots, which makes for a very dry sense of humour. Writing since she was old enough to wield a pen, it wasn't until she joined her crit group, UCW, that she pursued her passion seriously.

Now, with Joe Manganiello as her permanent muse, if she can leave the pause button on her Magic Mike dvd long enough, she hopes to spend the rest of her days writing steamy romances.

What a fun post! I love your little brain. And the excerpt is fantastic, both sexy and very funny.

You're a talented lady. Thanks for being my guest.

you should try procrastinating by keeping up with the exploits of your favourite 80's pop throwback ;-) cpollock@ntlworld.com

Thanks for having me :)

Thanks for stopping by :)

Well, my favourite 80's popstrel would be Jordan Knight and not a certain owner of a jaunty hat ;)

Oh I put things off that I do not feel like doing at a certain time... just ignore it is there waiting, push it to the side, spend more time reading, lol!
greenshamrock at cox dot net

Yep, LastMinuteLucy, that's me too :)