K D Grace’s paranormal trilogy has had a makeover! The covers have been redone, along with a slight upgrade in the titles to better reflect their paranormal romance genre. The novels themselves are still both sizzling and chilling. And now they’re all dressed up for the summer heat. 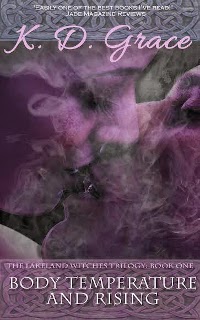 American transplant to the Lake District, MARIE WARREN, didn’t know she could unleash demons and enflesh ghosts until a voyeuristic encounter on the fells ends in sex with the charming ghost, ANDERSON, and night visits from a demon. To help her cope with her embarrassing and dangerous new abilities, Anderson brings her to the ELEMENTALS, a coven of witches who practice rare sex magic that temporarily allows needy ghosts access to the pleasures of the flesh. 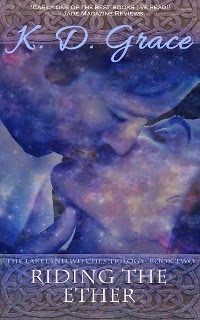 Cassandra Larkin keeps her ravenous and dangerous sexual appetite secret until she seduces Anderson in the mysterious void of the Ether. Anderson is the sexy, insatiable ghost who can give her exactly what she needs.

But sex is dangerous in a place like the Ether…

When the treacherous demon, Deacon, discovers the truth about the origin of Cassandra’s powerful lust, he plots to use her sex magic for revenge on Tara Stone and the Elemental Coven, who practice their own brand of sex magic.

Cassandra must embrace the lust and sexuality she fears and learn to use its power. Will she stand with Anderson, Tara, and the Elemental Coven against Deacon’s wrath or suffer the loss of friendship, magic and love? 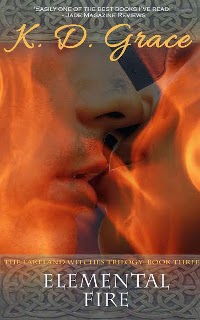 Obsessed with revenge, KENNET LUCIAN makes a deal with a demon, a deal he comes to regret when he meets TARA STONE, head of the Elemental Coven, and a powerful witch with a desire for revenge at least as great as his. Even though the attraction between the two is magnetic and the lust combustive, Kennet must betray her to accomplish his goal, which is ultimately her goal as well; to put a final end to the demon, Deacon’s, reign of terror. But can Tara trust the man who has wormed his way into her heart and the heart of the Elemental Coven? Can she trust LUCIA, the demon with whom Kennet is allied, a demon with her own agenda. The path to Deacon’s destruction is far from clear, and the price that must be paid to be free of him forever may be too high, even for Tara Stone.

DEACON, the demon Marie has unleashed, holds an ancient grudge against TARA STONE, coven high priestess, and will stop at nothing to destroy all she holds dear. Marie and her landlord, the reluctant young farmer, TIM MERIWETHER, are at the top of his list. Marie and Tim must learn to wield coven magic and the numinous power of their lust to stop Deacon’s bloody rampage before the coven is torn apart and more innocent people die.

Excerpt: Body Temperature and Rising
The image of a dark figure approaching her through the fog tightened her belly and her nipples, and yet at the same time sent shards of ice down her back. It was a dream, she told herself. Surely it had to be, as she gathered herself to run.

It was a gentle touch of her arm that woke her with a start, and she looked up into the dark eyes of Anderson. ‘Come with me, out of the rain.’ He offered her his hand and helped her to her feet. She was amazed to find that he was still in the black suit, no anorak, no water proofs, no proper walking boots.

‘I lost my compass,’ she said.

‘I’m very sorry to hear that,’ he replied.

Almost before she knew it they were descending. ‘Don’t worry,’ he spoke close to Marie’s ear. ‘I know the fells like I’ve lived here forever.’ Once we get to Grange, Tara will be waiting for us.’

He made no attempt to explain who Tara was, nor did he introduce himself. That was her first clue that he might have been aware of her voyeuristic escapade.

‘We’ll be down before you know it,’ he added, turning his face into the storm.

But they weren’t. The weather worsened to a downpour. Bent double in the wind, Marie was soaked to the skin and shivering by the time Anderson pulled her into a cave that she hadn’t even seen until they were safe inside.

‘We’ll wait it out here,’ he said. He offered her a smile and gestured around the cave. ‘There are lots of caves and quarries around the Lake district. Some are fenced off for the protection of curious tourists, and others, like this one, most people don’t know about.’

‘And your girl friend, won’t she be worried?’

The tolerant smile he offered made her aware of her mistake. ‘Tara knows what I would do in such weather.’ Then he added, ‘Though she’s very dear to me, Tara’s not my girlfriend.’

Before she could say anything he chuckled softly. ‘I know that you saw us together, and there’s no need to apologize. Neither of us was upset that you enjoyed our love making. In fact we rather hoped it would please you. Besides one must certainly expect such encounters when one chooses the middle of a well-traveled path for a rendezvous. Now remove your shirt for me, please.’

When she balked, he added. ‘You’re cold and wet. I only wish to make you more comfortable and prevent you catching your death.’ He had already shed his jacket and handed it to her. She was astonished to find it completely dry. ‘You may wear this.’

K D Grace believes Freud was right. In the end, it really IS all about sex, well sex and love. And nobody’s happier about that than she is, otherwise, what would she write about?

Welcome back to Beyond Romance, KD! The new covers are gorgeous. I hope the relaunch leads to deserved mega-sales!

Thanks for having me over, Lisabet! Always a pleasure to be here! And thanks for letting me show off my new covers for the Lakeland Witches!