Voyeurism: Why It’s So Much Fun to Watch

Do you remember the Sharon Stone film Sliver? It’s from 1993, which seems so long ago at this point. Sharon Stone lives in an exclusive apartment building in New York. She ends up having a fling with the guy who owns the place, a younger man who has wired cameras into all the apartments. She walks in on him in his secret room watching a dozen screens of residents doing all sorts of things, including having sex, though that’s not the limit to his compulsion. 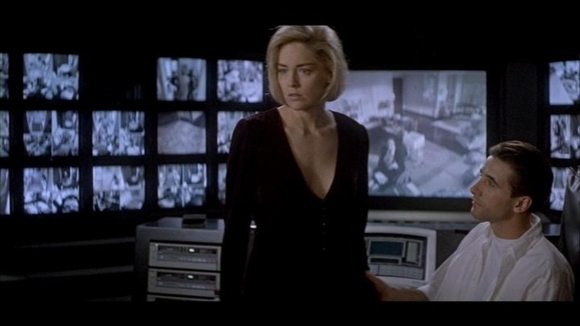 Sharon’s shock doesn’t last for long. She’s fascinated by watching these people too, and she sits down and joins him. Together they eavesdrop on her neighbors.

At the time, I didn’t really understand her response. Why the hell wasn’t she angry? I sure would have been!
The film stuck in my mind anyway.

That was my first encounter with voyeurism. I just didn’t know it at the time.

It was only later I realized it was just a kinkier version of Rear Window, where Jimmy Stewart’s character spies on his neighbors with binoculars and a zoom lens—a low-tech Sliver. He even gets his cleaning lady in on the action. 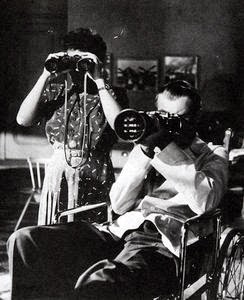 Originally, voyeurism was classified as a sexual disorder. If Jimmy Steward would rather stare out the window than pay attention to Grace Kelly, I agree, there’s something wrong there. People didn’t make out in films in 1954, but that choice is implied.

Flash forward to about five years ago.

I was watching a television show where some intelligence agents have to keep a suspect under surveillance. The guy’s into prostitutes, and the agents watch him with one particular woman several times. One of the guys really gets into watching these two together. He stays in to the surveillance room even when he’s off duty, just to watch.

I was fascinated by this. Everything clicked for me. I even liked the idea of that agent watching the couple. It kind of turned me on.

And it gave me the kernel of an idea that eventually became Bound for Trouble. 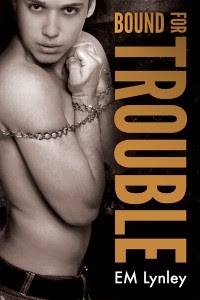 What if my character’s main interaction with the other MC was watching him? It starts out as work. He’s an FBI agent and the other MC is a hooker he sends in to get information. The more he watches the guy with someone else, the more he wants him. He has cameras in the informant’s apartment, so he can see him in a very intimate way, not just with the target, but on his own. My agent gets to know the informant with almost no interaction.

I got to indulge in a lot of my own fantasies in this book, and I admit to getting pretty steamed up even during the editing process—a first for me. Usually by that time I hate the book and the characters. This time, I found the scenes having a similar effect on me and Deke. I kept slowing down to read them in full. And to needing some cold showers.

I certainly hope those scenes have the same effect on my readers!

What makes us enjoy watching others so much? For me, I can put myself in a situation I may never actually get to experience. That’s a powerful lure. Whether it’s fear or a lack of opportunity, there are plenty of things we’d like to try, but will never get to do. Why shouldn’t we enjoy watching someone else doing it?

Part of the fun at sex club is watching what the others are getting up to. Even watching other patrons at strip clubs and how they interact with the dancers is exciting in a different way than participating ourselves. And in the best situations, watching gives us ideas to try out with our own partner.

I could go on, but it’s getting hot in here again.

So, what’s your take on voyeurism?

Please check out my latest release, Bound for Trouble.

Daniel “Deke” Kane is a broken man, facing the end of his career in the FBI. He’s on desk duty after a botched drug raid left the suspects and two children dead. He’s got one chance to prove himself, or the only thing he’ll be investigating is the Help Wanted ads.

Ryan Griffiths has been on the run for ten years. Forced onto the streets when his father kicked him out, Ryan earns his living in other men’s beds. Finding his john dead in a hotel room drives him under the radar until a favorite client gives him a chance at a safe, clean life. But Ryan’s relatively stable new world shatters when Deke Kane catches up with him.

About EM Lynley
EM Lynley, a Rainbow Award winner and EPPIE finalist, has worked in high finance, high tech, and in the wine industry, though she'd rather be writing hot, romantic man-on-man action. She spent 10 years as an economist and financial analyst, including a year as a White House Staff Economist, but only because all the intern positions were filled. Tired of boring herself and others with dry business reports and articles, her creative muse is back and naughtier than ever. She has lived and worked in London, Tokyo and Washington, D.C., but the San Francisco Bay Area is home for now.
She is the author of Sex, Lies & Wedding Bells, the Precious Gems series from Dreamspinner Press, and the Rewriting History series starring a sexy jewel thief, among others.

Welcome back to Beyond Romance, EM!

Voyeurism can be truly hot, but it has to be done well. It's all too easy to fall into stereotyping. And of course, it's much more difficult to describe voyeurism than to portray it in a visual medium like film.

Anyway, good luck with the book - sounds like a great story!

Hi Lisabet,
That's true. I try to show how Deke feels, physically and emotionally, while watching. And because in a few scenes, he's not the only one watching, it's got another dynamic going on. It was fun to put him in both sexy and awkward situations.

I find that reading sex scenes in books have that effect on me. I read the words and picture them in my head and it is as arousing, or maybe more arousing, than watching. I like my reading with lots of sex and am glad it is more easily available today.

Voyeurism is extremely sexy and naughty. I had fun using it in my first published short story.