What if homophobia wasn't a problem?


Hello everyone. Let me start by saying thanks to Lisabet for having me here today.

I am a brand new author with Totally Bound Publishing or anywhere else for that matter. I always wanted to write but it wasn’t until last year that it started to click for me. For some reason, it was my discovery of M/M romances that kicked it off. I wrote a few short stories at first but was having trouble coming up with a longer project.

In M/M romance, homophobia and prejudice are widely used for obvious reasons. But things are changing, hopefully. Until I moved recently, I lived in a small town for eight years. Very small. In the Bible Belt. While my personal views didn’t line up with most of the area, the people were great. A good deal of them anyway. So when I was kicking around ideas for a longer project I started wondering. There were all these books where the small town kid is reviled and driven out when he is discovered to be gay. Well, what if a town did the opposite. What if they accepted him just as he was?

And I had a character. James Hara, a small town kid who was not only accepted but becomes a big part of the community as an adult. A well-adjusted man with a strong sense of humor. Somebody that has had the good fortune of being exactly who he is, out in the open all his life. What if he fell for someone who has never had that? Who had good reasons for staying quiet about who he was. There was my story, Here For You, and Totally Bound Publishing shocked the hell out of me when they offered me a contract for it.

Welcome to Deacon, Oklahoma. Straight population—seven hundred and ninety-six. Gay population—James Hara. Except it really isn’t that bad, because when he came out to his hometown, something wonderful happened. They still loved him…most did anyway. The only problem is the lack of a dating pool.

Then he meets the new firefighting volunteer and he has a bigger problem. Mason is gorgeous, friendly and straight. Soon James is doing his best not to fall for his new friend. Hard to do when Mason is everything he dreams of with his humor and flashes of vulnerability.

But after a set of stressful events, he finds that maybe it is not impossible after all. If he can be patient with a man wounded by his past. 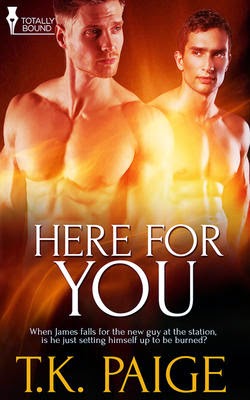 He was about six feet tall, which made him an inch or two taller than me. He was also a bit broader than me, and it was definitely a bigger bone frame that gave him the size. His white T-shirt was a little tight and wet, clinging to him in such a way it proved beyond a doubt the guy was fit. He wasn’t in any way close to being a freak of nature or body builder type of muscle bound. But he was definitely built. I was so glad that today was truck washing day.

His face was turned partially away from me so I couldn’t see his eye color or the exact shape of his face without tipping everyone off to what I was doing. So I just took in the dark brown hair with a little bit of a red tint to it. Cut a little long and shaggy, it looked casual and I liked it. It was a nice length. Just long enough to hold on to while you… Better stop that train of thought before certain parts of me proved that they still functioned in spite of the ‘dating drought’. If I wasn’t careful, I’d end up giving Tosh more ammo for later.

Too late. My phone gave the message tone assigned to only her texts. I mentally kicked myself for picking that particular one when I was ticked at her the other night.

Kent turned and asked, “Is that a braying donkey?”

“Let me guess. That’s Tosh texting you.” He didn’t say it as a question, just assumed it was his wife.

“You didn’t use the crazy bitch one?”

I sighed and explained for the new guy’s benefit. “I was annoyed, not pissed off this time.”

It looked like it took some effort, but Kent managed to choke down his laughter and turned back to the newbie. Poor guy was looking a little confused at the thought of a volunteer having those ringtones set for the fire chief’s wife.

Kent took pity on him and explained. “This is James Hara. He is my wife’s best friend. Has been since they went to college together. James, this is Mason Sullivan. He just moved to the area and wants to help out.”

While I traded hellos with him, I finally had the chance to look him fully in the face. I just about swallowed my tongue.

T.K. Paige picked up her first book to read around the age of four and hasn’t stopped since. She discovered the M/M genre in August of 2012 and an addict was hooked.

If you see her and she is not reading, then she is thinking about the books that live in her head. It doesn’t matter what else she is doing, it is guaranteed half her brain has a plot running through it.

A stay at home mom for more years than she would like to think about, she is lucky enough to be married to a wonderful guy who encouraged her to write throughout their years together. Then when she finally did it and she told him what she was writing, he turned only slightly green and asked “Do I have to read it?” Apparently, he had dreams of her being the next Urban Fantasy sensation with her taste in movies… We won’t tell him what she watches when she is alone all day folding laundry.

I love hearing how the premise for a book came about. But you're killing me, Tk! I have to write! (okay, as soon as I get this story done, I am so opening my Kindle!)

Hello, TK! Congratulations on the release, and on your new career as an author! This sounds like a great book. M/M is extremely popular, so I expect it should do very well.

Thanks for being my guest. I hope you'll come back to tell us about your next book!