My name is Lisabet, and I write erotica.

Some readers, I know, will stop right now, nervous about being subjected to material that might make them uncomfortable. Don't worry, I promise not to include anything the least bit explicit in this post. Other readers will nod sagely, imagining the sort of stories I might produce: lots of body parts and little if any plot; cardboard characters whose primary characteristics relate to their bra cup size and genital endowment; meaningless, anonymous sexual encounters in which the only goal is to have as many orgasms possible.

That's not erotica. At least, not the sort of erotica that I write.

Erotica - at least the kind of erotica I enjoy reading and writing - deals first and foremost with the complex and contradictory emotions associated with sex. This includes lustful attraction, to be sure, but also guilt, fear, grief, curiosity, the temptation to take risks, the pride of breaking down barriers, the joy of sharing pleasure. Not to mention love. Romance does not have a monopoly on that emotion.

Let me give you an example from my back list. Citadel ofWomen is not a romance, primarily because it lacks an unequivocally happy ending. Nevertheless, it is a story that is as much about love, loss and loneliness as about sex. Doa is a strong, self-confident woman from New York City. When her lover severs their relationship just before a long-planned trip to Angkor Wat, Doa stubbornly decides to travel alone. The marvelous sights of the ancient Khmer empire do little to heal the rift in her heart. Che, the mercurial young man who serves as her tour guide, offers her comfort and passion which Doa allows herself to accept. Meanwhile, he has his own history of terrible loss. Doa and Che connect on a level that goes far beyond the physical – but how can two people from such different worlds have a future?

Citadel of Women includes several sex scenes. The story, however, is about how Doa and Che get drawn into a sexual relationship, how it changes them, what they learn about themselves and each other - not about the sex itself. I'll admit that the story would suffer if the sexual encounters were not arousing. I truly hope that they are. The rest of the tale wouldn't be believable if the passion didn't feel real and immediate.

I'll leave you with a short, PG-rated excerpt from Citadel of Women, which I hope will help make my point. The physical aspects of sex are uninteresting without a background of emotional complexity. Truly satisfying erotica requires three-dimensional characters and serious conflicts, not just bodies. 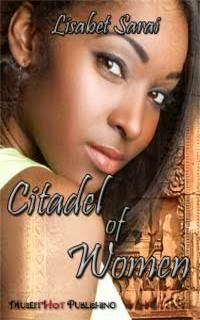 Dinner was served on the hotel terrace overlooking a small garden. The moist air was a soft, heavy blanket, laced with the scents of jasmine and mosquito coils. Two dim bulbs lit the scene with a golden glow. Our group sat together at a long table, consuming spicy fish, garlicky vegetables, and mounds of rice. I sat at the far end, nearest the garden, listening to the multi-lingual chatter, the clink of silverware, the droning of the insects in the trees. I had never felt so alone.

All at once, he was there, settling his loose-limbed frame into the chair across from me. He plunked an amber bottle misted with condensation down in front of me. “You look like you could use this.”

He took a swig from his own beer. Not knowing what to say, I did the same. The icy liquid slid down my throat.

I nodded and drank again before turning the bottle to examine the label. “Angkor Beer?” I laughed.

“Why not? One of our leading exports.” He tilted the bottle back. I watched his brown throat move as he swallowed. “Possibly the only thing most people know about our country.”

“Really?” It was difficult to talk to him, difficult not to stare at his mobile, expressive face. Fortunately, the beer offered a convenient alternative to conversation.

We drank for a while in silence. I wondered how I could politely excuse myself.

He replaced his bottle on the table. “You really miss her, don't you?”

My eyes filled with tears. Somehow, though, it was a relief to admit it to someone, even to him. “Yes. Yes, I do.”

“Is she your lover?” I'd read Cambodia was a conservative country, but Che didn't seem shocked by the idea at all.

“Was. She broke it off just before we were supposed to leave on this trip.”

“Why?” The question was completely inappropriate, but I could see he wanted to know.

I buried my face in my hands. What could I say? How could he ever understand?

I heard the scrape of his chair as he rose. His hand rested briefly on my bare shoulder. “Whatever the reason,” he murmured, “I think she was crazy.”

By the time I looked up, he had returned to his seat at the other end of the table. “Make it an early night,” he told the group. “We've got to be up at five tomorrow.” He did not look at me again, but still the imprint of his fingers lingered on my flesh.

Email ThisBlogThis!Share to TwitterShare to FacebookShare to Pinterest
Labels: Citadel of Women, emotion, Erotica, tab a slot b

I really like what you say above: "Truly satisfying erotica requires three-dimensional characters and serious conflicts, not just bodies."

For me, that's the difference between stories I skim and stories I read, and the characters and conflicts are why erotica still interests me after reading and writing so many stories.

It's a cliche but still true: there's no accounting for personal tastes. Perhaps the sex in the story you mention was sufficiently extreme that it made the reviewer uncomfortable and distracted her from the emotional interactions.

Also, in romance, "emotion" pretty much always means "love". Erotica can explore a host of other emotions, including guilt, anger, loneliness, rebellion... the list is almost endless.